Gore Hits the Waves with a Massive New Houseboat

Former Vice President Al Gore, the Nobel-winning self-proclaimed global prophet of green, has made a lot of money from the so-called “crisis” of global warming. He has profited from best-selling books that tout the looming climatic catastrophe, won an Academy Award for a movie about his slideshow presentation that focuses on his “sky is falling” message about a world on the brink of environmental disaster.

His business interests have been focused on the profit side of the equation when it comes to “global warming,” creating a “carbon credits” program that has put millions of dollars into the pockets of Gore and his environmental cronies. There are also financial interests benefiting from the sudden shift to the ‘environmentally friendly’ light bulbs that he has trumpeted so loudly: his friends at General Electric stand to make big money from the congressionally mandated demand for their new light bulbs.

There is no question that the alarmism and doomsday scenarios spread by Al Gore have been very, very beneficial to him personally and professionally.

But the question persists as to whether he actually buys into what he is selling. His own behavior clearly indicates that he doesn’t believe we are at a “tipping point” of worldwide environmental destruction. While he preaches that the rest of us must dramatically change our lifestyles and lower our standards of living to “save the planet” he lives by another set of rules himself.

It happens in the air, where he jets about in private planes that consume massive amounts of energy to spread his message of “conservation.”

His hypocrisy is revealed on land, where he travels in fleets of limos and SUVs to deliver speeches about the dire consequences of ignoring “man-made global warming” — and leaves the cars running throughout his entire speech in order to ensure that they will be nice and cool when he exits the building and returns to his gas-guzzling vehicles.

His supposedly “green” mansion consumes electricity that dwarfs the consumption of the typical family home.

And now, in order to complete his hypocrisy trifecta, Al Gore may now be extending his excessive consumption to the water as well. In an amazing display of conspicuous consumption, even for Al Gore, his new 100-foot houseboat that docks at the Hurricane Marina in Smithville, Tennessee is creating a critical buzz among many of his former congressional constituents. Dubbed “Bio-Solar One,” which may reflect some latent Air Force One envy, Gore has proudly strutted the small-town dock claiming that his monstrous houseboat is environmentally friendly. (Only Al Gore would name his boat B.S. One and not get the joke. Or perhaps the joke is on us?)

The boat is a custom-built Fantasy Yacht built specifically for Gore by Bill Austin of Sparta, Tennessee. 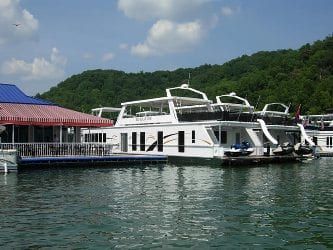 According to Austin, the engines are bio-diesel fueled and Gore can expect to use about two gallons an hour to cruise Center Hill Lake. With a 500 gallon capacity Austin says Gore won’t need a refill for “two or three years” though he admits having “no clue” about where Gore could get bio-diesel at the lake. The Hurricane Marina dock doesn’t sell it.

[Continues, with more pictures, on page 2]

“This boat is going to be the Toyota Prius of the houseboat business,” Austin proclaims. “It is the most eco-friendly houseboat anywhere in the country and is going to revolutionize the houseboat industry. People are increasingly worried about high gas prices and this is the answer.” Austin claims that the “Bio-Solar One” will create 40-50% less carbon emission and use half the fuel of other similar houseboats. “Gore will consume a lot more fuel driving to and from the lake than he will ever use cruising on this houseboat,” Austin asserts.

The solar panels have not yet been installed but are expected to arrive from Reno, Nevada “any day” and will be in working order “soon,” says Austin.

When the solar panels are installed the Gore boat could power itself and “most of the dock” according to Austin. In the meantime, however, Gore is plugged into the dock as his primary power source. 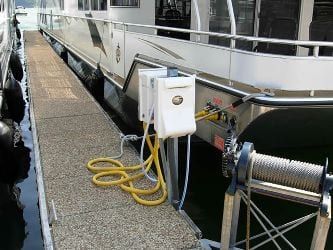 Austin says he has several other potential customers interested in following Gore’s lead. Austin professes reluctance to talk about “other folks business” but notes that a houseboat similar to Gore’s will cost between $500,000 to a million dollars. Austin believes that Gore’s “Bio-Solar One” will set the stage for a lot of sales. Land, air and now the sea. Will space will be the final frontier?

Let’s not forget: Gore made similar claims about the environmental benefits of the solar panels and other “green” additions he made to his 10,000 square foot home in Belle Meade, a cushy neighborhood in Nashville, Tennessee. The environmental savings promised from his “investments” failed to produce the results that he touted. In fact, his “energy efficient” renovations to his home actually INCREASED his electrical consumption by 10% rather than producing the promised reductions. Ultimately, Gore’s water-based excursions on his giant houseboat may prove more environmentally friendly than his fleet of limos, his private jets or his mansion. Perhaps the B.S. One will never live up to its nickname, but the jet ski on the boat is clearly powered by something other than solar or bio-diesel. 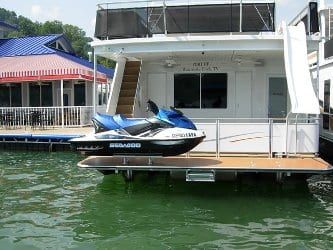 Maybe Al is buying carbon credits from himself to offset that particular energy usage.