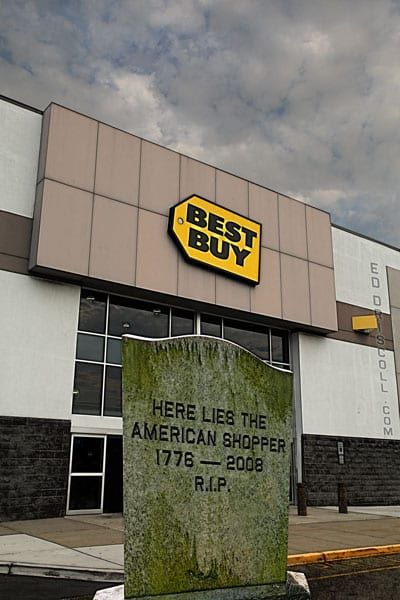 Best Buy shares surged last week on news that the troubled big box electronics retailer managed to turn a profit last quarter despite weak holiday sales. Sure, $293 million might not seem like big bucks when a Wall Street titan like Warren Buffett is busy setting an annual record return of $19.5 billion (up about 25% from 2012) — but it’s not bad for a company many had written off not too long ago.

Best Buy’s sales were actually down a bit from the same quarter the previous year, indicating that the newly private company has been cutting its way to prosperity. While cutting workers and closing stores have bought BBY some breathing room, that’s hardly a sustainable business model.

Growth is the key to sustainability, and that’s where Best Buy — a microcosm of the New Normal if there is one — is faltering. Consumer spending is 70% of the U.S. economy, and even as we prepare to enter our sixth year of recovery, the American consumer remains tapped out. Meanwhile, the party on Wall Street makes The Wolf of Wall Street look like a quiet afternoon with the ladies who lunch.

The problem faced by those of us who aren’t on the receiving end of the Fed’s largess — I mean “quantitative easing” — is best summed up by William Briat in a recent piece for Yahoo Finance. Briat writes that weak retail sales can’t be blamed on bad weather:

The biggest declines in the retail sector were from motor vehicle and parts dealers (-2.1%); sporting goods, hobby, book, and music stores (-1.5%); department stores (-1.5%); and clothing and clothing accessories stores (-0.9%). These four industries are more representative of discretionary spending than essential services, like food.

Having said that, at the other end of the spectrum, essential retail sector services, like food and beverage stores (which include grocery store stocks) and gas stations, experienced month-over-month increases.

Gas station sales going up during a period of overall weakness is, I think, the telling detail. Gasoline demand is relatively inelastic, especially during the winter months when Americans don’t usually enjoy many road trips. We’re hunkered down for the cold months, paying down the Christmas bills, and generally doing only as much driving as we need to. Yet despite this season of weak demand, gas prices jumped an average of 17 cents in the last three weeks, an increase of 5%. That looks great for overall retail sales, which reflect the increased costs for filling our tanks. But it means we have less money to spend on the things we want. In other words, weak retail sales were even weaker than they appeared, once you account for the “gas tax” of higher gasoline prices.

This might be a good time to mention that fourth quarter growth last year, previously reported to be a strong 3.2%, was “unexpectedly” revised downward to 2.4%. “Do women know about shrinkage?” They must, when it’s by a third.

So why is Wall Street so happy, setting record after record during what was by most accounts a dismal February? The short version is, Wall Street hates good news and loves bad news. Good news means that Fed Chair Janet Yellen might actually get serious about this taper business and cut off the flow of easy money. Bad news (for you and me) means good news for Wall Street as the funny money keeps propping up their bubble-tastic securities valuations. That money is supposed to trickle down — remember when that was a bad thing? — from Wall Street to Main Street, but Lee Adler says that “it’s not reaching the average American”:

Even with the 1% disproportionately boosting per capita spending; even with foreign shopping tourists invading the US in droves to get bargains at northern border Walmarts or Fifth Avenue and Rodeo Drive shopping districts catering to rich Europeans and Asians, the trend of sales per capita is as flat as a pancake. There’s been almost no growth in the past year. The volume of sales per capita grew by 0.7% over the past 12 months. With the 1% and shopping tourists fattening those numbers, it’s a good bet that most Americans actually bought less stuff this January than they did a year ago.

We’re spending more — being forced to spend more — on health insurance, on light bulbs, on gasoline, on food. That means we have less to spend on the things we might want, like cars, entertainment, travel. Best Buy had to cut to the bone, just to put a little money in the bank — does that feel at all familiar?

But rest assured that our endlessly vacationing and golfing president feels our pain.