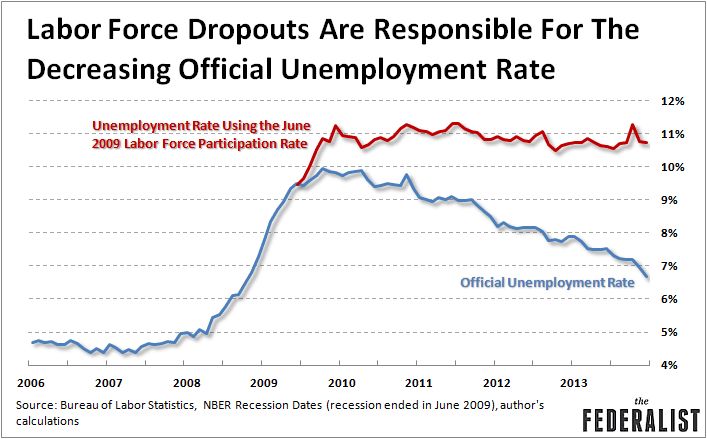 The United States is evolving from the most production nation in the world to a nation which does not work. Welcome to the Total Dependency Economy.

You’ve probably already seen December’s dismal jobs report. The headline number looked pretty decent at 6.7, down three tenths since November. But not even the panel on MSNBC’s Morning Joe could mask the disheartening numbers below the headline. Joe Scarborough called last month’s 74,000 net new jobs “a horrific number,” and Michelle Caruso-Cabrera added that the report was “very, very bad.”

Worse was the labor force participation rate as spotlighted by the scary-ass chart above from the Federalist, which dropped to a 35-year low. And perhaps most frightening was the fact that another 347,000 Americans left the labor force last month, some due to age but many due to despair. Cox Radio’s Jamie Dupree notes that for the last quarter of 2013, the labor force shrank by an ominous average of 45,000 a month. October looked strong as 659,000 people entered the workforce for a change, but that gain was utterly wiped out in November and December, when not even the promise of temporary holiday work could tempt people back into the labor pool.

We can excuse some of December’s lousy figures on the lousier weather, but AEI’s James Pethokoukis says the weather isn’t entirely to blame:

The big debate in Washington — aside from Bridgegate that is — is over just how long to extend unemployment benefits. Republicans are eager to allow a three-month “temporary” extension, to give Congress and the White House time to find corresponding budget cuts. The White House doesn’t want any cuts anywhere, because even with continuing record deficits, cowboy poets must also remain dependent on Washington’s largess. The State Department last year spent $5.4 million on “exquisite crystal glassware.”

Meanwhile, a record 92,000,000 Americans aren’t in the labor pool, and total employment remains below where it was at the start of 2008, before the Great Recession.

Which brings us to the Total Dependency Economy.

Under Keynesian theory, the government should keep a surplus during good times and go into debt during downtowns. The extra spending increases “aggregate demand” which in turn arouses the “animal spirits” driving up “consumer confidence” and thus consumer demand brings the economy out of recession. Never let it be said that economics isn’t a hard science, yo.

The fact is, however, that the economy became addicted to cheap money (low interest rates) during the Go-Go Nineties — and never kicked the habit. A series of of crises since then — 9/11, the banking collapse, the never-ending jobs recession — have kept the economy on Washington’s methadone drip.

President Bush’s huge wartime deficits helped to keep the economy humming, and to mask the inherent weakness in the economy. Thanks to Bill Clinton’s Community Reinvestment Act and Alan Greenspan’s low interest rates, trillions of dollars were funneled into the housing market, rather than into productive assets. That misallocation of capital resulted in shrinking productivity gains throughout the Bush years.

A cocaine addict has to snort more and more to get less and less effect, eventually going broke just in order to keep from feeling too much worse than he felt before he started snorting all that coke.

We’re now an extra $7,000,000,000,000 in the hole, with an additional three or four trillion in Uncle Ben’s Funny Money™ floating around, in the fifth year of a recovery which has yet to actually recover for tens of millions of Americans. The coke addict refuses to quit until he hits rock bottom — friendless, moneyless, and without even his next fix to look forward to.

What will it look like when America finally hits our rock bottom?