Review: Obama: The Greatest President in the History of Everything

When the historians of a bygone future sit down to craft the chronicles of our age, Frank J. Fleming’s magnum opus, Obama: The Greatest President in the History of Everything, will, doubtless, provide the impeccable first draft.

Nay, it stands even now as the definitive work on the man, his historic presidency, and his ephemeral excellency — challenging perhaps even Laughing at Obama: Volume I (the latter by the celebrated, acclaimed, and transformational author of this review). 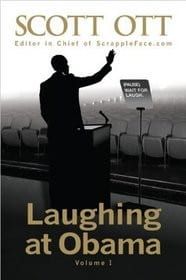 Employing the kind of meticulous scholarship and neat penmanship, that have become the hallmarks of his oft-quoted blog, IMAO, Fleming brings Obama to life in a way one might expect only from Dr. Jack Kevorkian’s doppelgänger.

With exhaustive research, drawing upon still-classified, heavily-redacted documents, Fleming lays bare the brutal facts of an administration launched upon hope, but rapidly gone awry. And yet, critiques of George W. Bush comprise only a mere majority of Fleming’s Obama. It’s as if the author has absorbed the generous, responsible spirit of his subject, refusing to dwell on the past.

The book offers clear-eyed analysis of what makes Barack Obama better than the best and brighter than brightest, in side-by-side match ups with a sorry catalog of pale imitations — from George Washington to Ronald Reagan. With a sense of pathos rarely seen outside of the pages of Popular Mechanics, Fleming brings the reader to the edge of an abyss of despair, weeping for the 43 chief executives consigned to the index of Obama history. But then Fleming lifts us triumphantly to the revelation that all of recorded time is, in reality, HIS story.

Of course, critics may note that writing a laudatory biography of Barack Obama is a task so simple, it’s akin to snapping an alluring photograph of Nancy Pelosi (just randomly press the shutter from any angle). Yet, Fleming deserves credit for shining the spotlight of scrutiny on Obama, even if that light is inevitably out-shined by the inner glow of the subject himself.

Unfortunately, my enjoyment of the book was interrupted at all-too-frequent intervals by inappropriate laughter which I attribute to some medication I’ll soon be taking, rather than to any flaw in Fleming’s presentation of the president. It was shameful of me to react to such an important tome as if it were a chuckle-worthy, guffaw-stained satirical lampooning of the president. I beg the author’s forgiveness, and hope he will speak well of me to Mr. Obama at the White House reception in honor of Frank J. Fleming’s first Pulitzer Prize for literature.

You can purchase Obama: The Greatest President in the History of Everything at Amazon.com

Scott Ott co-hosts a news, commentary and humor show called Trifecta on PJTV. He created and hosted the 20-part series on the Constitution titled Freedom's Charter. His satire site, ScrappleFace, spawned three books and praise from Rush Limbaugh, Glenn Beck, Mark Levin and many others.
Read more by Scott Ott