All CSUN students registering for the 2015 Fall Semester are being forced to participate in an online, SIMS-style character game about sexual assault before being allowed to claim a seat for any course.

The game, titled “Agent of Change” and designed by feminist activists, does not allow students to complete the game until they have given enough “correct” answers as per the designers’ stated philosophical influences, such as “norms challenging,” “feminist theory,” and “social norms theory.” According to the Agent of Change website, the program helps users “see the connections between these power-based violations, how these problems affect their lives, and what they can do to challenge the cultural norms that help sexual violence flourish.” 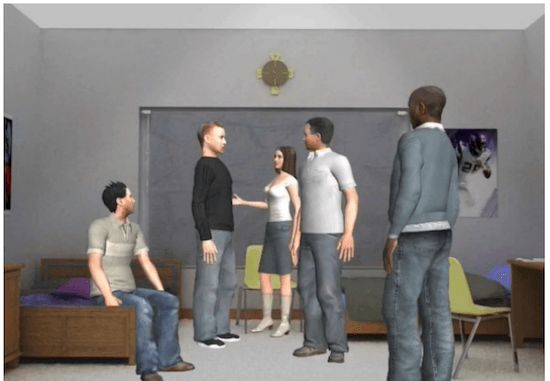 Screenshot from demonstration video for Agent of Change. 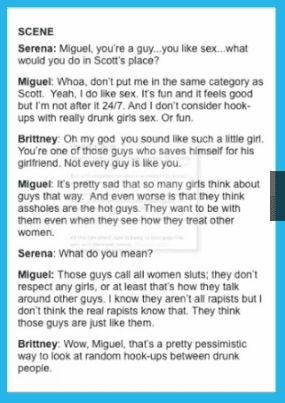 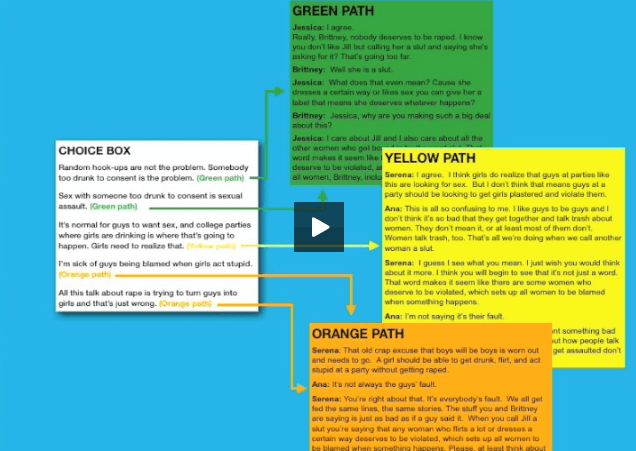 Demonstration video explaining how student responses are judged while playing the game. Note that in this instance, the answer “I’m sick of guys being blamed when girls act stupid” sends a student on the “orange path,” where non-politically correct opinions draw fire from a game character.

The usage of Agent of Change isn’t new. Since 2013, about two dozen other universities, including Princeton and Northwestern, have also used Agent of Change to get students (about 20,000 of them so far) to become characters in stories that make decisions. (PJ Media is following up with each institution to compare their utilization of the game with CSUN’s significant decision to mandate the software for class registration.)

The push to offer any such material is due to the federal Violence Against Women Act reauthorization of 2013. (The original 1994 bill was drafted in part by then-Senator Joe Biden.) The 2013 reauthorization included the Campus Sexual Violence Elimination Act provision, which requires that universities offer training to combat sexual violence.

The software is produced by Carol Mosely and Jeffrey Bucholtz of We End Violence. Bucholtz has previously produced a video titled A Way From Violence, which — according to the video’s description — was shaped heavily by his political leanings:

Centered on an educational performance by Jeffrey Bucholtz, this film enhances our cultural understanding about the connections between different forms of oppression, and how those oppressions facilitate sexual violence.

The concept that various “oppressions,” and not individual decisions to engage in criminal activity, are the root cause of sexual violence is certainly a political viewpoint, one which now must be regurgitated by the entire CSUN undergraduate community.

Interestingly, Agent of Change also claims that “a team from the Department of Defense reviewing sexual assault prevention programs has evaluated Agent of Change and classified it as highly recommended.” Indeed, several Air Force bases have been utilizing Agent of Change.

The following questions are from CSUN’s Agent of Change FAQ:

What is Agent of Change?

Agent of Change is an interactive, online sexual violence prevention training tool that utilizes popular and evidence-informed strategies from the field of violence prevention: myth acceptance, norms challenging, motivational interviewing, feminist theory, social norms theory, and bystander intervention.  Addressing complex issues of sexual assault, stalking, abusive relationships, and sexual harassment, Agent of Change places students in simulated situations where they are challenged to think about how these problems affect their daily lives and how they can act to change them.

Why do I need to complete Agent of Change, and is it mandatory?

Due to the importance of this issue and pursuant to mandates from the California State University Chancellor’s Office and federal and state law, sexual violence prevention and awareness training is required of all students at California State University Northridge (CSUN). All CSUN undergraduate students must complete Agent of Change by April 17, 2015 to avoid a registration hold for Fall Semester 2015.

I already took a sexual assault awareness program and/or the alcohol training program. Do I need to do this again?

Yes, all CSUN undergraduate students are required to complete the Agent of Change training.

I am taking online courses only. Do I need to complete Agent of Change?

Yes, all CSUN undergraduate students are required to take the Agent of Change training, regardless of whether they are taking courses on campus or online.

I am taking Continuing Education courses only. Do I need to complete Agent of Change?

Yes, all CSUN undergraduate students, whether they are taking open university, continuing education, or courses leading to baccalaureate, master’s or doctoral degrees are required to take the Agent of Change training.

PJTV’s Scott Ott contacted Carol Mosely by telephone Thursday evening. Mosely says she has been working in the field of sexual assault prevention for years, but was slow to accept the idea of a computer program to do what she has been doing face to face with groups of college students.

It’s a brave new world out there. Lots of colleges are requiring these kinds of programs and there’s been some backlash … It’s required at some campuses, not all. That kind of requirement is not popular with every student.

Mosely was quick to point out that an hour-long interactive game is just a first step:

Nobody would say that a 50-minute online program is a way to end sexual violence. It’s an introduction. Students have an opportunity to have discussions.

Mosely seemed convinced that the root of the problem is students who don’t realize that it’s inappropriate, for example, to have sex with a thoroughly inebriated fellow student who’s unable to give “positive consent,” and they think everybody does it. The program trains students to speak up and let potential rapists know that what they’re contemplating is, to quote Mosely, “messed up.”

Mosely did indicate that schools mandate the program because voluntary attendance would be low:

Most people aren’t going to volunteer to go talk about sexual violence. There’s a lot more things to do in life.

Asked if she had data about the effectiveness of the program in reducing the incidence of rape, assault and other “power-based violations,” Mosely paused:

I would say we’re still at a pretty primitive stage of trying to figure that out. We’ve hooked up with a guy who is a long-term researcher in this field. Everybody is trying to figure it out.

When asked if Agent of Change dealt with the ethics of binge drinking, the morality of casual sex, or the propriety of being alone while intoxicated with a potential sexual assaulter, Mosely responded: “No.” In her words, Agent of Change doesn’t get into any of that because “[Mosely doesn’t] believe that is the problem.”

She added that she had been drunk, years ago, but that she didn’t assault anyone:

I think it’s a problem with confusing correlation with causation. Alcohol is present for many, many, many [sic] of these assaults … many of these assaults. [But] that puts the focus on the victim of the crime. Usually they’re so drunk, they cannot fight back.

She said in many cases, the male has been drinking but is not drunk, and actually plans to rape or sexually assault the female.

It’s premeditated. Maybe not by a lot, but by a few minutes. It’s about power.

Asked if she really believes that men think that way, Mosely said:

But she’s convinced that the perpetrators are acting in conformity to what they think is a societal norm, therefore, education is the solution.

Although she rejects the suggestion that morality is a key factor — both in binge drinking and casual sex — still she uses moral language to summarize what her course teaches, and frames the fundamental problem in terms of knowledge rather than a deep-seated flaw in human nature that knowledge cannot cure:

What we’re talking about is basic decency. And the misunderstanding when it comes to gender and sex and drinking … It’s guys, mostly, sometimes women, who think this is normal. This is what college is about.

According to two articles published on the Sundial, CSUN’s student newspaper, Agent of Change is not going over well with some members of the student body:

During the question and answer section of the lecture, Journalism student Frankie Benkovic asked Hernandez about the connection between Project D.A.T.E. and the recent “Agent of Change” online education course rolled out to all CSUN students.

When pressed for his opinion about “Agent of Change” by Assistant Director of Student Involvement Vicki Allen, Benkovic wasn’t sure that the program was the best way to educate students on potentially dangerous sexual assault situations.

“I’ve already received training in these types of situations before (taking “Agent of Change,”) said Benkovic, “but my friends said that they didn’t think the scenarios were serious enough, especially with the Sims-type characters. My friends didn’t feel connected to it.”

Allen thanked Benkovic for his candid critique of the new education program.

From a second Sundial article:

Theatre student Brandon Alvarez is more ahead of the game. He’s finished the course, but isn’t sure that the video game format is the best way to get real responses.

“I don’t know if people will really be truthful,” said Alvarez. “Some of the scenarios are pretty obvious about the answers that they want you to choose.”

The “Agent of Change” training tool was created by We End Violence, an organization that defines itself as a “social business.” On their website, We End Violence makes this distinction because it means that the company “does charge for its services and does seek to make a profit, however, it does so “in order to reinvest those profits into the business, allowing (them) to provide even more services.”

We End Violence is the collaboration of two former UC Santa Barbara educators, Jeffrey S. Bucholtz and Carol Mosely. Both worked on programs that addressed the elimination of violence against women.

Bucholtz and Mosely formed We End Violence to offer educational programs and materials to businesses and universities that were looking for a practical team to provide support for any violence prevention campaign.

Susan Hua, CSUN Title IX Coordinator, was not part of the work group that selected “Agent of Change,” but she outlined the process that brought the online course to the student community for the majority of the CSUN campuses.

Hua mentioned the criteria for choosing the educational program included taking into consideration the comprehensive coverage of topics such as sexual harassment, sexual discrimination and sexual violence; allowing options for customization; a learning appeal to the target audience, degree of engagement, and inclusivity; and content that was evidence-based and data-driven.

“The work group regarded “Agent of Change” as having addressed the (necessary) criteria and it is also endorsed by the White House Task Force on Campus Sexual Assault,” said Hua.

“Students only have to complete the entire educational course once,” said Hua. “However, all students will receive periodic “refresher”-type educational programs, at least annually, to ensure that they are aware of how to handle and report incidents of sexual harassment and sexual violence.”