Tort Reform Can Lower Costs Without Harming Health Care. So Why Isn't It in Obama's Plan?

Many experts have pointed to tort reform as a key element of any effort to hold down the costs of health care:

As the American College of Obstetricians and Gynecologists noted in a study in 2003, cerebral palsy could not be blamed on delivery trouble in the “vast majority” of cases.

The effect is not restricted to insurance costs. Lawsuits cause doctors to run additional and possibly unessential procedures:

The New York Times has reported that as a result of such lawsuits, “doctors have responded by changing the way they deliver babies, often seeing a relatively minor anomaly on a fetal heart monitor as justification for an immediate cesarean.”

Though an obvious contributor to health care problems, tort reform is not part of any of the Democratic Party bills for revising the United States health care system. Back in June, President Barack Obama said to the American Medical Association:

Now, I recognize that it will be hard to make some of these changes if doctors feel like they’re constantly looking over their shoulders for fear of lawsuits. I recognize that. (Applause.) Don’t get too excited yet. Now, I understand some doctors may feel the need to order more tests and treatments to avoid being legally vulnerable. That’s a real issue. (Applause.) Now, just hold on to your horses here, guys. (Laughter.) I want to be honest with you. I’m not advocating caps on malpractice awards — (boos from some in audience) — (laughter) — which I personally believe can be unfair to people who’ve been wrongfully harmed.

Fairness may very well be the president’s reason for not backing tort reform, but other elements of the plan seem unfair, such as the prospect of rationing health care, and that hasn’t stopped him. It seems that the president should be desperate to find some savings in his health care plan, as the Congressional Budget Office has said almost every Democratic Party idea increases rather than decreases spending. Tort reform may very well be the ticket to heath care savings that President Obama is looking for:

The accounting firm Pricewaterhouse Coopers says about 10 percent of the cost of medical service is attributable to medical malpractice lawsuits. Roughly 2 percent is caused by direct costs of the lawsuits; an additional 5 percent to 9 percent is due to expenses run up by defensive medicine.

So why the lack of tort reform in ObamaCare? Start with the campaign dollars the president received from the legal industry:

The latest Federal Election Commission data (released 7/13/09) reports that President Obama received the most cash of any candidate from lawyers or law firms — more than $43 million. He received almost three times more from them than Hillary Clinton ($15 million) and more than four times the amount John McCain received ($9.9 million). President Obama received almost 50 percent of all dollars from the legal industry, and two-thirds of all legal industry dollars went to Democrats Obama and Clinton. 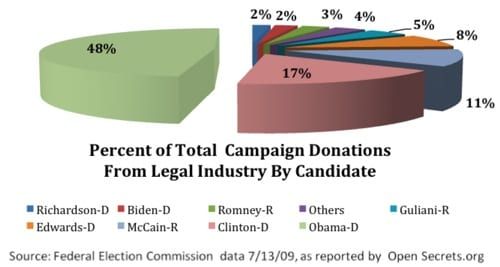 So which is it — fairness or campaign dollars? It’s difficult to present any logical reason Obama would not include tort reform in his health care planning, yet it is quite easy to fathom $43,071,129 financial reasons.

The Democratic Party’s attack on the insurance industry is taking the public’s eye off a larger culprit — the party and the president’s relationship with the legal profession.

Sammy Benoit is the editor of the political blog The Lid.
Read more by Sammy Benoit