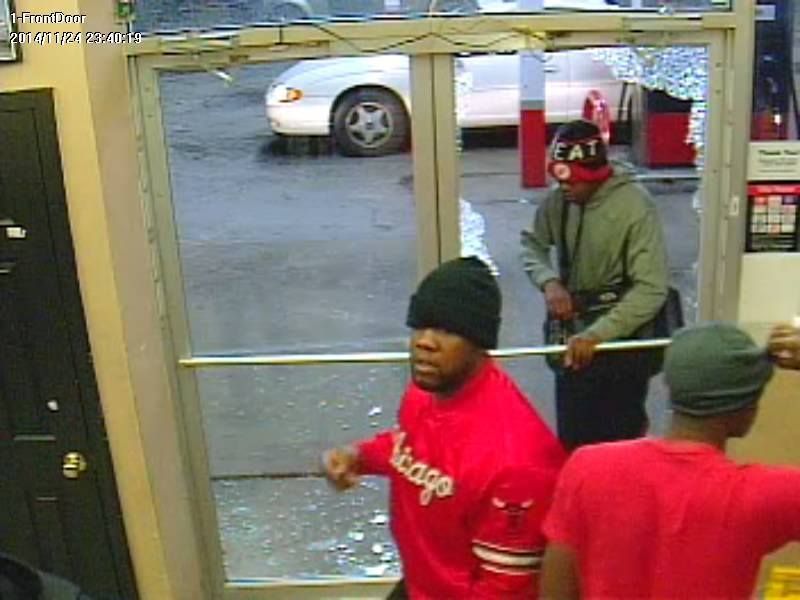 The Ferguson, Mo., area may have to relive the nightmare that began when Michael Brown decided to resist arrest and the hammer on the service weapon of police officer Darren Wilson fell, unleashing weeks of violence that destroyed more than two dozen buildings and impacted countless lives.

As the cleanup in terms of property damage and criminal investigations continues, the NAACP is petitioning for a new grand jury investigation.

But while the drama between legal minds plays out, St. Louis County, Mo., police officers enlisted the aid of the department’s Facebook page Jan. 5 as they launched a manhunt for “dozens of people” who looted a Phillips 66 gas station-convenience store in Dellwood, Mo.

A county police department post said 28 people were caught on camera entering the store during the “night of unrest in Ferguson” Nov. 24, following the grand jury decision that absolved Officer Wilson of all criminal charges in the shooting death of Michael Brown.

Detectives watched on video as looters shattered the front door to get into the store. Once that happened, more than two dozen people streamed into the store and ransacked it.

The whole thing was caught by store surveillance cameras.

The video that St. Louis County Police have released shows a woman trying to get into the store, but the doors are locked. A man walks up, and at first fails to break the glass doors, but returns, breaks the glass, unlocks the door and leaves it open for those who will follow.

The nine-minute video and 28 still photos released by the St. Louis County Police sparked angry posts from people who are following the department’s Facebook page.

“The best way to honor the dead is to live your life as they lived theirs. The Michael Brown legacy lives on,” wrote one follower.

“I am absolutely disgusted at the racist comments and pure ignorance being spewed. Who are you people? Monkeys? Animals?? They all look alike? The people pictured above should be caught and face trial for any involvement they may have in this,” wrote another.

And even one of the vehicles seen in the video came in for criticism from another Facebook page follower: “It’s the Monte Carlo’s fault for being white.”

Eight businesses in Dellwood were destroyed by arsonists and looters that night and in the days that followed. Insurance adjusters and local officials put the damage estimate at approximately $1.6 million, the St. Louis Business Journal reported.

The wrath of looters was far worse in Ferguson, the epicenter of the post-grand jury outrage. At least 17 buildings were damaged so severely they were declared “unsafe” by local officials.

The damage estimate from the riots was estimated to be $3 million in early December.

And now the NAACP wants the Ferguson area to go through it all again.

The NAACP Legal Defense and Educational Fund (LDF) submitted a letter to Judge Maura McShane, the presiding judge of the 21st Judicial Circuit in Missouri, on Jan. 5 requesting that the court conduct “an appropriate and thorough investigation” of the grand jury proceedings that cleared Wilson.

NAACP officials said the transcripts of the grand jury proceedings reveal “questionable prosecutorial tactics” that they believe compromised the integrity of the proceedings.

“Our review of these proceedings has raised grave legal concerns, including knowing presentation of false witness testimony, erroneous instructions on the law, and preferential treatment of Mr. Wilson by the St. Louis County Prosecuting Attorney’s Office,” said Sherrilyn Ifill, the NAACP LDF president.

Prosecuting attorney Robert McCulloch has admitted that he and his assistant prosecutors presented witness testimony to the grand jury that they knew to be false.

McCulloch told the host of a radio show on KTRS-AM that some witnesses “were clearly not telling the truth. No question about it.”

“I thought it was much more important that anybody and everybody was heard,” McCulloch added.

McCulloch also admitted during the interview that a female witness “who clearly was not at the scene (of Michael Brown’s shooting) clearly recounted a story right out of the newspaper.”

Although he didn’t name her on the show, he did refer to her as Witness 40. Published reports that followed have identified her as Sandra McElroy, whose version of Michael Brown’s death closely matched Officer Wilson’s story.

But a report in The Smoking Gun raised questions about whether McElroy was at the scene, and pointed out that she had tried to raise money for Wilson and has been diagnosed as being bipolar.

“These and other issues raise questions about the integrity of the process and the lawfulness of the prosecutors’ conduct. This process sets a bad precedent for our judicial system and diminishes the high standard that stewards of the law are supposed to uphold,” wrote Ifill.

However, Ric Simmons, a law professor at Ohio State University, told the Associated Press McCulloch’s decision to allow testimony the prosecutor knew to be false might have been part of a strategy to remain neutral.

“I think charitably their reason for bringing in all the evidence was so they could say, ‘Look, we showed the grand jury everything, and let them make their own decision,'” Simmons told the AP.

But, the NAACP LDF argued in its letter to Judge McShane that an investigation of the grand jury proceedings and convening a new grand jury or possibly appointing a special prosecutor are needed to “restore confidence” in the St. Louis County judicial system.

The NAACP is not alone in its quest for an investigation of the Michael Brown grand jury.

One of the grand jury members, known to the public only as “Grand Juror Doe,” has filed suit against McCulloch in an attempt to force the prosecutor to answer more questions about the investigation.

And, a group of attorneys and citizens in St. Louis County have filed an 11-page ethics bar complaint against McCulloch with the Office of the Chief Disciplinary Counsel in Jefferson City, Mo.

It included more than 15 allegations that McCulloch and his assistants violated Rules of Professional Conduct in the presentation of their case to the grand jury.

Others in Ferguson are simply worried about clearing the rubble left by rampage and reconstructing what was destroyed.

Small businesses located in Ferguson, Dellwood and Jennings that have been destroyed, damaged or burglarized since August 2014 will be able to apply for a grant to pay for business expenses including construction, rent, utilities, payroll and inventory.

But Kander admitted even that may not be enough.

“When I talked to small business owners in Ferguson, Dellwood and the surrounding area, many of them told me they didn’t know how they were going to re-open their businesses,” Kander said.

“They have poured their heart, and their life savings, into their businesses, and many can’t afford to take on additional debt to re-open or remain open, even with help from no-interest loans.”