In a letter to the party’s LGBT Caucus — the acronym stands for Lesbian/ Gay/ Bisexual/Transgender — Obama said the group “will be crucial to bringing our Party together and sweeping us to victory on November 4th.”

The letter was distributed at today’s meeting of the LGBT Caucus at the Denver Convention Center.

“Congratulations on being part of the largest LGBT Caucus delegation in Democratic National Convention history,” Obama wrote. “I look forward to seeing the LGBT community turn out in record numbers to help create the changes we seek.”

Kennedy is a “superstar” for the recovery community, said Tonya Wheeler, president of Denver-based Advocates for Recovery, noting the congressman’s sponsorship of bill to compel insurance companies to cover treatment for mental health and substance abuse.

“We have a Recovery Wellness Room in the Convention Center that is available to people who are in recovery from substance abuse and mental health issues,” said Wheeler, who is helping coordinate the effort. “We have 12-step meetings inside the room, as well as some mental health support meetings. We’re just a safe-harbor room for people who are hear at the convention who might need a safe place to go.”

The 14th Street plaza in front of the convention center has become a bazaar of street vendors peddling Obama merchandise, and also a favorite venue for groups promoting various causes.

People for the Ethical Treatment for Animals distributed flyers urging delegates to “Stop Global Warming: Tax Meat.” A ghoulishly costumed contingent promoted Trick or Vote. A bullhorn-wielding Catholic priest carried a banner declaring, “A Vote for Obama Is a Vote for Dead Children.” 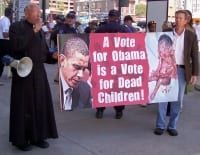 Robert Stacy McCain is co-author (with Lynn Vincent) of Donkey Cons: Sex, Crime, and Corruption in the Democratic Party . A frequent contributor to the American Spectator, he blogs at The Other McCain.
Read more by Robert Stacy McCain