Ahmed Mohamed, 14, a freshman at MacArthur High School in Irving, Texas, had a mind for gadgetry and a great idea: he would build his own working clock and take it to school on Monday to show an engineering teacher. “It was the first time,” he said, “I brought an invention to school to show a teacher.” But everything went terribly, terribly wrong: Islamophobic teachers took his innocuous clock for a bomb and went so far as to have him arrested. All is well now, however, as the civil rights group CAIR and Barack Obama have stepped in, Ahmed’s persecutors have egg on their racist faces, and Ahmed has been invited to the White House.

That’s the narrative that was everywhere Wednesday (Vox’s headline was typical of the spin: “Muslim ninth grader arrested for bringing an electronics project to school”), but as with so many such stories, it is full of holes.

His clock, a busy gadget of circuits and wires without either a conventional clock face or a digital display, looked more like a bomb than like a clock. Irving police said that Ahmed carried his homemade clock to school in a briefcase; once there, he plugged it in during English class, and it began making noise.

If he took it in to school to show it to an engineering teacher, why did he plug it in during English class? What kind of clock makes noise, other than ticking? 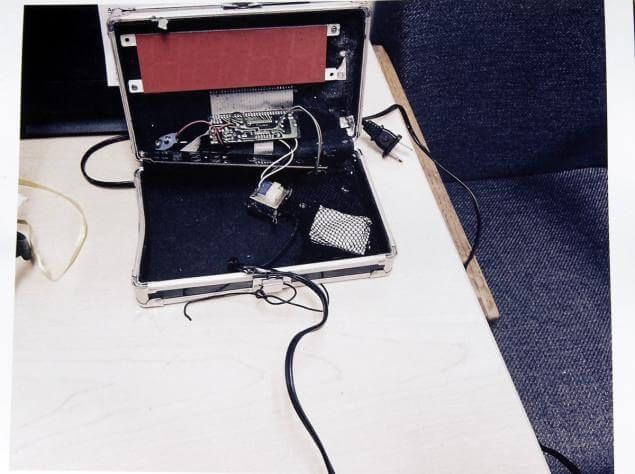 The principal, the school resource officer, and police questioned him, according to WFAA:

[O]fficers said Ahmed was being “passive aggressive” in his answers to their questions, and didn’t have a “reasonable answer” as to what he was doing with the case. Investigators said the student told them that it was just a clock that he was messing around with.

We attempted to question the juvenile about what it was and he would simply only say it was a clock. He didn’t offer any explanation as to what it was for, why he created this device, why he brought it to school.

Why this reticence? Why didn’t Ahmed tell McLellan what he so readily told the international media: that he loved building things and had brought the clock to school to show to an engineering teacher?

In any case, he didn’t. After he was arrested (and released without charge), the Islamic victimhood machine kicked into high gear. Ahmed’s father, Mohamed Elhassan Mohamed, lamented:

He just wants to invent good things for mankind. But because his name is Mohamed and because of Sept. 11, I think my son got mistreated.

This all raises a red flag for us: how Irving’s government entities are operating in the current climate.

Barack Obama himself got into the act, tweeting to Ahmed:

Cool clock, Ahmed. Want to bring it to the White House? We should inspire more kids like you to like science. It’s what makes America great.

Clearly Ahmed Mohamed is the victim of the hour, and the mainstream media will be celebrating him, and lamenting the alleged plight of Muslims in America, for a considerable time to come.

But what, really, did MacArthur High School officials and the Irving Police do wrong?

All over the country, school officials are on constant high alert for weapons — a high alert that has more than once spilled over into outright hysteria, with students being suspended for drawing guns, pointing fingers at people and saying “Bang,” etc.

Check the record. The alert has been universal. It doesn’t just single out Muslim students.

The key question here is whether Ahmed Mohamed would have been arrested if he had been a non-Muslim student and had brought the same contraption to school. Without any doubt, yes, he would have been.

However, CAIR and Obama are both avid to reinforce the narrative that Muslims are innocent victims of unjust suspicion. CAIR wants and needs “hate crimes” against Muslims, because they are the currency they use to buy power and influence in our victimhood-oriented society, and to deflect attention away from jihad terror and onto Muslims as putative victims.

CAIR (itself designated a terror organization by the United Arab Emirates) and other Muslims have on many occasions not hesitated to stoop even to fabricating “hate crimes,” including attacks on mosques. Hate crimes are big business for the supposed victims.

The upshot of this ridiculous brouhaha over Ahmed Mohamed and his clock will be that Muslim students will now be exempted from scrutiny for bringing suspicious objects to school: to subject them to such scrutiny would be “Islamophobic.” Will some enterprising young jihadi take advantage of this favorable new situation, and make a clock that really is a bomb? If that ever happens, school officials who remember young Ahmed Mohamed won’t dare stand in the way of the carnage the young jihadi wants to bring about. To do so would be “racist.”

Robert Spencer is the director of Jihad Watch and a Shillman Fellow at the David Horowitz Freedom Center. He is author of 22 books including many bestsellers, such as The Politically Incorrect Guide to Islam (and the Crusades), The Truth About Muhammad and The History of Jihad. His latest book is Did Muhammad Exist?: An Inquiry into Islam's Obscure Origins―Revised and Expanded Edition. Follow him on Twitter here. Like him on Facebook here.
Read more by Robert Spencer