Mumia Abu-Jamal, Damien Echols, and the Cult of the Murder Groupie 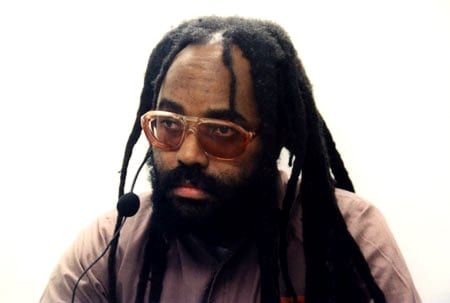 The rally will demand freedom for a “political prisoner” who isn’t innocent. In fact, only the most dishonest supporters have ever claimed he didn’t execute police officer Daniel Faulkner — something even the killer himself has never claimed in court.

On December 9th, 1981, Faulkner pulled over Abu-Jamal’s brother William Cook for a routine traffic stop. William assaulted Faulkner. As the officer attempted to arrest Cook, Abu-Jamal charged the pair and a firefight ensued. Shots hit both Faulkner and Abu-Jamal.

Investigators found the .38 used to shoot Faulkner next to Abu-Jamal (who also wore a shoulder holster designed to fit the gun). Ballistic analysis determined the weapon responsible for Faulkner’s death. Several eyewitnesses testified against Abu-Jamal, and two hospital workers who treated him testified that Jamal had confessed in the hospital with the words “I shot the motherf***er and I hope the motherf***er dies.”

William never testified to his brother’s innocence. And Abu-Jamal never testified in his own defense. Further, William has even told reporters he wants nothing to do with the Mumia circus. Very telling.

That the two people Mumia defenders would trust the most have refused to testify should take the wind out of the sails of any movement to free this man, regardless of feelings on the justice of the death penalty. That it does not proves the “Free Mumia” movement is not about justice or truth. It really isn’t even about politics even though the “activists” all tend to be radical leftists. This is about fandom: armchair revolutionaries and “class warriors” lionizing a man who did what they all dream of doing. Mumia Abu-Jamal lived the college Marxist fantasy of “fighting the man” to the death and he is now a rock star for anti-American movements. Like all rock stars his most devoted followers are his groupies.

Murderers, more than any other class of criminal, gather fans from among the morally bankrupt, misanthropic, and too often angry sub-cultures our collapsing culture produces. One sees this in the college radical’s love of Che Guevara, a racist serial killer who was disdainful of blacks and loved killing the defenseless. That’s not political spin, it’s his own words that his fans have read for themselves. Che fans know these things to be true of him, and still love him. Why? Because they admire his hatred and violence. Like Abu-Jamal, Che lived the dream of every angry, young rich kid who fancies himself a Marxist.

Nothing illustrates the murder fandom phenomenon better than Peter Jackson’s “bromance” with Damien Echols of West Memphis Three fame. The Lord of the Rings and King Kong director funded the successful bid to get the three accused child killers released. He made a documentary about the case with Echols as a producer. Jackson and his new pal even got matching tattoos.

I doubt this Echols-produced documentary will point out that prior to the murders Echols tortured animals to death, tried to gouge out the eyes of a man dating his ex, and was institutionalized three times. In fact, Echols supporters would have been better off arguing that Echols was insane because his defense lawyers released his medical records which show that he was (and perhaps still is) a delusional, violent psychotic who believed he was evolving into a super being and, with the help of other such beings, was being led to another world. These documents also show that he was severely abused, had a chronic drug problem, was a blood fetishist, and was often suicidal.

These are records entered by his defense team, but have you ever heard supporters like Jackson or Johnny Depp make reference to them? Have you heard of these West Memphis Three fans fawning over Echols’ two alleged accomplices, Jason Baldwin and Jessie Misskelley? Neither of them have been made producers of documentaries or have matching tattoos with celebrities, I would venture.

It’s almost as if Echols has fans among people who commiserate with him and idealize him due to their own character flaws.

I once saw a blog where a woman claimed Charles Manson was a “wise shaman” and there’s a series of websites dedicated to the women in Manson’s murder cult. Oddly there are no Tex Watson fan sites out there, and Sharon Tate is not on as many t-shirts as Charles Manson.

And Daniel Faulkner will never be on as many t-shirts as Mumia Abu-Jamal.

We often argue with the Abu-Jamal or Echols supporters as if we can convince them that they’re wrong, that there is some bit of information they’re missing which keeps them from coming to the “right” conclusions. We think of Manson cult fans as too fringe to deal with seriously. But the reality is that significant parts of our culture degenerated to the point where unknown numbers of our fellow citizens prefer murderers to justice. They idolize killers and brutalize the victims and their families all in the name of no particular cause except their own admiration for evil. How else do you explain wanting a man freed from jail for a senseless murder that even his own brother won’t defend? How do you explain the hero worship of movie stars for a criminally insane killer whose delusions were described as grandiose by his doctors? These celebrities are purposefully playing into his delusions — for their own entertainment.

These people aren’t activists, they’re fans. They’re groupies for murderers who gather in together with religious fervor to devote themselves to the worst society has to offer, often because they themselves are only a few steps above their idols. The “Free Mumia” rally is just another revival tent of depravity sitting in the blood-soaked field of moral insanity modern society tills.