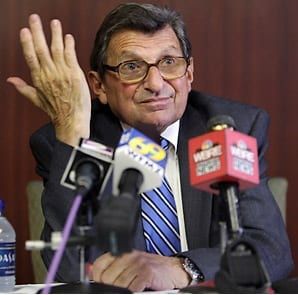 The reaction to the Penn State child rape scandal in some quarters is almost as disgusting as the alleged rapes and subsequent cover-ups themselves. Let’s put aside what were basically pro-pedophilia riots that Penn State students started when Joe Paterno was rightfully punished for his shameful inaction, or the physical attacks on those who advocate for the victims, which are obviously one of the more disturbing parts of this story.

Instead, let’s discuss the more insidious and disturbing aspect of this story which is the narrative being promoted by many (including prominent columnists) that the rioters, the people who covered up the abuse, and those who could have stopped alleged rapes but didn’t can still be considered good or decent people.

For example, Ross Douthat wrote a piece for the New York Times that compares the Penn State molestation scandal to the Catholic sex abuse scandal and gives his readers a highly “nuanced” view:

Bad and mediocre people are tempted to sin by their own habitual weaknesses. The earlier lies or thefts or adulteries make the next one that much easier to contemplate. Having already cut so many corners, the thinking goes, what’s one more here or there? Why even aspire to virtues that you probably won’t achieve, when it’s easier to remain the sinner that you already know yourself to be?

I believe that Joe Paterno is a good man.

Not content to stop with such obvious wrong-headedness, Douthat compares Paterno to Catholic officials who thought the Holy Mother Church was of greater importance than children being raped and writes:

They believed in their church. They believed in their mission. And out of the temptation that comes only to the virtuous, they somehow persuaded themselves that protecting their institution’s various good works mattered more than justice for the children they were supposed to shepherd and protect.

I suspect a similar instinct prompted the higher-ups at Penn State to basically ignore what they described as Jerry Sandusky’s “inappropriate conduct,” and persuaded Paterno that by punting the allegation to his superiors he had fulfilled his responsibility to the victimized child. He had so many important duties, after all, and so many people counting on him. And Sandusky had done so much good over the years….

I’ll leave it to Catholics to debate the propriety of comparing a college football program to Christendom’s oldest institution  and one of the the most profound influences on Western civilization. But I would like to have seen Douthat finish that thought. Sandusky did what that was good? Worked with charities?

Should working with a charity — something thousands of people do as a merely social experience — really influence whether a “good” person decides if a potential child rapist should be reported to the police?

As I’ve said over the years, the world owes Christopher Hitchens a great debt for coining a term for this sort of outrageous moral relativism and childish antinomianism: sinister piffle.

The idea that people who cover up the rapes of children — facilitating further rapes in the future by either inaction or becoming accessories — can be considered “good” people is to turn the very idea of virtue on its head. One cannot deny justice to rape victims through their actions and still be called a “good man” as Douthat calls Paterno. The myth of the Otherwise Decent Person is just that — a myth. It is a fantasy perpetuated by small people of poor character to excuse their own perfidy and moral cowardice.

Writing about crime, I come across this corrupt and wearisome idea with what is unfortunately no longer alarming regularity. Any time some criminal matter gains sufficient traction on the Internet, the family and friends of the criminal show up in the comments of crime blogs and news sites with the same tired apologia. “Sure, so and so murdered someone in a robbery but he was a good father” or “Of course pimping out your kids is wrong, but at least they were well fed” are phrases I assure you have been left on sites I run or frequent.

By Douthat’s logic, Walker’s wife is still a decent person who was just “led into temptation” by her good intentions of keeping her family together. Again, this is sinister piffle designed to relieve degenerates of the weight of their moral failings.

Though no piffle written about the Penn State scandal is quite as sinister as Megan McArdle’s argument in defense of the craven and despicable Mike McQueary. McQueary apparently told the grand jury that he witnessed Sandusky anally raping a child in the shower and ran home to his father to figure out what to do next. That story earned him well-deserved scorn so he’s changed his story, saying now he did stop the rape — just not physically. I guess he gave Sandusky a talking to. For actual decent people, that’s not quite the reaction we want to see from a person who purports to be a man.

McArdle, perhaps due to her environment, believes that most people not only wouldn’t do the right thing, but that physically intervening in a rape being committed by someone you’re friends with or related to makes you a sociopath:

McQueary grew up in State College; his family was friends with Sandusky, and of course, Sandusky had coached him.  Paterno had worked with Sandusky closely for years.  And if you think about what you would have done in a situation where you caught someone you love and respect in that position, is it really so obvious, as the chest thumping punditariat proclaims, that you would have leaped into the shower, beaten the snot out of him, and frog marched him to the police station after you rescued the kid?  Really?  You’d have done that to your father, your favorite uncle, your best friend, a beloved mentor?

Think about what that really entails: overcoming all the shock and horror, the defensive mechanisms that make you question what you’re really seeing.  The total destruction of a long relationship as soon as you name it out loud and accuse him to his face.  The actual physical logistics of grabbing a naked sixty year old man, detaching him from that child, and then pounding on him for a while as a ten year old you don’t know watches.  The fact that the minute you go to the police, you will have utterly ruined this man’s life: he will be jobless, friendless, and branded as the worst sort of pervert by everyone in the country — oh, and also, in protective custody so that the other inmates in jail don’t, like, kill him.

That’s a pretty huge emotional hurdle to leap in the ten seconds or so that McQueary had to do the right thing.  Isn’t it quite understandable that your instinct might be to get away?  To look for some way that didn’t have to involve jail?  Wouldn’t it be a huge relief to tell your superiors and let someone else take care of it?

We are evolved to live in small groups, with very deep loyalty to the other members.  In most situations, this is in fact a completely laudable sentiment.  But this is the dark side: it is very hard for us to betray the members of those small groups to which we belong, particularly if we have strong emotional bonds to that person.  There is a scientific name for people who are not bound by these sorts of ties: sociopaths.  And as I understand it, they do not, in fact, make excellent agents of justice, because they don’t care about the victims, either.

Think about what she’s arguing for a second.

You walk in on some friend or family member anally raping a child. After you physically pull the person off of his victim a fight ensues. According to McArdle, you’re a sociopath. The person who was anally raping a child is not a sociopath in her convoluted theory. In fact, McArdle, who claims people should sympathize with pedophiles because they “didn’t choose to be” perverts (which, according to criminal psychology, is only true of a subset of offenders), now claims good people don’t turn in their relatives or loved ones when they catch them raping children.

I think we’re dumbing down the definition of “good” here to a point where it simply means you’re not a troublemaker.

According to McArdle, Douthat, and untold numbers of Paterno and McQueary defenders, you can commit or support acts of depraved evil and be considered a good person if you claim some higher purpose or someone, somewhere loves you.

Good people aren’t conflicted when they see someone they know and respect, or even love, anally raping a child. They do the right thing, which is — as always — both the simplest and hardest thing to do. It is easier to find some complex and legalistic justification for your inaction and hope the whole thing goes away. But good people don’t do that. Common people might. Average or, as Douthat calls them, “mediocre” people might. But there should be a higher standard involved when judging people than qualifying their choices by claiming they’re otherwise decent people.

Otherwise decent people would know that.

The Victim Factory: Occupy Wall Street and The Left’s Culture of Crime