The keffiyeh fashion trend has finally hit America hard — and it’s no longer exclusive to Muslim students on college campuses who support Palestinian terror. Howard Dean wore a keffiyeh in early 2007. And it isn’t just the leftists. John McCain’s daughter, Megan McCain, has also been seen sporting this foolish trend during her father’s presidential campaign in 2008.

In Europe and America the keffiyeh is often worn around the neck as a scarf. It can also be draped around a person’s shoulders. Arafat, who made the keffiyeh famous, was almost always photographed with his distinctive black and white scarf. This item, as it was worn by Yasser Arafat, was typically held in place by a circular rope or agal. Unlike other Middle Eastern dress items the keffiyeh has become the trademark symbol of Yasser Arafat and the Palestinian Liberation Organization (PLO). This movement, moreover, is clear concerning its goals to annihilate Jews. The keffiyehs sold at Urban Outfitters and other popular shops are often the same color as Arafat’s. 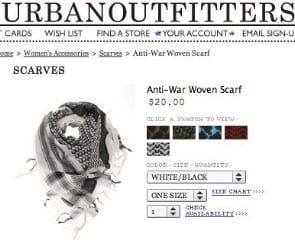 Arafat funded and fueled terrorism during his reign. He supported heinous attacks against Israelis by groups like Hamas and Islamic Jihad while simultaneously signing “peace agreements.” Interestingly enough the Oslo Accords were referred to as a scam by a so-called “moderate” Palestinian leader, Faisel al-Husseini, in an interview with the Egyptian newspaper Al-Arabi. Al-Husseini likened the work of the PLO to “a Trojan Horse.” He said, “We are lying to the Jews and cheating them.” Perhaps Urban Outfitters and other outlets should reconsider the name of their keffiyeh scarves — “Pro-Terror/Intifada Scarf” would be a more appropriate name for the garment.

Leila Khaled, a female Palestinian terrorist, wore the keffiyeh despite the fact that it is traditionally a symbol of Arab masculinity. Khaled is often romanticized in propaganda art with an AK-47 and keffiyeh. She was anything but an anti-war activist.

In August 1969, Khaled was part of a team that hijacked TWA Flight 840 on its way from Rome to Athens. Khaled and the other terrorists aimed to divert the flight to Damascus. No one was hurt and the objectives of Khaled and her accomplices were thwarted. In September 1970, Khaled and Patrick Arguello tried to hijack an El Al flight from Amsterdam to New York City. This attack was thwarted when Israeli sky marshals killed Arguello and overpowered Khaled.

Arafat and Khaled, two bloodthirsty individuals, have given meaning to the keffiyeh which is sold as an “anti-war woven scarf.” 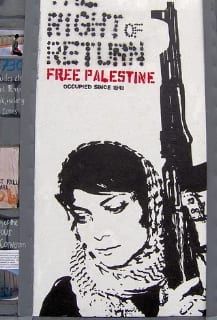 Panel from the Muslim Student Union’s May 2008 “apartheid” wall romanticizing terrorist Leila Khaled. Notice the keffiyeh around her neck. 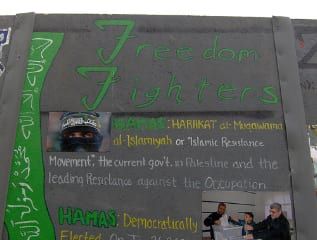 Muslim Students Association (MSA) members have often been photographed wearing keffiyehs, which represent their solidarity with Palestinian violence. Identification with terrorist movements is systemic with various MSA chapters. MSA organizations have raised funds for Hamas and Hezbollah, as well as engaged in explicitly anti-Semitic and anti-American rhetoric. 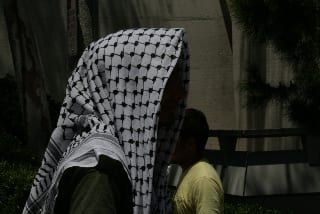 Muslim Student Union board member Jow Haider sports a keffiyeh during a lecture by the pro-terror imam Amir Abdel Malik Ali in May 2008.

My distaste for the keffiyeh fashion trend is similar to my displeasure at seeing silly young women sporting Mao handbags, which many Asians and Peruvians take offense to. I would not wear a Che Guevara shirt as I see no reason to identify with a madman who massacred innocent Cubans. Therefore, I believe the general public needs to be cognizant that the trendy scarf they feel compelled to wear is offensive to people like me who have lost loved ones because of PLO terrorism.

I am a Middle Easterner and I am not offended if someone chooses to wear traditionally Middle Eastern clothing. At Sephardi/Mizrahi hennas and weddings, the theme is typically “Middle Eastern” and I have never been ashamed of the culture that my grandparents were from. However, the keffiyeh is a different case altogether as it is a symbol of Palestinian terror and not merely a Middle Eastern garment used to protect oneself from sand or dirt. This trendy scarf has extremely negative connotations — in this case it is a garment that is associated with Arafat, who is arguably one of the most murderous individuals of our time.

While an individual has every right to wear a garment, people need to be aware that symbols — such as the swastika, Klan robe, or keffiyeh — can never be removed from their meanings. It is difficult to separate the political statement of Palestinian terror from this particular garment.