While South Bay Mobilization is not the only organization in the Bay Area that has ties to Hamas through the activities of some of its leaders and/or members, it has taken a leading role on university campuses throughout the Bay Area. Members of South Bay have had luncheons with Ismail Haniyeh, the head of Hamas, and have accepted medals from him in a highly propagandistic manner.

The Free Gaza group had been invited to the Gaza Strip by Bassem Naim, the minister of youth and sport of the genocidal terrorist group Hamas. Naim had recently been denied entry into Europe because of his terrorist affiliation. Furthermore, Hamas is responsible for the murders of hundreds of innocent civilians. The Hamas Charter, somewhat similar to the PLO Charter, includes the following passages:

On August 24, during their visit, the group met with Ismail Haniyeh, a senior leader of Hamas. What appears to be a large Hamas flag was flown on board one of the ships at its arrival. Haniyeh personally awarded medals to the Free Gaza members. 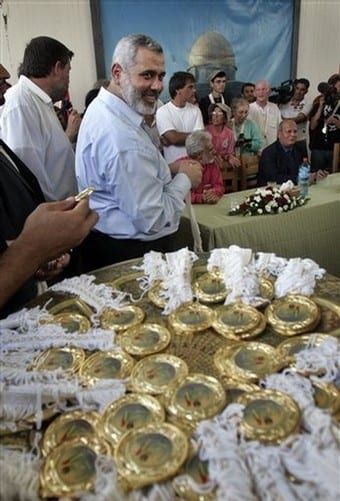 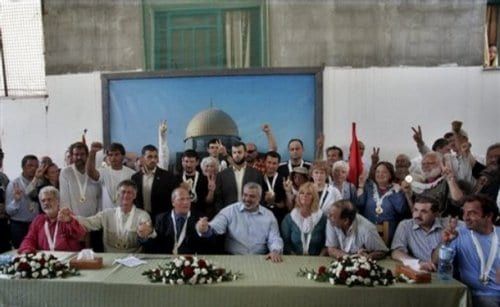 Free Gaza members with their medals pose for a photo-op with Hamas leader.

In addition to potentially violating U.S. laws which forbid contact with terrorist organizations — Hamas being among the world’s most notorious — Free Gaza members also may have violated the U.S. Neutrality Act by illegally raising money in California to bankroll two boats which they sailed into Gaza. This incident was known as the “Gaza boat incident.”

The U.S. Neutrality Act that is codified in Section 960 of Title 18 of the U.S. Code states:

Whoever, within the United States, knowingly begins or sets on foot or provides or prepares a means for or furnishes the money for, or takes part in, any military or naval expedition or enterprise to be carried on from thence against the territory or dominion of any foreign prince or state, or of any colony, district, or people with whom the United States is at peace, shall be fined under this title or imprisoned not more than three years, or both.

Considering the actions of South Bay Mobilization and the Free Gaza Movement, it is deeply troubling that university departments are collaborating with SBM to bring defrocked academics to campuses. On September 24, 2008, South Bay Mobilization co-sponsored a talk by Robert Fisk with the Department of Anthropology at San Jose State University. Efforts to persuade the faculty sponsor, Associate Professor Roberto Gonzalez, that partnering with the activist group can be damaging were unsuccessful. The event went ahead as planned and an SBM spokesman addressed the large crowd in the Engineering Auditorium for several minutes before Gonzalez introduced the speaker.

On October 15, SBM arranged a talk by disgraced fraud and celebrated anti-Semite Norman Finkelstein and anti-Zionist ideologue John Dugard. This time the event was held in Booth Auditorium in Boalt Hall at UC Berkeley and was co-sponsored by three campus groups: the Boalt Hall Committee for Human Rights, Students for Justice in Palestine, and Law Students for Justice in Palestine. Finkelstein, a supporter of Hezbollah, had been hosted at Stanford University on January 25, 2007.

South Bay Mobilization was also allowed to co-host an event with the Center for Global Law and Policy at Santa Clara University on October 16. This event also featured Norman Finkelstein and John Dugard. The faculty co-sponsor, Professor David Sloss, after a discussion with concerned colleagues, decided to add historian David Meir-Levi as a third speaker in order to make the panel more balanced. The SBM organizers, Fadi Saba and Sanjeev Mahajan, are both fervent supporters of the Free Gaza Movement. Mr. Mahajan even co-drafted a letter to Amr Moussa, the secretary-general of the League of Arab States since 2001, praising “the heroic supporters of the Free Gaza Movement.” It should be noted that Mahajan described Meir-Levi, who had previously joined the panel of an SBM-sponsored event at San Jose State University on April 29, as a “Zionist ideologue” and a functionary of the “Israel lobby.”

Universities are under an obligation to remain committed to their charters and to uphold tolerance and understanding within their communities. While it is critical that free speech be respected, including the speech of those people or groups who engage in hateful discourse, universities are not obliged to provide a podium to such entities or to partner with them in support of speakers or panels. Co-sponsoring events with organizations such as South Bay Mobilization raises serious ethical and possibly even legal questions, while compromising the standing of faculty or departments that choose to do so.

While it is unclear which, if any, federal laws have been broken by South Bay Mobilization, it is undeniable that they met with Hamas officials in a highly questionable manner and ran through blockades in order to achieve the detestable goal of standing in unity with a terrorist organization.

UC Berkeley, Santa Clara University, and other academic institutions that have co-sponsored events with SBM should take heed before agreeing to any future dealings with this group.