Islamist Campus Group Gets 'A+' in Radicalism

The Investigative Project on Terrorism (IPT), a non-profit research organization founded by Steve Emerson, published a letter on the IPT website which was written by a Muslim Students Association (MSA) member. The letter urges Muslims not to vote in elections this November. While an overwhelming number of Muslim-Americans supported Barack Obama, the MSA student suggested that both candidates are “kafir” and “poisonous.”

IPT accurately points out that these radical views are not anomalies, and are pervasive among various MSA chapters. 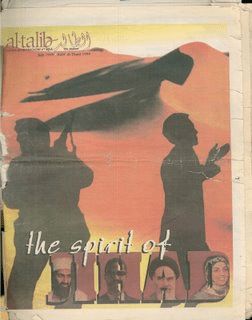 The July 1999 issue of UCLA’s MSA magazine al-Talib features the faces of Ayatollah Khomeini, Osama bin Laden, and Malcolm X. The article in the magazine about Osama expresses a hope that Muslims will defend their “brother” when someone refers to him as a terrorist.

The Muslim Students Association of the United States and Canada maintains chapters on more than 600 college campuses, 150 of which are directly affiliated with the national organization. While chapters may sometimes vary since the relationship between individual chapters and the national level is not fixed, the MSA has gained notoriety for radicalism on North American college campuses.

The MSA was initially founded by members of the Muslim Brotherhood and was named in a May 1991 Muslim Brotherhood memorandum as one of the Brotherhood’s like-minded “organizations of our friends” who shared the common goal of destroying America. These “friends” were described by the Brotherhood as groups that could help teach Muslims “that their work in America is a kind of grand jihad in eliminating and destroying the Western civilization from within and ‘sabotaging’ its miserable house by their hands … so that … God’s religion [Islam] is made victorious over all other religions.”

While it would be silly to believe that MSA students are engaging in any kind of conspiracy, Muslims typically have no alternative to the MSA when they first arrive on college campuses and become involved with this extreme organization. As an undergraduate student I recall several students who could have easily been described as moderates — and whom I was friendly with — joining the MSA during their first year. These students, who were initially amicable and reasonable, grew increasingly radical as they became more immersed in MSA activities.
It is crucial to recognize that the MSA was initially financed by Saudi Arabia. A New York Times piece says that the organization’s leaders, in return for the financing, “pushed the kingdom’s puritan, Wahhabi strain of Islam.” In the 1960s and 70s, adds the Times piece, MSA chapters “advocated theological and political positions derived from radical Islamist organizations and would brook no criticism of Saudi Arabia.”

Recent controversy surrounding the MSA shows a relationship between this student organization and the Holy Land Foundation fiasco in which money was allegedly being allocated to a Hamas front group. The MSA had apparently fundraised for the Holy Land Foundation for Relief and Development, whose assets the U.S. government seized in December 2001 because that organization was giving financial support to the terrorist group Hamas.

The MSA has also become increasingly influential. MSA has published the MSA Starter’s Guide: A Guide on How to Run a Successful MSA, which states: “It should be the long-term goal of every MSA to Islamicize the politics of their respective university. … The politicization of the MSA means to make the MSA more of a force on internal campus politics. The MSA needs to be a more ‘in-your-face’ association. … For example, the student body must be convinced that there is such a thing as a Muslim-bloc.” The MSA Starter’s Guide further advises: “Aim to rise within the ranks of the Union [student government] and to get on selected executive committees. … I cannot stress this enough, the Union has vast powers that Muslims need to control.”

Though the MSA often presents itself as a fairly innocuous religious organization catering to Muslims on campus, the behavior of student leaders and members of the MSA has been anything but innocent:

Perhaps the most notable and shocking case concerning an MSA member is that of former member Asan Akbar, an American Muslim extremist who attended the MSA-controlled student mosque at the University of California, Davis. After college, Akbar joined the U.S. Army and, in the early hours of March 23, 2003, he intentionally detonated a grenade amidst sleeping members of his 1st Brigade of the 101st Airborne Division stationed in Kuwait — killing two and wounding fifteen.
Unfortunately, the MSA has refused to condemn terrorism and radical Islam. The group decided not to participate in or endorse a crucial rally on May 14, 2005, “Free Muslims March Against Terror,” an event with the purpose to “send a message to the terrorists and extremists that their days are numbered … [and to send] a message to the people of the Middle East, the Muslim world, and all people who seek freedom, democracy, and peaceful coexistence that we support them.”

Considering their other activities, the fact that MSA chapters refused to participate in or endorse a rally denouncing radical Islam suggests that their alliances are not innocent.

Despite the disturbing behavior that Muslim Students Associations have engaged in throughout North America, they are in good standing with universities across the United States. Various MSA chapters have brought anti-Semitic, anti-American, and even homophobic speakers to campus. While the MSA has the right to exercise their First Amendment rights, it is unwarranted that such a hateful organization abuses university resources and even solicits student government funding — paid for in part by tuition dollars — to engage in their vile behavior.