Why the Muslim Beard Bodes Trouble

Consider the Muslim beard. Because Muhammad wanted his Muslims to look different from infidel Christians and Jews, he ordered them to “trim closely the moustache and grow the beard.” Accordingly, all Sunni schools of law maintain that it is forbidden, a “major sin,” for men to shave their beards — unless, of course, it is part of a stratagem against the infidel, in which case it is permissible.

Prior to Ramadan, Islamic leaders in Egypt called for a million men to grow their beards and show Egypt’s adherence to Muhammad’s commands. Popular and enthusiastic preachers such as Muhammad Hassan went as far as to pray for the day when 80 million Egyptians grew their beards — a figure that presumably includes women and children, as 80 million is the size of Egypt’s entire population.

Amr Adib, a popular talk show host on Cairo Today, mocked this call for a “million man beard” with his trademark sarcasm: “This is a great endeavor! After all, a man with a beard can never be a thug, can never rape a woman in the street, can never set a church on fire, can never fight and quarrel, can never steal, and can never be dishonest!”

He and his Egyptian viewers know quite well that it is precisely those Muslims who most closely follow the minutia of Muhammad — the Salafists — that are most prone to violence and deceit, which were also advocated by the prophet. Towards the end of the program, Adib spoke seriously, ominously, saying this issue is not about growing a beard, but rather, “once you grow your beard, you give proof of your commitment and fealty to everything in Islam.” 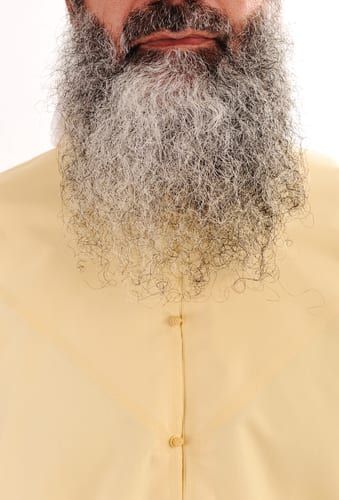 While Egyptians instinctively understand how fealty to the Muslim beard evinces fealty, or at least acceptance, to all those other things Muhammad commanded, even in fuzzy Western op-eds the connection sometimes peeks out. Consider the following excerpt from a recent New York Times piece titled “Behold the Mighty Beard, a Badge of Piety and Religious Belonging”:

[A]ll over the Muslim world, the full beard has come to connote piety and spiritual fervor. It is such a powerful cultural signifier, in fact, that it inspires non-Muslims, too. … Of course, the beard is only a sign of righteousness. It is no guarantor, as Mr. Zulfiqar [a Muslim interviewee] reminds us: “I recall one gentleman who came back from a trip to Pakistan and remarked to me, ‘I learned one thing: the longer the beard, the bigger the crook.’ His anticipation was people with big beards would be really honest, but he kept meeting people lying to him.” [emphasis mine]

The italicized portion speaks for itself. Whereas the Muslim beard represents piety, some people, mostly Westerners, are shocked to find that those who wear it are often “crooks” and “liars.” In Islam, however, outer signs of religiosity on the one hand, and corruption and deceit on the other, are compatible. After all, the same source — Muhammad, as recorded in the hadith — that tells Muslims to grow a beard also advocates deception and all sorts of other practices antithetical to Western notions of piety.

The hijab, or headscarf, which cloaks Muslim women, also on Muhammad’s command, produces the same symbiosis. Tawfik Hamid, a former aspiring jihadist and acquaintance of al-Qaeda leader Ayman Zawahiri, accurately observes that “the proliferation of the hijab is strongly correlated with increased terrorism. … Terrorism became much more frequent in such societies as Indonesia, Egypt, Algeria, and the UK after the hijab became prevalent among Muslim women living in those communities.”

Yet if such Muslims meticulously follow the minor, “outer” things of Islam simply because their prophet made a few utterances concerning them in the hadith, logically speaking, does that not indicate that they also follow, or at least accept as legitimate, the major, “inner” themes Muhammad constantly emphasized in the hadith — such as enmity for and deceit of the infidel, and, when capable, perpetual jihad?