So Washington gets fat, and it does so on money taken from the rest of the country.

Just how fat have Washington and the Beltway counties gotten? According to the latest U.S. Census data, between 2000 and 2010 the richest of the Washington, D.C., area have accrued about twice as much new wealth as those not living in or around the area.

Also, some Washington counties have gotten about twice as much new wealth as some of the other richest counties in the United States.

An April 2012 Forbes article lists the 10 richest counties in the United States — the list contains five D.C.-area counties, including the top three richest on the list.

A comparison with the other richest counties and with the rest of the United States gives a more detailed picture. I compared the differences in median income (family and household) between these 10 counties and the rest of the United States, in addition to looking at income growth over the 10-year period 2000 to 2010. (All of the data that I used come from the U.S. Census website.)

From 2000 to 2010, the richest Washington-area counties’ income (by two income measures — defined at the end of this article) grew at about twice the rate of the rest of the country. D.C.-area income also grew at almost twice the rate as the other richest counties in the country not located in the Washington area.

Here are the counties I used, taken from the Forbes list (note that I include D.C. — it makes sense to use the epicenter of the region’s wealth, although its income, by both measures, actually brings the average of the other five down):

The five counties not in the D.C. area:

After averaging the counties’ incomes in 2000 and 2010, using both measures: 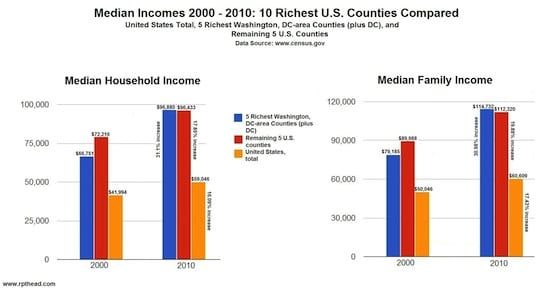 The percentage growth in median household income from 2000 to 2010:

The percentage growth in median family income from 2000 to 2010:

There are some differences between median household and median family, but those differences are not significantly higher or lower.

The graphs below show the difference in percentage change of income growth between the richest D.C.-area counties and the rest of the United States: 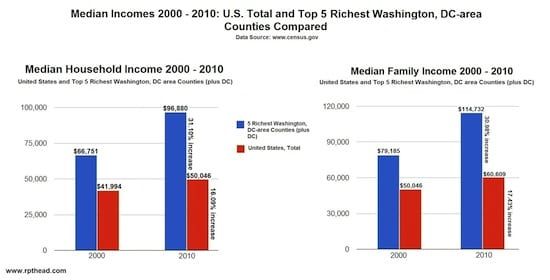 The differences in income growth, using these two measures, are clear. The D.C. area has gotten fatter, especially the richest counties.

The percentage of total federal government spending growth for 2000 to 2010 corresponds closely to the percentage growth in median incomes in the D.C. area’s richest counties compared to the rest of the United States: it also approximately doubles, from around $1.8 trillion in 2000 to around $3.5 trillion in 2010. Total federal spending is certainly not the only indicator of income growth in the Washington region, but there appears to be a relationship.

I used two different measures of income from the U.S. Census:

Median Family Income: The total income of a family, as defined by the Census: “A family consists of two or more people (one of whom is the householder) related by birth, marriage, or adoption residing in the same housing unit.” This definition is more likely to have a dual-income household.

R.P. Thead is a writer and blogger. This fall he released his first novel, The Sovereign Soil.
Read more by R. P. Thead