Few Americans can not answer this question: who is the worst domestic mass murderer in United States’ history? Due to the United States media, most are aware that Timothy McVeigh slaughtered 168 people with a bomb in 1995.

Most Americans also know the names of our three most monstrous serial killers: “The Green River Killer” Gary Ridgeway, Ted Bundy, John Wayne Gacy. The U.S. media is again responsible for the general awareness of these men; these stories deserved — and received — national attention due to our common interest in personal safety, the rule of law, and the character of our nation.

Informing the public about these four killers was — morally and professionally — the proper judgment.

For the past few weeks, a man has been on trial who, according to testimony, is likely to surpass Ridgeway as the U.S. serial killer with the highest body count, and he may surpass McVeigh as the worst mass murderer as well. Ridgeway is suspected of more than 90 murders and he was convicted of 41. This man stands trial for murdering eight — however, testimony puts the number at more than 100.

Further: the other four mentioned above primarily murdered adults. Only one murdered children. Indeed, a significant portion of the revulsion the country will forever direct towards McVeigh involves the 19 children at a daycare center who were killed by his bomb.

After being apprehended, McVeigh told investigators he did not know there was a daycare center in the building — and that if he had known, “it might have given [him] pause to switch targets.”

Even McVeigh perhaps thought the murder of children to be beyond the pale.

The man currently on trial?

To compound the enormity of the event as a news story: the man did not act alone. Several others, who are also being prosecuted, aided him in the murder of perhaps more than 100 babies.

A contender for trial of the century? Objectively, yes. Yet: here is a photo of the courtroom’s media section: 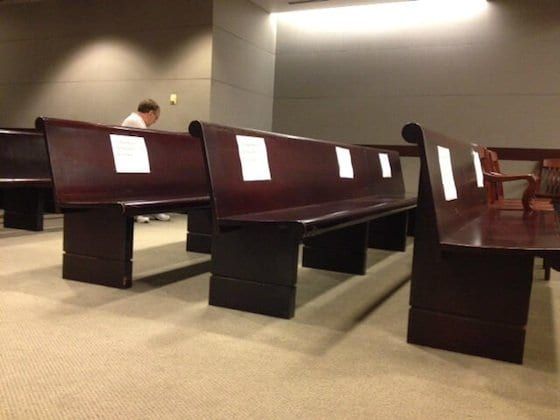 In an immoral, unprofessional, bizarre — surely, several other negative descriptors are apt — display of unity, virtually the entire U.S. media industry save for those generally referred to as “conservative outlets” have instituted a blackout of the trial.

Infanticide — the crime that gave even Timothy McVeigh pause — is a left/right issue for your employer?

The media behavior regarding the trial of monster Kermit Gosnell is a turning point: with all of conservative media’s complaints regarding the liberal bias of U.S. media, we never imagined this could happen.

We know there are journalists out there infuriated by their employer’s current behavior: The change must start with you.

We are looking for whistleblowers: if you have any information regarding why your employer is not covering the Gosnell trial, please submit it here. Your anonymity will be protected.