In indicting four members of Hizballah (who were apparently acting for Syria) for murdering former Lebanese Prime Minister Rafiq Hariri, the UN Special Tribunal for Lebanon (STL) detailed how the plot was carried out. One aspect of this story tells more about the Middle East than a library full of books on the subject.

Two of those indicted — Hussein Hassan Oneissi and Assad Hassan Sabra — had the task of covering up the crime. How to avoid the revelation that Hizballah and Syria were behind this murder and others?

Their solution was to create a phony Sunni Islamist, al-Qaeda style group they called “Victory and Jihad in Greater Syria.” The hit team recruited a 22-year-old Palestinian named Abu Adass to record a video that bore all of the hallmarks of an al-Qaeda operation: a black flag was placed in the background, with writing similar to what’s found on al-Qaeda flags.

The Adass flag reads: “There is no God but Allah and Muhammad is his messenger” (the Islamic Shahadah, or statement of faith) with “God is greatest” underneath, and the fake organization’s name under that. A bearded and turbaned Adass read from a statement claiming responsibility. The video was then sent to Al Jazeera.

Adass has never been seen again and was presumably killed by Hizballah because he knew too much. Among those swallowing this deception was the author Nicholas Blanford who, in his book Killing Mr. Lebanon, concluded that the video’s authenticity was proven since it referred to the “Land of the two mosques,” a popular al-Qaeda euphemism for Saudi Arabia.

The deception didn’t stop there. According to the STL indictment, cellphones and pre-paid cellphone cards used in the assassination and cover-up operation were bought in Tripoli, Lebanon, a Sunni- majority city and hotbed for Sunni Islamist movements. Even the Mitsubishi van used in the car bombing was purchased in Tripoli.

The STL noted, “The conspirators expected that the false trail, together with the false claim of responsibility…would cause authorities to investigate others in Tripoli, and so shield the conspirators.” Since the 2005 Cedar Revolution, other anti-Syrian Lebanese were also assassinated by fabricated groups. The “Strugglers for the Unity and Freedom of Greater Syria” suddenly appeared and claimed responsibility for a number of high-profile killings including Gebran Tueni, Samir Kassir, and MP Pierre Amine Gemayel.

Even the former head of the STL, Detlev Mehlis, was threatened by the group. Early in Hizballah’s history it used a combination of different front-group names when claiming responsibility for attacks. Even twenty years later, academics and policymakers still dispute whether Hizballah was associated with those operations, a testament to the effectiveness of that simple ploy.

No one had heard of the Hizballah front group, Islamic Jihad (not to be confused with the Palestinian group of the same name), until it claimed responsibility for bombing the Marine barracks and U.S. embassy in Beirut. Yet wasn’t U.S. government unwillingness to punish Hizballah for this attack, the single most costly terrorist assault on Americans prior to September 11, related at least in part to this plausible deniability? 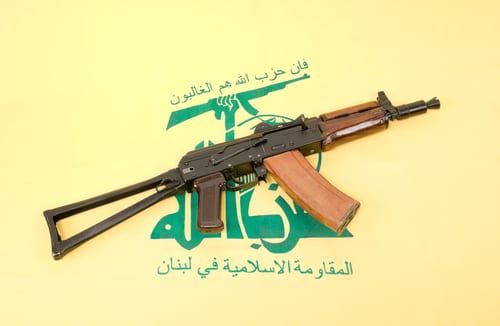 The same can be said about another Hizballah front, the Organization of the Oppressed on Earth, which kidnapped and murdered Lebanese Jews and claimed responsibility for the 1988 kidnapping and murder of U.S. Marine Lt. Colonel William Higgins. Nevertheless, the names of these two earlier front groups were steeped in the same Iranian revolutionary themes found in Hizballah’s ideology, providing easy trails back to Hizballah and its Iranian backers.

Thus, making the front group in the more recent killings a “Sunni” one added another layer of deception to conceal Hizballah’s involvement. Recently, Lebanese Hizballah along with its Iranian backers have been very active in Iraq, helping train, supply, and command groups like the Mahdi Army, Asa’ib Ahl al Huq, and countless other “special groups” in their battle against the Iraqi government and American forces.

In one instance a pro-Iranian militia exploded a bomb in a Baghdad animal market. Rear Admiral Gregory Smith told reporters, “The group’s purpose was to make it appear al-Qaeda in Iraq was responsible for the attack.” This brings to mind the mysterious al-Qaeda-style group Fatah al-Islam, which was actually a Syrian front group. It began as a Sunni Islamist offshoot of the Syrian created Palestinian group Fatah Intifadah. In 2007, Fatah al-Islam sparked a huge battle outside Tripoli in the Nahr al-Bared Palestinian refugee camp. Tripoli-based Sunni Islamists even told al Arabiya they were trained by Hizballah and Syria.

The secretive and not widely known Wissam Eid, one of the Lebanese investigators who actually came up with the idea to track the Hariri assassins’ cell phones (evidence that led to Hizballah and was extensively used in the STL indictment), was killed by a roadside bomb. No group claimed responsibility but for many in the media and policy elite, the blame fell upon Fatah al-Islam. Then there were a string of attacks against the UNIFIL peacekeeping forces in Lebanon, an organization that was supposed to keep Syrian client Hizballah from returning to the south and to help stop Syrian arms smuggling to Hizballah.

This summer, the Sunni Islamist and al-Qaida affiliated Abdullah Azzam Brigades denied any involvement in a spate of attacks against UNIFIL forces in Lebanon, including a 2007 bombing that killed three Spanish and three Colombian peacekeepers. A July attack injured three French peacekeepers; in May six Italian peacekeepers were also injured. It blamed Hizballah for the attacks:

This operation in Lebanon is a desperate attempt from the soon-to-collapse regime [referring to Syria’s Assad regime], which tasked its Shiite agent in Lebanon with carrying out, to ease pressure exerted by the international community against it.

The way the Hariri cover-up was conducted has broader implications for the Middle East and U.S. policy since it shows how Iran, Syria, and their various clients including Hizballah so successfully use front groups to escape any consequences for attacks they stage. We now know, for example, that the PLO used Black September and other front groups for massive terror attacks — including the one against the Munich Olympic Games and the assassination of two U.S. diplomats in Sudan — in the 1970s. Sponsoring states and terrorist groups have gotten away with kidnappings, assassinations, and terrorist attacks — often against Western targets — in places as far- flung as Argentina, Lebanon, and Saudi Arabia by merely doing the assaults under other names.

Phillip Smyth travels regularly to the Middle East and lived in Lebanon. He has written for The American Spectator, The Daily Caller, Haaretz, National Review Online, NOW Lebanon, the MERIA Journal, and the Counterterrorism Blog. You can follow Phillip on Twitter: @PhillipSmyth
Read more by Phillip Smyth