A picture of a young girl holding a pink AR-15 appeared in Rolling Stone last month. The girl, Morrigan Sanders (daughter of Baen author Michael Z. Williamson), was much younger when that photo was taken, but she’s still a gun nut.

The problem: Rolling Stone writer Tim Dickinson’s accompanying article is titled “The Gun Industry’s Deadly Addiction,” and he never contacted Morrigan for comment. Rolling Stone did not violate any law by using the photo — they purchased it from the photographer — but Dickinson was perhaps unaware that Morrigan is something of an Internet icon, with hundreds of photos of her and her signature pink AR all over the Internet. She is also well-informed and capable of challenging the gun-control agenda.

Now 15 years old, looking forward to a career in acting or perhaps music, Morrigan told PJ Media that she appreciated the publicity but that Dickinson wrote a terrible piece to accompany her picture:

Great picture, bad article. … It was doing what media often does, laying it all on one-sided, and not necessarily having the best writing. The writing was the largest problem for me. When I saw it, it seemed to me that it had many inaccuracies, was biased, and not supported by sources. I was more worried about the fact he only had his opinion, rather than the opposition’s opinion as well.

Her father agreed — he was not so much angry, but amused:

They made so many assumptions about young and female shooters, and implied a stereotype. Great to see liberal tolerance in action. The biggest problem is it was wrong. I would have rewritten it to be factual, informative, sourced, and non-bigoted against shooters and women.

Rolling Stone appears to have used the picture of Sanders because the argument the article makes is akin to the one used to move public opinion against the tobacco industry: namely, the industry is marketing directly to kids and women. Per Dickinson:

To goose future growth, the gun industry is aggressively marketing guns to children as young as the first-graders slaughtered in Newtown. “By the time kids are in fifth grade, or even before, they’re already being pulled away by the allure of video games, organized sports or other activities,” said Bud Pidgeon, president of the U.S. Sportsmen’s Alliance, which along with the National Rifle Association and three other prominent gun groups oversees Families Afield. In less than a decade, Families Afield has pushed more than 30 states to jettison regulations that protect kids from guns — removing age restrictions on hunting licenses or no longer requiring that children take a gun-safety course before going hunting with Dad.

Rolling Stone also noted that there are magazines dedicated to young shooters, and programs specifically for them. The obvious problem with Dickinson’s argument: children do not and cannot purchase firearms legally. Their parents must do it for them. When a child takes up shooting, typically the parent is a shooter introducing the activity to the child — no advertising can bypass the parental supervision. Matching the typical experience of most kids who shoot, Morrigan didn’t get a gun because she was “targeted” by the gun industry to adopt an “addiction.” Her father gave her one and taught her to use it:

I was four and [Williamson] gave me my first single-shot .22, I had a lot of fun shooting it. I understand how a gun works — knowing its weak points, strong points, the ways you use it helps. It has given me a respect for guns.

Her favorite weapon now is a heavy-caliber revolver, also given to her by her father:

[It is a] second model Smith & Wesson made in 1916 in .45 Long Colt, originally in .455 Webley British during World War One. I love the feel in my hands and it has a nice level of kick to it. Mine also has great action and it just had its 96-year tune-up.

Williamson points out that not all children are ready for a gun that young: indeed, he did not see the proper level of maturity in his son Eric until later, and kept guns out of his hands until later:

It’s different for every child. My son wasn’t really ready until seven.

She expressed an interest and was able, with supervision, to behave safely on the range. She treats guns and other tools with respect and doesn’t play around with them. This is also noticeable as she learns to drive. She’s cautious, thoughtful, and thinks ahead.

Rolling Stone also accused the gun industry of targeting women as well as children, yet the obvious sexist infantilization of adult women present in such a charge went unanswered in the article. Rolling Stone:

To target urban and suburban women, gunmakers have adopted a two-pronged marketing strategy. One: Feminizing the weapons by dressing them up in hot pink. Two: Marketing powerful guns to women as the only surefire protection against sexual and violent predators. Shooting Industry Magazine publishes a column called “Arms and the Woman,” which advises that “every gun store should have at least one pink gun on display.” This is a crowded field: Sig Sauer offers a ladies’ version of its conceal-carry “Mosquito” pistol with a “pink-coated polymer frame” that it calls “the ideal choice for hours of shooting fun.” In a similar vein, GunGoddess.com sells a kit to trick out an assault weapon with a pink hand guard, pistol grip and butt stock – transforming an AR-15 into something that looks like it belongs at a Hello Kitty convention.

Morrigan took particular issue with the prior passage:

[The article is] implying that women can’t decide for themselves whether or not they should own a gun, and that the industry can manipulate people to own a gun. I think he should’ve gotten the opinion of women who shoot first, instead of making a blanket statement that isn’t true. … Industries can market to the public but have no real way to force others to buy their product.

According to one of the Rolling Stone article’s sources, Josh Sugarmann of the Violence Policy Center (a leading gun control organization), the gun industry is marketing to women and children because the industry is suffering from declining demand:

For gunmakers, the political fight over assault rifles and high-capacity pistols is about more than just profits — it’s about the militarization of the marketplace and represents a desperate bid by gunmakers to prop up a decaying business. The once-dependable market for traditional hunting guns has fallen off a cliff. To adapt, the firearms industry has embraced a business strategy that requires it to place the weapons of war favored by deranged killers like Adam Lanza and Jared Loughner into the homes and holsters of as many Americans as possible. “They’re not selling your dad’s hunting rifle or shotgun,” says Josh Sugarmann, executive director of the Violence Policy Center, a top industry watchdog. “They’re selling military-bred weaponry.”

Not a word of the prior paragraph is supportable with evidence. NRA researcher Mark Overstreet tells PJ Media there are many reasons women are increasingly buying guns:

Overstreet also noted that gun sales are on the rise, and have been for several years now:

The Rolling Stone piece essentially adopts the pretense of handgun and semi-automatic rifle prohibition advocate Josh Sugarmann, that the popularity of self-defense handguns and multi-purpose rifles like the AR-15 is due to some sinister manipulation by the firearm industry that only Sugarmann understands, for the sake of something that Sugarmann believes his most likely audience is viscerally opposed to — namely, profit.

What Sugarmann and the author of the Rolling Stone piece do not understand, or at least pretend to not understand, is that supply doesn’t dictate demand, demand inspires supply. Handguns are popular because self-defense is a leading reason people acquire guns, and as the Supreme Court said in District of Columbia v. Heller, handguns are the type of firearm that Americans generally prefer for self-defense. They are widely sold in part because the number of states that allow people to carry handguns for self-defense has increased from 10 to 41 in the last quarter-century.

Those laws, of course, were not inspired by the firearm industry, but by gun owners in their respective states. Because the demand for handguns and multi-purpose semi-automatic rifles has increased, the number of manufacturers of those firearms has increased, not the other way around. Consider that in 1963, there was one AR-15 manufacturer; today there are dozens.

Background checks for firearms have topped two million in each of the last five months, a tally that is unprecedented. That severely undercuts Sugarmann’s wishful-thinking pretense that gun ownership is declining.

And the fact that the nation’s murder rate has concurrently fallen to nearly an all-time low undercuts another of Sugarmann’s pretenses, that increased gun ownership — particularly of handguns and multi-purpose semi-automatic rifles — must, by some law of nature, cause crime to rise.

Williamson and Overstreet agree that the article is just the latest shot fired in a long war. Williamson believes that after the Sandy Hook massacre, President Barack Obama sensed an opening and jumped in:

His rhetoric returned after Sandy Hook, equating the 2nd Amendment to a means of protecting ourselves against the threat of tasty deer and bunnies, and showing a willingness to stereotype and pre-judge almost half the American people (those with guns) as potential mass murderers.

So people voted with their dollars and bought more guns and accessories. This lesson will be repeated until he understands what “militia” and “shall not be infringed” mean, or until he leaves office.

Overstreet believes there is an element of sour grapes to Sugarmann’s comments:

Sugarmann is obviously upset that the policy goals that he has dedicated himself to for the last 30 years have been rejected by Congress, the states, and a majority of the American people. Whether he continues to blame this on fabricated, capitalism-based evils of one sort or another in a sour-grapes, desperate attempt to rally people on the political fringe, or because in doing so he keeps the grant money flowing in his direction, is anyone’s guess.

Morrigan Sanders would like PJ Media to mention that she is available to Rolling Stone for an interview at any time. 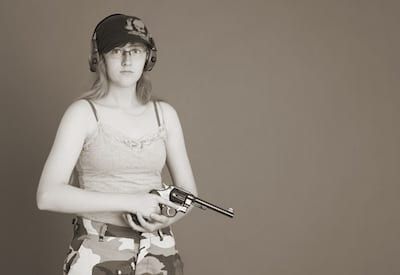 Patrick Richardson has been a journalist for almost 15 years and an inveterate geek all his life. He blogs regularly at www.otherwheregazette.com, which aims to be like another SF magazine, just not so serious.
Read more by Patrick Richardson