The Anti-Defamation League has reported on the Arab world’s reaction to Judge Richard Goldstone’s retraction of key claims of the Goldstone Report, as manifested in editorial cartoons in newspapers of various Arab countries. Google searches reveal that the report has gotten little play outside of Israeli and Jewish outlets. This is unfortunate. The material is very revealing, and not only of Arab attitudes toward Israel and Jews.

The Goldstone Report, published under UN auspices in September 2009, claimed that Israel, in its 2008-09 campaign against Hamas in Gaza, had mounted a deliberate, murderous attack on civilians. In November of that year the ADL noted that the report had become “a cause célèbre in the Arab press,” and offered a survey of laudatory cartoons from Arab papers.

One of them, for instance, appeared in Saudi Arabia’s Al-Watan and is called “Israel and the report of Goldstone.” A repulsive Israeli soldier with a Star of David on his helmet walks in a graveyard of victims, but is forced to see himself in the mirror, one of his two bloody hands holding a paper that says “Reprimand”: 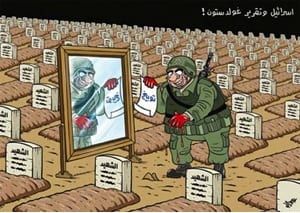 And in this one, called “The finger of guilt” and from a different Al-Watan published in Qatar, a “Jew” is trying to saw his way through a finger that says “Goldstone”: 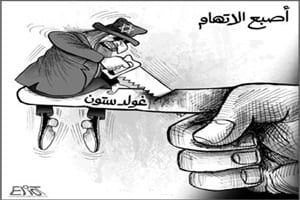 Nasty as these and the rest in this group are, the new set of cartoons reacting to Goldstone’s retraction is even worse; or as ADL director Abraham Foxman called them, “a series of hideous caricatures, many of them viciously anti-Semitic.” Ironically, they come at the time of an alleged “spring” of democracy in the Arab world; but to say that they do not reflect a democratic mindset — attending to what Goldstone wrote in his retraction, reconsidering former assumptions — is a great understatement.

This one, from Hamas’s organ Filastin in Gaza (April 5), is called “Palestinian condemnation of Goldstone’s retraction,” but it could be called “The Jewish lobby’s got his tongue”: 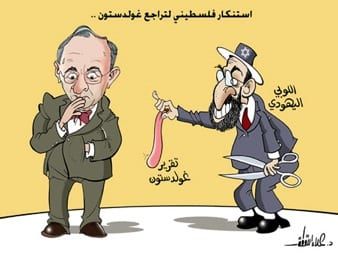 A hapless Goldstone fingers his now-empty mouth, while behind him lurks the “Jewish lobby” with scissors, having succeeded in rendering him speechless (the tongue is labeled “Goldstone Report”).

In another one, from the United Arab Emirates’ Al-Imarat Al-Yawm (April 5), Goldstone still has his tongue but is using it to erase his report: 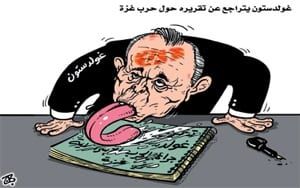 The headline is “Goldstone backs down from his report concerning the Gaza war.” The words “Goldstone Report” and “The Israeli War Crimes in Gaza” seem to be written on the report.

The theme of Goldstone as victim of the Jews is, again, emphatic in a cartoon from Qatar’s Ar-Raya (April 6). Here Goldstone is trapped in the bloody fangs of a jubilant, malevolent Jew-creature with a Star of David dangling from its ear: 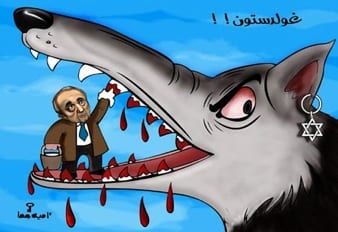 And in this one from Qatar’s Al-Watan, also simply called “Goldstone,” a bloodied Goldstone is again a victim: 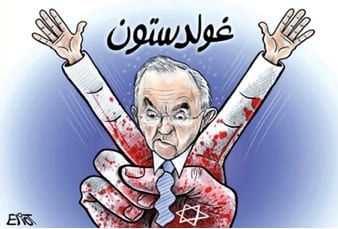 In addition to Hamas, the UAE, and Qatar, cartoons in this sample — with similar content and themes — come from Jordan (formally at peace with Israel), Saudi Arabia, and the UK’s pan-Arab Al-Hayat.

Notable here, of course, is not just the anti-Semitism, but also the cultural depth that could produce such sickening images — these being mainstream papers mostly under government control. None of this, it goes without saying, has ever mitigated the pressure on Israel to “make peace,” Secretary of State Hillary Clinton having announced just the other day a “renewed pursuit of comprehensive Arab-Israeli peace.” The Israeli army is putting the finishing touches on its new multiyear plan, which speaks of “an increasing chance for war on multiple fronts in 2011.”

Looking at these cartoons, you get an inkling as to why. Real support for Israel entails recognizing its real situation — as an island of democratic light amid great darkness.