Laughing at the Contradictions of Socialism in America

There was a time in recent American history when certain Soviet jokes didn’t work in translation — not so much because of the language differences, but because of the lack of common sociopolitical context. But that is changing. As President Obama is preparing us for a great leap towards collectivism, I find myself recollecting forgotten political jokes I shared with comrades while living in the old country under Brezhnev, Andropov, and Gorbachev. (I was too young to remember the Khrushchev times, but I still remember the Khrushchev jokes.) I also noticed that the further America “advances” back to the Soviet model, the more translatable the old Soviet jokes become. Not all Soviet advancements have metastasized here yet, but we have four more glorious years to make it happen.

One of my favorite political jokes is this:

The six dialectical contradictions of socialism in the USSR:

It reads like a poem — only instead of the rhythm of syllables and rhyming sounds, it’s the rhythm of logic and rhyming meanings. If I could replicate it, I might start a whole new genre of “contradictory six-liners.” It would be extremely difficult to keep it real and funny at the same time, but I’ll try anyway.

Dialectical contradictions are one of the pillars in Marxist philosophy, which states that contradictions eventually lead to a unity of opposites as the result of a struggle. This gave a convenient “scientific” excuse for the existence of contradictions in a socialist society, where opposites were nice and agreeable — unlike the wild and crazy opposites of capitalism that could never be reconciled. Hence the joke.

Then I moved to America, where wild and crazy opposites of capitalism were supposedly at their worst. Until recently, however, the only contradictions that struck me as irreconcilable were these:

I never thought I would see socialist contradictions in America, let alone write about them. But somehow all attempts to organize life according to “progressive” principles always result in such contradictions. And in the areas where “progressives” have assumed positions of leadership — education, news media, or the entertainment industry — contradictions become “historically inevitable.”

If one were accidentally to open his eyes and compare the “progressive” narrative with facts on the ground, one might start asking questions. Why, for instance, if the war on terror breeds more terrorists, haven’t there been attacks on the U.S. soil since 2001? Why, if George W. Bush had removed our freedom of speech, was nobody ever arrested for saying anything? And if Obama has returned us our freedoms, why was a man harassed by police in Oklahoma for having an anti-Obama sign in his car? Why would anyone who supports free speech want to silence talk radio? And why is silencing the opposition called the “Fairness Doctrine”?

As if that were not enough, the same bleeding hearts are now trying to fix this by nationalizing the banks so that they can keep issuing risky loans through community organizers. In other words, to prevent the toast from landing buttered side down, they’re planning to butter the toast on both sides and hope that it will hover in mid-air. Which also seems like a sensible alternative energy initiative.

If that doesn’t fix the problem, there’s always the last resort of a liberal: blame capitalism. It’s always a win-win. Today government regulators may be blaming capitalism for the crisis caused by their dilettantish tampering with the economy, but who do you think they will credit after market forces resuscitate the economy?

Years ago, living in America made me feel as though I had traveled in a time machine from the past. But after the recent “revolutionary” changes have turned reality on its head — which is what “revolution” literally means — I’m getting an uneasy feeling I had come from your future. 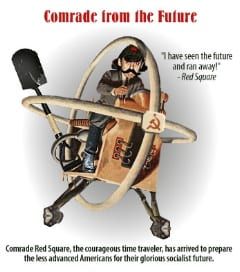 As your comrade from the future, I also feel a social obligation to help my less advanced comrades in the American community, and prepare them for the transition to the glorious world of underground literature, half-whispered jokes, and the useful habit of looking over your shoulder. Don’t become a nation of cowards — but watch who might be listening.

Let’s start with these few.

Bush and the media:

(* Some Democrat politicians have similar opinions about their redneck constituents — yet they won’t shut up about how proud they are to have their mandate.)

Liberals and the CIA: