Art from Body Parts: Not Just For Nazis Anymore

Aliza Shvarts, activist art student at Yale, claims she repeatedly inseminated herself with sperm freshly collected from campus masturbators, then induced miscarriages and stored the resulting blood with fertilized eggs in order to smear it over the surface of a large suspended cube at a student art show. Why? As a rule of thumb, if someone goes all screwy and it’s not the result of mental illness, it must be a progressive activist scoring one for The ChildrenTM and the Greater GoodTM. And that is the story of little Ms. Shvarts. 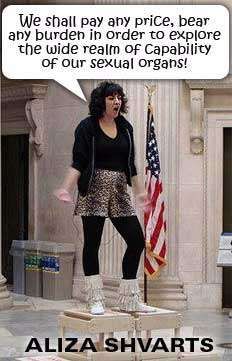 She wanted to prove that all body parts are interchangeable and “can have other purposes” — an idea she may have conceived in her class on post-modern philosophy or at the college performance of The Vagina Monologues, which is practically the same thing.

In her own words, it was meant to deconstruct the traditional “mythology that creates the sexist, racist, ableist, nationalist and homophobic perspective, distinguishing what body parts are ‘meant’ to do from their physical capability.” Translation: aborted fetuses make nice lampshades.

Indeed, Ms. Shvarts’ pursuit of unusual purposes for body parts is not new. In 1943, another uninhibited woman named Ilse Koch tried to deconstruct the “normative understanding of the relationship between art and the human body” by having a lampshade made from tattooed skins of Buchenwald prisoners.

Even in the midst of a bloody war, human lampshades were beyond normal. Since then, however, we have witnessed a relentless push for “progress” among the socially aware artists whose media include everything from lice to excrement to bodily fluids smeared over religious objects, which has notably erased “normative understandings” and redefined “the politics of convention.”

Are we in the 21st century ready to appreciate a human lampshade in the form of a suspended cube, red with blood of the unborn, lit up by videos of their potential mother inducing her own miscarriages? We won’t know until someone tests the limits of our tolerance. And that’s what Aliza Shvarts’ project was about — testing the limits. Never mind the psychobabble.

In the end, her allegorical pee stick produced a negative. The world wasn’t ready and the project was aborted. Note to “progressive” artists: the world may require some serious additional screwing before it’s ready for this sort of art.

The “artist” is now pulling the ambiguity defense: “For me, the most poignant aspect of this representation — the part most meaningful in terms of its political agenda (…) – is the impossibility of accurately identifying the resulting blood. Because the miscarriages coincide with the expected date of menstruation (the 28th day of my cycle), it remains ambiguous whether there was ever a fertilized ovum or not.”

Ambiguity was also Ilse Koch’s defense. Her guilt was never proven — neither by the Nazis in 1943, nor by the Americans after the war. The lampshade found in her house was made of goat skin. A former SS prosecutor who readily testified about the gas chambers, refused to support the lampshade story — a charge he himself had thrown out in 1943 for lack of evidence. He agreed that “The Bitch of Buchenwald” was a depraved woman — but not a sadistic maniac. The only visible result of the American investigation was Frau Koch’s embarrassing pregnancy in the middle of the long trial.

Her guilt unproven, she was released by the Americans — but arrested again by the Germans under the pressure of public opinion. Her youngest son, who was conceived during the American trial, visited her every week in jail until she hung herself in 1967.

Was Ilse Koch a monster? Without the proof, it’s in the eye of the beholder. Or, as Aliza Shvarts puts it, “this ambivalence makes obvious how the act of ascribing a word to something physical is at its heart an ideological act, an act that literally has the power to construct bodies.” We can only add that such an ideological act also has the literal power to make bodies vanish — a more likely outcome in the history of modern ideas.

The ambiguity didn’t help “The Bitch of Buchenwald,” but it’s really helping “The Bitch of Yale” who is building up the prestige, fighting critics, and enjoying a passionate support in the alternative “progressive” universe.

Case in point: an “edgy” jewelry designer from Hollywood named Onch has already made Aliza Shvarts pendant, which Guanabee.com describes as “reminiscent of roses and miscarried baby brain juice. Chains are not included, but we think this would look absolutely lovely paired with faux-Native American leather fringe boots and leopard-print culottes.” 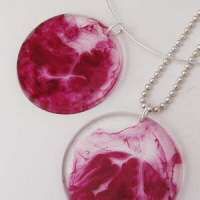 Onch is a 23 years old airhead who caters to Paris Hilton and Amy Winehouse. Says Onch: “After reading the story about artist Aliza Shvarts, i was so inspired, i made a piece named after her. Aliza is a Yale art student that has created quite a controversy in the art world! i LOVE IT! … I AM NOT supporting abortion … however i DO support having a voice and being HEARD! … xoxo Onch.”

For something as ambiguous as Shvarts’ statements, I’d say the lady doth support too much.

Suppose for a moment that the Onch pendant has magic powers to join our two universes into one. What’s next? Gucci vagina-shaped handbags with a umbilical chord strap and tiny fetuses on chains? Sex-change clinics shipping snipped male organs to gourmet restaurants in Greenwich Village for special clientele? Pottery Barn selling tattooed human lampshades?

The recent increase in square footage of finely tattooed skin is a sign of some serious progress towards that end. A growing number of people believe, just like Aliza Shvarts, that their “organs can do other things, can have other purposes.” I see new ones on the train every day.

If you believe that a scary-looking trump stamp artist can turn your skin into a masterpiece so magnificent that you’ll be proud to showcase it for the rest of your life to friends, family, and triage nurses — then why not take the next step and have your skin donated posthumously to the local arts and crafts shop? It is selfish to take art to the grave when you could share it with the community. Your organs can do other things, can have other purposes. What an idea! Gives a whole new meaning to your existence, doesn’t it? You actually get a chance to become something bigger than you could ever be in your lifetime: a lampshade.

Make yourself useful! Recycle your skin and become an “organic” picture in the guestroom, a tablecloth, or a tree ornament. It’s better than plastic and it beats Hummels.

What’s holding you? You don’t believe in traditional moral norms, do you? They’re such a conservative crock. Aliza Shvarts says we must liberate ourselves from the “normative understanding of ‘the real,'” meaning ethics. Remember the cargo-cult tribe in New Guinea who ate Michael Rockefeller and turned his skull into a lawn ornament? Like Aliza Shvarts, they believed in exploring the wide realm of capability of our organs.

Believe it or not, moral norms are real. They exist by virtue of having an absolute and objective source, purpose, and measure: human life. We have a shared “normative understanding” that human organs, including the dead ones, are the symbols of human life, which is sacred and should not be meddled with for any purpose other than the support and continuation of human life.

On the other side of this shared norm resides Aliza Shvarts, who insists that humans are disconnected from the natural function of continuation of life. As a “progressive” she probably thinks it must be the function of the government.

It might actually be true if human bodies were fashioned by an “edgy” Hollywood designer Onch. But the way we are fashioned now, we adhere to certain norms that will remain real no matter how hard the “progressives” shut their eyes on them.

Progress of a civilization — at least in my universe — is measured by the value it puts on the individual human life. But in the world of Aliza Shvarts, progress is defined as the destruction of our “normative understanding of ‘the real.'” Translation: if you want progress, quit thinking rationally. In that universe, progress is measured by how many more people have “liberated” themselves from “the bounds of normatively defined narratives” and embraced insanity.

The “liberation” cliché here stems from a wide-spread logical error suggesting that the opposite side of rationality is freedom. It’s not true. The opposite of rationality is slavery of the mind and submission to the first manipulator who claims the possession of your brain — and hence of your entire body. The opposite of “normative understanding” is not “higher knowledge” — but the loss of moral coordinates resulting in a social and personal degradation and the emergence of things like lampshades made with tattooed skin — or with blood from premeditated miscarriages.

In the alternative universe of post-modernist absurdity, our value as humans is overruled by our race, gender, sexual preference, ability, and other secondary aspects of existence, which suppresses individual qualities and assigns us to various groups and subgroups, each with a different set of second-hand ethics. We become mere functions inside a socialist hierarchy of groups, some of which are more useful to the “common good” than others. This is where the Buchenwald lampshade comes in.

Every new “progressive” generation believed they would do things better than their parents whom they despised — but ended up stepping on the same old rake. There’s a logic in every madness, and the logic of that mad universe sooner or later demands human sacrifice — be it in the form of lampshades, fetuses, gulags, suicide bombings — or New York City public schools and affirmative action.

The spelling of the name Shvarts suggests that she comes from a family of relatively recent Russian-Jewish immigrants. How much tuition fees did they pay to have their cherished child turned into an equivalent of a Papuan cargo-cult worshiper who expects to obtain rewards of the advanced civilization, not through understanding of its inner workings, but through acting out and “magical thinking”? I doubt it’s what they had expected when they moved to America.

Aliza Shvarts is not just a culprit; she is also a tragic victim — an immature girl who had been conditioned to channel into our world the poisonous alternative muck raked by the “liberal” educational establishment. The ugliness you just saw is only a splash on the quiet surface of the academic pond that is swarming with unspeakable monsters of post-modernism and neo-Marxism underneath the water lilies of science and enlightenment.

Oleg Atbashian, a writer and graphic artist from Ukraine, currently lives in New York. He is the creator of ThePeoplesCube.com, a satirical website where he writes under the name of Red Square.