If the Economy Is So Bad, Why Isn't It Worse?

The media have already declared the U.S. economy to be in recession, even if the official statistics don’t say so yet. The economy is certainly not as healthy as it was a few years ago, and may yet get much worse. But so much has gone so wrong, so quickly, that it’s not interesting to squabble over whether this is a “recession” or a “slowdown.” I wonder: why aren’t things worse?

By most measures, the U.S. economy ought to be in trouble. The goods consumers need most, food and energy, are rising rapidly in price, at the same time record declines in the values of the dollar and real estate have reduced the value of Americans’ incomes and their largest assets. Declining wealth and the rising cost of necessities should be diverting spending from other consumption goods, while at the same time more durable purchases, like homes and large motor vehicles, are enduring a historic supply glut. The chicanery in the market for housing-related financial instruments has weakened the faith of financial firms in the market, and credit for new investments is suddenly scarce. 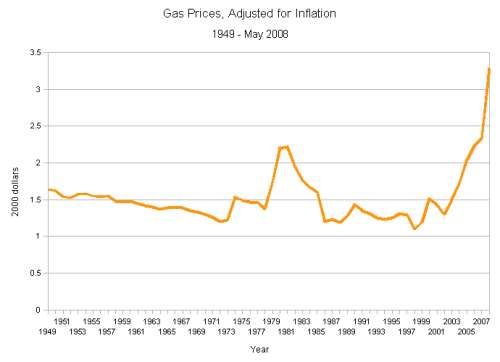 These are the ingredients for a big recession, maybe even a depression. We have never experienced gas prices or housing declines like this before. Yet the actual effect on the economy has been pretty small. The revised GDP estimate released May 29 showed a small increase over a year ago, even after accounting for inflation. It could be that the worst of the economic downturn is yet to come, but if so the stock market doesn’t think so. The S&P 500 has declined 6.3% year-to-date, not as well as could be hoped but not bad at all by historical standards. The unemployment rate in April rose to 5.0%, higher than the 4.5% rate of April 2007, but well below the 6.3% rate hit in mid-2003 or the double-digit rates in many other countries. 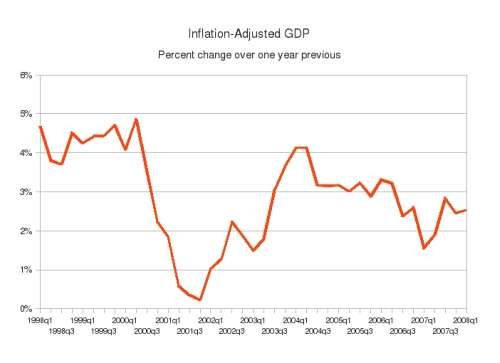 Gas prices might be in uncharted territory, but the stability of the economy is consistent with a pattern of stability that began sometime in the 1980s: economic volatility declined a lot, quickly, in almost all rich countries at the same time. The business cycle, that nauseous vortex of gold rushes and great depressions, seemed to have all but disappeared. I, and others born like me after 1980, have never known what a severe economic downturn looks like. Economists call it the “Great Moderation,” a cheeky oxymoron that sounds like a humbler Big Bang.

Many intelligent people have proposed explanations for why the economy might have become steadier. In a 2004 speech, Ben Bernanke classified all the hypotheses that had been proposed as falling into three camps. Some economists believed the moderation could be attributed to technological advances; some to improved public policy, particularly monetary policy; and some to simple good luck.

We have certainly been lucky — the Cold War did not end, as expected, in a nuclear holocaust, for example. And monetary policy is definitely much better. The Federal Reserve and other major central banks are more politically independent than ever before, and more willing to think creatively about the best ways to stabilize prices. (Full disclosure: I worked for three years as a research assistant at the Federal Reserve Bank of Boston.)

But the progress of technology is hard to overstate. Take the price of gas, for example. American gasoline consumption has risen steadily over the years, but the economy has grown even faster, and our vehicles and lifestyles — sprawl notwithstanding — have become more economical with fuel. Our real GDP per gallon of gasoline consumed is double what it was in 1958. Even though the price of gas is much higher than it was in the 1970s, we are better protected against an energy shock. 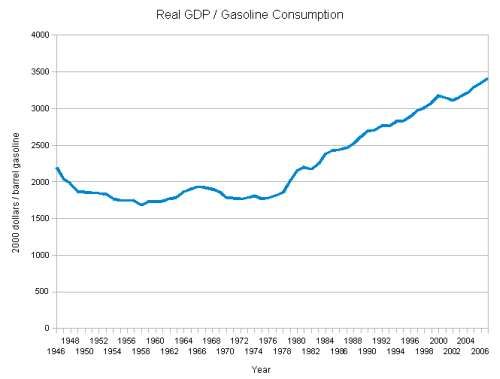 The biggest technological change in the time of the Great Moderation, however, was the widespread adoption of the personal computer by business, in particular finance. This was one of the topics I worked on with my former boss, economist J. Christina Wang, who studies the banking system. Her unpublished research suggests that the adoption of information technology permitted banks to manage risks in ways never before possible, protecting them against systemic disruptions and smoothing the growth of economic production.

Of course, the same technology played a big role in the housing market collapse. Exotic mortgages were issued, resold, and manipulated based on models of repayment risk that turned out to be woefully inadequate. Given bad assumptions and bad data, statistics can’t help; they can only make you a more esoteric type of wrong. But perhaps the same number-crunching that created our economic mess is keeping it from becoming much worse.

The truth is that economic growth is notoriously difficult to predict. Economic reporting tends to focus on the bad side of every story, even when there may be a good side as well. It wasn’t long ago that the media was decrying the lack of affordable housing in major urban areas; now the problem is not rising home values, but falling. The weak dollar has made oil expensive and consumers poorer, but in Europe they worry that the strong euro will make their products uncompetitive and their jobs at risk. People, including journalists, tend to focus on risks to our well-being much more than opportunities. The era of the Great Moderation may be coming to an end soon. But according to the numbers, it hasn’t happened just yet.