The Photograph—Updated, with an Additional Photo

I’ve just been re-introduced to my childhood self after a separation of nearly a half-century.

While I was living a busy, but tightly circumscribed, life in California going to junior high school, playing Little League baseball, and camping with the Boy Scouts, my self — or more precisely, my image — joined that of my childhood best friend and traveled the world.  It was even viewed by millions during one of the iconic events of the 20th century.

And then, as I grew into adulthood and began my own explorations into the bigger world, my image retreated to the hermetic world of an envelope in a desk drawer … only to emerge decades later, almost magically, at the very moment I lost my final connection to our shared childhood.

My mother died last July after a long and remarkable life. I gave her eulogy to a large crowd at the museum that had been my late father’s dream, and for which my mother had been both a volunteer and the largest benefactor. I turned that eulogy into this column, which was picked up by across the Web and carried by blogs around the world. I also sent copies with the announcement to my mother’s long list of friends and family.

One of those notes went to Scott Christopher, the noted photographer based in Santa Fe, New Mexico. Scott and I had been best friends as boys in Falls Church, Virginia, and my mom had been like a second mother to Scott. In the intervening decades, she had done a much better of job than me of keeping in touch with Scott — so I knew that the news would affect him deeply.

I wasn’t surprised when, a few weeks later, Scott sent a touching note offering his condolences. But I was surprised — indeed, stunned speechless — by the image on the other side of the note: It was a photograph of Scott and me, deep in conversation, sitting on a fence at what appeared to be a farm. We looked to be about age eight.

This was no weekend snapshot taken with the family Instamatic. This was a professional photograph, with beautifully saturated colors, tonal balancing only a darkroom could achieve, and a composition that bore the mark of a master photographer. The instant I saw the image, I knew who took it: Frank Christopher, Scott’s dad.

Frank Christopher — “Cheetah,” we later called him — was the most eccentric, and intriguing, figure in my neighborhood. The housing development was called “Pine Springs,” and we arrived in 1957 after my father’s Air Force intelligence career had taken us from Germany (where I was born) to Spokane, Washington, and finally to an old government office building located where the Air & Space Museum now stands. Pine Springs was a new development of modest homes with interesting modernist architecture that stood on the edge of a seemingly endless forest stretching north and west to Tysons Corner (then just a gas station and road house) and beyond.

Scott and I played and explored in that forest.  We caught turtles and crayfish, built forts, and brought home jars of tadpoles that would inevitably surprise us by turning into a chaos of tiny frogs in the garage and house. When we weren’t being Tom and Huck, Scott and I played in pick-up football and baseball games, or just took off on journeys by ourselves that no 21st century suburban child would ever be allowed to do. When Scott wasn’t at my house, I was at his, and when we were apart we still found a way to connect — including a tin can phone with a 300 foot string.

It was, as Scott has written, “truly magical.” It began the moment the school bell rang and continued until we were ordered inside from the growing darkness — and often not even then.

Into this self-contained little world, where an entire day could be spent looking for four-leaf clovers or attacking a huge wasp’s nest or damming a rain-choked street gutter, adults only made brief … and mostly unwelcome … appearances. My father, like most of the other dads, awoke to a cough and the click of a Zippo lighter, a quick breakfast, then was off in our ’48 Jeepster or big-finned ’57 Chrysler in his brown suit and skinny tie to the “office” — only to return in the early evening, pour himself a cocktail, and, after dinner, fall asleep in the Eames chair while watching Huntley and Brinkley.

But Scott’s dad was different. I would sometimes see Frank Christopher, still lying in bed in the afternoon, watching movies on a black & white TV with a busted vertical hold. Or he was off playing golf in the middle of the day. But then, other times, he would disappear for several weeks at a time, his departure a flurry of activity. I knew that he carried a camera with him, but I don’t remember him ever taking a photograph. And when I did see one of his prints — “Strike Three,” a 1959 photo of Scott in oversized hand-me-downs taking a mighty hack which was one of the most honored images ever taken of childhood sports — I completely missed the artistry and laughed at the fact that Scott had missed the ball.

I did notice, in the summer of 1961, that Scott’s dad was gone for a long time — but it would be another decade before I realized that he had gone to Moscow to put on the first American photography exhibition in the Soviet Union — a historic event in the slow thawing of the Cold War in which my own father was a soldier.

The blizzard of 1962, combined with my father’s first heart attack, proved to be a turning point. My father retired from the Air Force and took a job with NASA in California. Perhaps it was because we sensed that everything was coming to end, but that spring still remains in my mind — and I know in Scott’s too — as the most idyllic moment of our childhood. And it was on one of those days that spring, on a trip to a farm in Chantilly, VA, that Frank Christopher took the photograph. Here it is; click to enlarge: 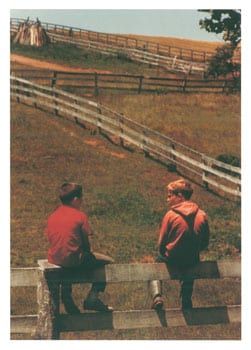 At first glance, “On the Farm,” as it was entitled in exhibitions, appears to be a casual photo. But it is nothing of the sort. The composition is far too complex; so I have no doubt that Frank, in his genius, placed us on that fence — and then just waited for us to get lost in conversation. That’s my red shirt — I wear it in my 4th grade school portrait — but as Scott has noted, he was told to wear this specific sweatshirt in order to balance the color.

Needless to say, what is most compelling about this photograph is not just the obvious relationship between the two boys, but that amazing fence zig-zagging into the distance. Scott, in his note to me with the photograph, wrote: “The fence in this photograph represents life to me: twists and turns, up and downs, but always moving forward.” I think he’s right, but I also think it captures the conversation of two young best friends — bouncing around ideas, spinning out dreams and plans, finishing each other’s sentences. It crackles like a bolt of lightning.

I think Frank Christopher knew all of that when he took that photo. He understood that he was capturing a singular moment of childhood that would never be repeated; and that he was also sharing an understanding with his adult viewers of what was to come for the two of us.

Two months later, at dawn, we pulled out of our driveway, loaded for California. The neighborhood was silent and asleep … except for a little face in a distant window: Scott crying and waving good-bye.

A decade later I would visit Scott in Virginia one last time. I drove up in my dune buggy, with long hair and tie-dyed shirt.  During most of my visit, Scott wore a baseball uniform — he was playing in the All American Amateur Baseball Association national championship. Though we have corresponded in the decades since, we have never again met in person. I’m not sure we even need to.

But the zig-zags of life were already taking their course. Celebrated at age 12 in Sports Illustrated for his athletic skills, by eighteen Scott was already paying for a tumble in a pile of broken glass he’d made at age seven playing with me behind a backstop. He severed all seven tendons in his right, throwing, hand — and only through years of dedicated therapy had he managed to come back — even earning a baseball scholarship and two MVP awards at the University of Maryland. The tendons had healed, but his right hand had been left slightly smaller and weaker than his left … just enough of a flaw to have pro scouts mark him down for having a “withered” hand.

At age 26 he wrote to me and described his final at-bat playing AA ball (along with Cal Ripken) for the Charlotte Orioles.  Reaching first on a fielder’s choice, he had stolen second; then broke for home on a single and made a spectacular scoring slide at the plate. Knowing it would never again be as good as this, Scott brushed off both dust and tears, walked through the dugout shaking everyone’s hand, cleared out his locker, and left baseball forever

Scott married young, had three beautiful daughters, and was widowed while still in his early thirties. But then he found, in Elizabeth, the great love of his life — and in photography, his lifelong career. He was Michael Jackson’s photographer for a while, as well as special assignment photographer for the Discovery Network; and has taken many of the photographs you see on posters and prints. These days, he lives in Santa Fe, and with Elizabeth has produced a movie and started a foundation for the arts.

And the photograph? Though never as famous as the baseball image, it nevertheless was part of Frank Christopher’s award-winning, international traveling exhibition. It was almost certainly shown at the 1964 New York World’s Fair — a legendary event I only saw on television from 3,000 miles away.

I knew none of this, of course. But those years have never been far from my mind. A childhood best friendship is unlike any other relationship in one’s life — purer, seemingly infinite in its possibilities, and forever bathed in a golden glow. And to have that friendship play out against a backdrop of such freedom and adventure was indeed “truly magical.”

The hard part about such a childhood is the certain knowledge that it is a paradise lost that can never be regained. The good part is that, wherever that fence leads, you always have that time in your heart to fall back upon whenever you need it. And when, this Christmas, a package from Santa Fe was opened to reveal a large print of “On the Farm,” I was able to turn to my wife and sons and say, “There’s my childhood.” And to tell myself:  It was real.

Update (1/20/11): Thank you for the exceptional response to this piece. A lot of the commenters asked to see the other photograph referenced in the essay:  “Strike Three” (1959) which has never before appeared on the Web. 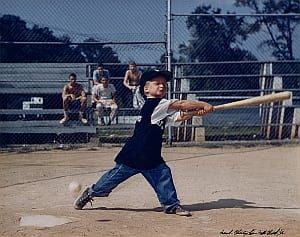 Michael S. Malone is one of the nation's best-known technology writers. He has covered Silicon Valley and high-tech for more than 25 years.
Read more by Michael S. Malone