The Big Apple is the city that never sleeps, but the massive layoffs on Wall Street and the precipitous drops of the markets have forced Manhattan to at least take a little nap.

If you talk to older New Yorkers who remember the FDR Depression, you might pick up on a sense of pride. Like veterans who survived a battle, senior citizens will tell war stories of how they adapted to an ailing America. Times have changed and now even cash-strapped students lug hundreds of dollars of electronic equipment with them to class every day with very little fear for their personal security.

The words “grit” and “New York” are no longer wedded since the Sex and the City image dominates the media and Times Square has become a major tourist attraction for family entertainment and not the seedy sex destination for lonely, suburban men or the workplace for entrepreneurial wayward women.

I came to Manhattan during the mid-90s and only caught part of what the city had been like during the crime wave of the 70s and 80s, when the yearly murder rate peaked just above 2,000, compared to the record-breaking 2007 total of under 500.

So, what does a guy armed with a dripping sponge attached to a stick and a bottle of diluted Windex have to do with a drop or increase in the rate of violent crime?

According to the theory espoused by law enforcement and explained in the book Fixing Broken Windows: Restoring Order and Reducing Crime in Our Communities, the devil behind delinquency was mostly in the details. The authors of the then-controversial study, George L. Kelling and Catherine Coles, argued that by controlling the minor infractions — graffiti, litter, and the symbolic broken windows — law enforcement primed the crime prevention pumps for curtailing the bigger crimes: drug dealing, rape, and, yes, murder.

In the authors’ own words:

Consider a building with a few broken windows. If the windows are not repaired, the tendency is for vandals to break a few more windows. Eventually, they may even break into the building, and if it’s unoccupied, perhaps become squatters or light fires inside.

In 1993, Mayor Rudy Giuliani and his police commissioner Howard Safir adopted the “Broken Windows” strategy and sold it to the pubic under the “zero tolerance” and “quality of life” initiatives.

Loud noises met with fines, adult book stores were strictly zoned, traffic tickets were increased for “blocking the box,” and the squeegee man became persona non grata on the streets.

The Republican mayor Giuliani was widely smeared as a “dictator” in a city where donkeys outnumber elephants six to one, but after a failed Dinkins administration — a mayor who was progressively heralded as the first black mayor of New York — the public complaints of a tougher Giuliani administration did not match the private voting practices of the majority of New Yorkers. In the 1997 election, the right-wing Giuliani beat his far-left opponent, Ruth Messinger, by 17 points.

The swash of the bedraggled squeegee man gave way to the swish of a pristine Disney Broadway, a squeakier-clean version of the city.

Recently I watched a squeegee man clean a couple of windshields at a stoplight on 44th Street and 9th Avenue, where a few drivers reluctantly handed over some money after the man wiped the windshield. The taxi drivers, who typically carry their cash in hand, aggressively shooed the squeegee man away. During the bad years, taxi drivers were the ambulant version of an ATM, so cabbies making an all-cash living were targeted for muggings and, sometimes, even murder. 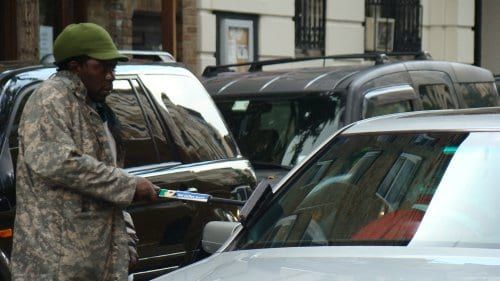 Is the return of the squeegee men a sign of a relaxing of law enforcement under the Bloomberg administration or just the harbinger of economic hardship as the city sheds jobs in both the public and private sector? The mayor’s office announced the reduction of the police force by 1,000 uniformed officers, while Citigroup recently gave pink slips to 50,000 workers.

From the decade of the kinder and gentler 90s to the millennial shift toward hope and change, the crackdown on petty crime as a gateway activity to bigger and broader opportunities has largely taken a back seat to the focus on hand-to-mouth bailouts. On the streets of New York, the squeegee men have largely gone unchallenged by both authorities and drivers. Will we see more squeegee workers and an increase in crime throughout the nation? As New Yorkers like to say, “Everything happens in New York first before anywhere else in the country.”

Matt Sanchez is a war correspondent and writer located in New York City, where he currently covers the United Nations. He's a frequent contributor to the Fox Strategy Room and a commentator on the French language program Kiosque.
Read more by Matt Sanchez