At Sunday’s pro-Palestinian “Break the Siege in Gaza” (BTSG) rally in Times Square, I had an altercation with a NYC cop who works with the Community Affairs division of the NYPD. He refused to give me his name, so I’ll just call him the “lieutenant.”

I was across the street from the BTSG group, taking pictures, when a pro-Israel group, sponsored in part by the Silent Majority, started to set up shop. The NYPD interrupted them and told them to move their group to an assigned pen on 39th Street, three blocks away. Some members of the group objected and decided to carry signs up and down 7th Avenue. Others accompanied the police to the 39th Street area. I was walking back and forth between the two groups when a friend with an anti-Hamas sign told me that a policeman had threatened to arrest him because he was walking around outside of his pen. I asked who it was and he pointed to the lieutenant. When I asked the lieutenant if that was true, he told me to move along.

I thought that if I took out my camera, a person who was apparently trained in community relations would express some interest in politely explaining police actions to the community. As you can see in this video, that’s not what he did. When I asked a few questions about freedom of assembly, he pushed my hand and the camera away and told me to stop recording.

One organizer from the Silent Majority, who is also affiliated with Gathering of Eagles, said that the police seemed to be harassing pro-Israel and pro-America folks lately. She believed that these pro-Palestinian rallies were defended on site by teams of lawyers. Also, she said, we “know Bloomberg has used CAIR to instruct the police to be ‘sensitive.'” At the recent Gaza war protest in San Francisco, photojournalist Zombie noted the same phenomenon. 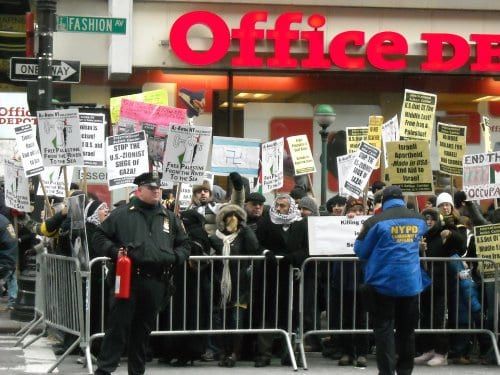 Are the police taking sides? Are they trying to avoid violent confrontation by pressuring the supporters of Israel, who are less likely to be violent or to cry “Islamophobia”?

Probably — by now, the police know how violent these Gaza rallies can be. A synagogue was firebombed and cars were torched in France. Protesters threw stones and firebombs at riot police in Athens. In London, protesters burned Israeli flags and hurled missiles, including fireworks, at the police. At these fiery rallies, the subject of peace rarely comes up.

The people who organize these rallies have very little to do with peace and justice. We have known for years that “anti-war” groups like International ANSWER are communist organizations, allied with the Workers World Party and supporters of Kim Jong Il. A protester within the “Break the Siege in Gaza” pen handed me a copy of the Workers World newspaper (“Workers and oppressed peoples of the world unite!”).

We also know that peace and justice groups are funded and supported by the financial and political branch of the Islamist terrorist infrastructure, the Muslim Brotherhood. Hamas is the Palestinian branch of the Muslim Brotherhood. In the U.S., the Brotherhood is represented by local fronts like the Council on American-Islamic Relations (CAIR), the Muslim American Society (MAS), and the Muslim Students Association (MSA). The MAS regularly asks for donations for ANSWER-sponsored demonstrations. The “Break the Siege in Gaza” demonstration in Times Square was endorsed and populated, not just by these usual suspects, but also by the openly anti-Semitic Al-Awda (Palestine Right to Return) Coalition. 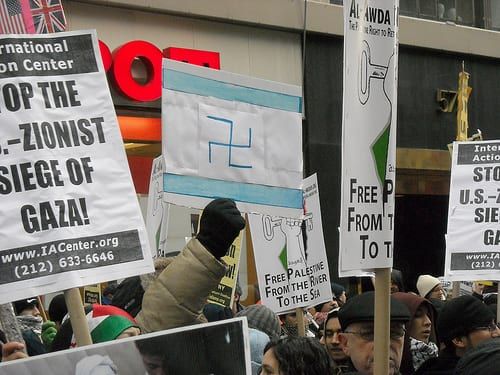 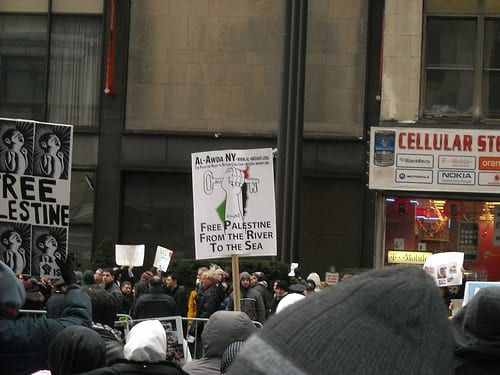 Are our authorities trying to “reach out” to these criminal groups? No. Although some State Department analysts and foreign policy bloggers like Mark Lynch are promoting the idea that America should follow Britain’s example of reaching out to the “moderate” Muslim Brotherhood in an effort to fight “extreme” groups like al-Qaeda, our government is wary of that idea. The supporters of negotiations with the Brotherhood usually fail to mention the fact that the Brotherhood is the common link to what ex-White House anti-terror adviser Richard Clarke called the “shared infrastructure levered by Hamas, Islamic Jihad, and al-Qaeda.” Hamas, the Muslim Brotherhood, and al-Qaeda share the same money, ideology, and goals. Like all brothers, they occasionally disagree.

British blogger David T., who has witnessed firsthand the disastrous results of this theory in practice, explains why this will not work. Basically, when a government openly works with extremist, criminal groups like the Muslim Brotherhood, they empower and legitimize them. When a legitimate government empowers a “moderate” bunch of criminals against an “extreme” group of criminals, they guarantee that one group of crooks will win. The group that wins uses any information they’ve gathered against the legitimate government. Since the legitimate government is openly working with criminals, citizens don’t trust their government to protect them. They lose hope or they turn to the toughest mob — or to random opposing vigilante gangs — to protect them. Moderation and democracy wither away. We can see the effects of these policies in Britain today.

Although the NYPD has worked with CAIR in the past, they used what they had learned about Islamist groups in America to expose the machinations and influence of groups like CAIR in the document “Radicalization in the West: The Home-Grown Threat.” CAIR was seriously peeved about that. It must be annoying to have your own tactics turned against you.

The federal government’s successful prosecution of the Holy Land Foundation revealed that many influential Muslim organizations were among the “entities who are and/or were members of the U.S. Muslim Brotherhood’s Palestine Committee.” Exposing the corruption and criminality of these organizations paved the way for RICO-based lawsuits against the MB and its affiliates. One such lawsuit has already been filed against CAIR.

When, as a federal prosecutor, Rudy Giuliani reduced mafia influence in New York, he didn’t use the British method of empowering “moderate” extremists. If he had, John Gotti would probably have become president. Instead, he slowly dismantled the mob through the use of RICO statutes.

So, yes, some members of the NYPD, like the lieutenant mentioned above, could use some more schooling in public relations. But our authorities generally seem to be heading in the right direction. The wheels of justice grind slow, but they grind exceedingly fine.

Mary Madigan is the publisher of the Exit Zero blog. She also guest blogs on Solomonia.
Read more by Mary Madigan