In February this year, Christian evangelists Arthur Cunningham and Joseph Abraham were doing what Christian evangelists do: handing out Bible extracts. They were stopped by a representative of the law, threatened with arrest if they carried on preaching in “a Muslim area,” and warned that they might get beaten up if they came back.

Where did this incident take place? Saudi Arabia, Iran, or Pakistan, where Christian preaching is forbidden and apostates persecuted? No, this “Muslim area” was in Alum Rock, Birmingham, England. That’s right — England, cradle of free speech; England, a country with an established, if enfeebled, Church, and where seventy-five percent of citizens (at the 2001 census) describe themselves as Christian. The man who stopped the evangelists, calling their preaching a “hate crime,” was Naeem Naguthney, a police community support officer (PCSO), and a Muslim. Granted, a PCSO is not a full police officer, and has only limited powers of law enforcement. But which law was he enforcing? It looks suspiciously like Sharia.

This is not the first time an English “Muslim area” has hit the news. In 2006, Muslim preacher Abu Izzadeen expressed outrage that then-Home Secretary John Reid was visiting “a Muslim area”: East London. Yet when the bishop of Rochester recently warned that Britain was developing Muslim no-go areas, he was denounced by Muslims as — what else? — Islamophobic. Many non-Muslims joined in the condemnation. Others argued that the no-go areas were ideological, rather than literal, but this argument rather misses the point: Islam is, and always has been, territorial.

The choice of words — “Muslim area” — is significant. Non-Muslims are not merely told that their behavior might upset or anger Muslims, but that they themselves are on Muslim soil, where such behavior is forbidden. As I have argued before, Islam is concerned far more with territory than with piety. Do the young Muslimahs in the picture below look pious? Or are they belligerently defending their turf? 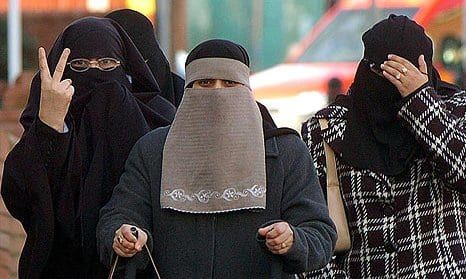 Each niqab allowed in the workplace, each new mosque, each “hate-speech law” is, as London’s new Mayor Boris Johnson put it, “another yard of territory in the kulturkampf of modern Britain.”

Alum Rock has, in accordance with the tenets of jihad, been claimed for the Dar al-Islam. And once Islam has claimed an area, that area cannot be taken back without a fight. So, are we going to give them a fight? And fight not only the enemy, but those who appear to have sided with them: West Midlands Police?

West Midlands Police have not apologized, and instead of sacking Naguthney immediately, they have merely given him training on the nature of “hate crimes.” Such craven appeasement of Muslims is not unprecedented: it was the West Midlands Police force which tried to prosecute Channel 4, whose excellent TV documentary Undercover Mosque revealed the open sedition and hatred of the West preached in our mosques. That prosecution failed, but for now West Midlands Police must be seen as accomplices, albeit perhaps unwitting, in the jihad against our country.

Mr. Cunningham and Mr. Abraham have fired the first shots in the counter-jihad: they are demanding a full and unreserved written apology from West Midlands Police, and have given notice that they regard this incident as a breach of their convention rights under the 1998 Human Rights Act. They are supported by the Christian Institute pressure group, and by Christian Voice, which plans to leaflet the area this weekend.

Outside this immediate battle, how do we fight the territorial expansion of Islam? My answer is simply not to accept that there are “no-go areas”: just go there. Libby Purves, writing recently in the London Times on the dangers of walking around London late at night, makes points that apply to all “no-go areas,” Muslim or not:

I am not foolhardy; I stay away from alleys and don’t flash jewelery. But I know parts of London in particular to be increasingly dangerous, and with growing caution comes growing rage. I will not be kept cringing indoors, not by day or night; nor should any man or woman in a free country.

It was another woman, Eleanor Roosevelt, who said: “Nobody can make you feel inferior without your permission.” So we, men and women, should not grant that permission, and should not pander to the assumed superiority of those who would intimidate us, whether thugs or Muslims or both.

Turning to “Muslim no-go areas”, here is my advice: just go there. Look those niqab-clad women in the eye — it is all you can look them in — and raise a quizzical eyebrow at their alien garb.

Look with contempt at their “masters” swaggering along in jeans two steps in front of them.

Above all, just go there.