The Upcoming Rachel Corrie Trial: Go After Her Real Killers

Jerusalem — Craig and Cindy Corrie, I welcome you to Israel where, I understand, you plan to bring a civil suit before an Israeli court on March 10 “to put on public record,” the British Guardian wrote, “the events that led to [your] daughter Rachel’s death in March 2003.”

I thank God for the well-being of my children and grandchildren, and I cannot imagine the pain and anger you feel over the loss of your daughter, Rachel.

My sons have served as combat soldiers, and may have actually fought on the very ground where your daughter died. The area was laced with tunnels to smuggle weapons and explosives for use against Israelis. My children are Israelis who ride in buses and eat in pizzerias, and by the grace of God they have been spared attacks by the suicide bombers your daughter championed.

Some may see the irony in your using the courts and the free press of Israel in your attempt to pursue and denounce the nation your daughter loathed. I see the tragedy in your allying with the International Solidarity Movement — the very people and organization who led and, in a sense, really pushed Rachel to her death.

According to news accounts, Israel will permit four of Corrie’s colleagues from the International Solidarity Movement (ISM) to enter Israel to give testimony on what occurred that day. Actually, I believe it’s a good decision to permit the four into Israel’s jurisdiction where the ISM members could and should be arrested for reckless endangerment, fraud, manslaughter, aiding terrorists, and a host of other charges. The public may also discover who paid for your lawsuit and the expenses of bringing you and ISM witnesses to Israel.

Mr. and Mrs. Corrie, three pictures relating to your daughter are etched in my memory.

The first is a very agonizing photo of your daughter broken and crumpled and bleeding in a Gaza field — with her ISM friends attempting to help her: 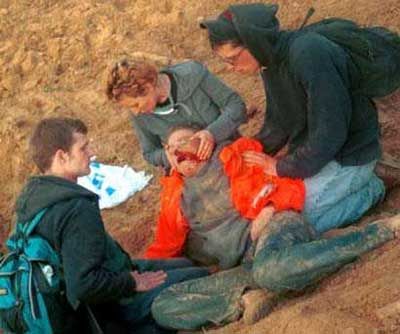 But I am troubled by the pictures. Who took them?  Someone from ISM, according to the organization’s literature. Why wasn’t that person aiding your daughter?  (God, I hope they were not posing her for a better shot!) What would motivate a person to not drop everything to help a wounded colleague? Is the ISM hatred of Israel so strong that his first priority was to document the scene? Was Corrie just an expendable foot soldier of an evil organization that used her for the photo-op? Apparently so. Her ISM colleague and handler Joseph Smith, who now takes the name Joseph Carr, eulogized Rachel with these horrifying words:

The second photo is that of a very angry woman surrounded by a mob of children as she burns an American flag at a pro-Saddam Hussein rally: 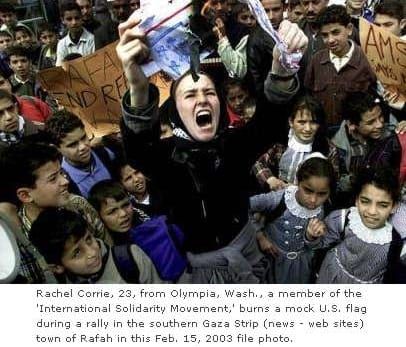 The rage is palpable. What did she hate more, Israel or the United States? I suspect the former, because she justified the use of  terrorism against Israeli civilians.  She imbibed the ISM philosophy, as stated by one of its leaders during an interview with Al-Jazeera: “We recognize that violence is necessary and it is permissible for oppressed and occupied people to use armed resistance and we recognize their right to do so.”

That radical belief is clear in a phone message Rachel left you, Cindy, with instructions on how to speak to the press:

Please think about your language when you talk to them. I think it was smart that you’re wary of using the word “terrorism,” and if you talk about the cycle of violence, or “an eye for an eye,” you could be perpetuating the idea that the Israeli-Palestinian conflict is a balanced conflict, instead of a largely unarmed people against the fourth most powerful military in the world.

Rachel spoke those words in 2003 after Israel had buried 1000 civilians killed in Palestinian suicide bomber attacks.

And the third picture is of your earlier visit to the region to see where your daughter lived and died.  You were met and honored by Yasser Arafat: 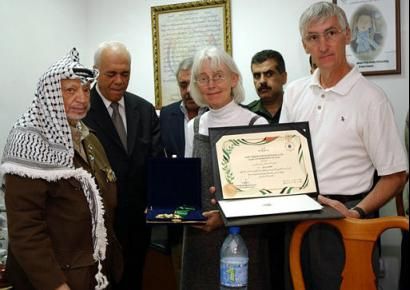 That is where you should have realized that you daughter was his pawn, another young idealist brainwashed into hating Israel. Arafat regaled in his “shahids,” the suicide bombers who blew up Israeli civilians. The New York Times documented the training of 25,000 Palestinian teens in the summer prior to launching the September 2000 intifada. Your daughter Rachel was another impressionable youth recruited for the Palestinian cause. I’m sure that is hard for you to believe, but read what her ISM buddy Joseph Smith believed:

“We knew there was a risk,” Smith said, “but we also knew it never happened in the two years that we (the ISM) have been working here. I knew we take lots of precautions so that it doesn’t happen, that if it did happen it would have to be an intentional act by a soldier, in which case it would bring a lot of publicity and significance to the cause.”

“Her death serves me more than it served her,” said one activist [unclear if the speaker is an IMS activist or a Hamas activist] at a Hamas funeral. “Going in front of the tanks was heroic. Her death will bring more attention than the other 2,000 martyrs.”

And Corrie herself discussed the possibility of an American activist’s death as a propaganda tool:

You just can’t imagine it unless you see it, and even then you are always well aware that your experience is not at all the reality: what with the difficulties the Israeli Army would face if they shot an unarmed U.S. citizen.

In July of 2004, the San Francisco Chronicle reported:

Rishmawi said the ISM’s main purpose is to increase international awareness of Palestinian suffering through the involvement of foreign activists, who pay their own way to the West Bank, where they are trained in various methods of nonviolent direct action.

“When Palestinians get shot by Israeli soldiers, no one is interested anymore,” Rishmawi said. “But if some of these foreign volunteers get shot or even killed, then the international media will sit up and take notice.”

Mr. and Mrs. Corrie, leave Israel with our deep condolences. It may be easier for you to live with the belief that Rachel was an idealistic fighter for peace. Maybe she was, but she was also used as a tool and discarded. ISM actually tried to market her as the “new Anne Frank.” Her life was wasted by a cruel, opportunistic, radical movement for whom the ends justify the means.

The writer served as a senior Israeli diplomat in Washington. Today he is a consultant on public affairs and blogs at www.lennybendavid.com.
Read more by Lenny Ben-David