In my previous article, I laid out many of the most common misconceptions of how the electrical grid is built, operated, and maintained, and just precisely what is meant by the term “smart grid.” This leads to a number of questions and choices regarding the future — specifically, how telemetric load control (what “smart grid” really is) works with wind power and electric cars.

Wind power has been heralded by its proponents as the future of electrical power generation. I specifically am not going to discuss the merits of wind power vs. coal, nuclear, solar, or any of the other possibilities. I am decidedly not advocating any particular source. What I am doing is noting the time scheduling characteristics of wind, why that’s a problem, and how telemetric load control — particularly if a significant penetration of electric cars catches on — might work together to mitigate one of wind’s major drawbacks, and why that’s probably going to have a limited effect.

The Bonneville Power Administration is a federal agency that operates a series of hydroelectric generators in the Pacific Northwest. Recently, they’ve added a substantial number of wind generators to the system, and they make the actual operating data available on their website. The data is very high time resolution, and includes aggregate wind production at 5-minute intervals. A sampling of this aggregate power production data at various times of year support BPA’s statement that output from wind is “essentially random.” “Essentially random” in this case means that the aggregate output can range anywhere from literally zero to almost two gigawatts, and typically switches between almost zero and over one gigawatt several times a week. It spends a rather large amount of time at close to zero output. 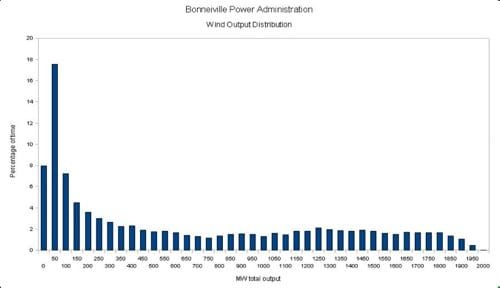 This histogram, created from their online data for the period of January through June 2009, shows the aggregate power output to be up to almost two GW but far more likely to be very close to the low end: with the aggregate output being between 50 and 100 MW about 17% of the time, and between 0 and 50 about 8% of the time, with the remainder of the 50 MW increment “bins” averaging about 2% of the time each. This kind of distribution is rather difficult to compensate for, since it has essentially no baseload output, and requires 100% reserve.

Bonneville, of course, can manage this because they have many times the hydropower capacity as they do wind. Hydropower plants, unlike base load thermal plants, can change output very quickly, and complement wind extremely well — there’s typically a limit on the total amount of water available, and the highly variable wind power allows them to save water for another day.

But this is something that can’t be replicated anywhere else in the U.S., and can only be done in a few hydropower-rich locations in the world.

The more typical situation currently is that there are a few token windmills that are such a small part of the mix that they get lost in the baseload, as natural gas-fired peaking plants, that are there for other reasons, take up the slack. As long as wind is contributing in the low single digits of the percentage of the power, that’s not a huge problem, but as it starts to become a major contributor, that becomes a bigger problem.

The problem is somewhat mitigated by spreading the turbines out over a large area, so that the average wind speed at any given time is more uniform. But that doesn’t solve the problem. It just makes the need to make up with another source less, on average, and it makes an event of the total wind over the broad area dropping to a very low percentage of capacity less likely. But not impossible.

There’s another issue that doesn’t get very much press: the fact that the reliability requirements make a spinning reserve necessary. A stationary reserve consumes no fuel. A spinning reserve consumes lots of it. As H. Douglas Lightfoot noted here, the efficiency of the spinning reserve plants is horribly low, so every additional kW of power generated from the wind turbines doesn’t reduce the fuel demand at the reserve plant by one kW equivalent. Or to put it another way, even with a fully functional wind farm, when wind is in double digits of the percentage of the system, the wind power has a significant carbon footprint.

The dream of a grid with a high wind content is predicated on a vast array of windmills spread though the center of the country from the Dakotas to Texas. This is sometimes called the “Pickens plan” after T. Boone Pickens, who has been advocating this for his own reasons. This would involve a lot of transmission lines to the coasts, with all of the cost and operation issues associated with that. But without any hydro plants to backstop the array, there would be a need for a lot of rolling reserve.

The behavior of an ensemble of wind generators that large and spread over that large an area is somewhat better than Bonneville’s system, which is concentrated in the Columbia River gorge. Even at that, studies estimate that only 33-47% of the average power produced can be considered reliable enough to be considered baseload — only 33-47% of the power produced can not be backed up. Not being able to audit where those numbers came from, it would be prudent to consider that to be an upper limit. Some large systems have 80% reserve capacity:

According to Eon Netz, one of the four grid managers in Germany, with 7,050 MW of wind power capacity installed in its area at the end of 2004, the amount of back-up required was over 80% — which was the maximum output observed from all of their wind power facilities together.

So practical systems have very high proportions of reserve capacity, a certain amount being rolling reserve, and the rest being standby.

Telemetric load control could, however, help mitigate the short-term ups and downs, but there is still this basic problem that requires very large investments in intermittent plants and significant fuel consumption in rolling reserve plants. The ability to use telemetric load control is going to be determined by the ups and downs over a 24-hour period, or often even less.

As I mentioned before, time-of-day pricing for electrical power is an old idea in commercial power marketing, and is currently reaching into residential. This chaotic element on the supply side from wind power could also be dealt with by a spot market, but its dynamics would be very different. Instead of a fairly predictable 24-hour cycle, the market would literally be at the mercy of the wind, and prices would be updated several times an hour based on an electronic real-time auction. When the wind starts blowing, and electricity suddenly becomes available, the price will plummet, and when the wind hits a lull, prices will rise, quite dramatically. This, of course, wouldn’t be the only way in which electricity would be purchased, but would be the preferred method for large purchases, and the bidding on the consumer side might be an automated response by the appliances.

Tthere’s not a lot of typical residential, commercial, or industrial load that can be shifted very much. Electric cars would change that. Their need to charge when idle opens a new category of flexible load. So they seem to be an ideal compliment to wind power and telemetric load control. And the consumer gets a significant discount on the electricity (which is already a lot cheaper per HP-hr than gasoline, even at wind power prices) in exchange for an agreement to have the car plugged in for charging over a specified period.

As with windmills, I have no intention of delving into the merits and demerits of electric cars, nor the likelihood of them becoming a really viable replacement for the internal combustion engine. That’s a very long article by itself. This is just about how it may impact the electrical grid.

To get an idea of how much impact on the grid this would have, according to this diagram from the Department of Energy covering the year 2002, the total amount of “useful energy” used in transportation was 5.3 quads, and the total amount in the electrical grid was 11.9. So adding all of the transportation demand on top of the grid would add another 45%. This is significant, but will never happen completely, and is unlikely to even get to 50% of the transportation usage in the foreseeable future — which would be 22% of current capacity. If that were to happen over 22 years (a very ambitious goal), that would add 1% per year to the growth rate. Not a particularly huge impact over time, as far as transmission is concerned, but it will require a sustained growth in generation capacity that will inevitably make someone unhappy.

All of this, of course, assumes that charging will be done overnight, which will help balance the grid. But consumers will undoubtedly demand and receive a “quick charge” option, which will resemble a gas station, and where an electric car can drive in, charge in 5-15 minutes, and drive out. This seems like a boon on its face, but will seriously aggravate scheduling and distribution if these become popular. The only way this will be practical is if the pricing of the energy itself is according to the spot market mechanism (above). This could very well mean that a fillup of a 100 kwH battery might cost $50 or more during the evening commute, while that same station will fill that same battery for $20 at 3 a.m. You could easily see 2:1 price swings or higher within a 24 hour period for a “tankful” of electricity. Or, if the wind suddenly starts blowing where the windmills are, the price for a “fillup” might drop from $50 to $30 over the course of 15 minutes. This is because it isn’t energy you’re paying for, it’s energy at the right time in the right place.

It goes without saying that there are many more facets to this, and those are just the known unknowns. Over the next few decades, many unknown unknowns will undoubtedly emerge, quite likely changing the picture substantially. Aside from cost-of-money, it’s unwise to overbuild any system. As an example, if a major breakthrough in fusion occurs, the wind option may very well become obsolete, and along with it all of the long-distance transmission apparatus. Another breakthrough which would radically alter the way the grid is put together would be room-temperature superconductors. So wise business investment practices always favor deferring action until it’s actually needed.

All of this paints a picture of an evolutionary path to a possible future with substantially reduced petroleum consumption and even a realistic chance of energy independence. But none of it requires any kind of crash spending programs on the power grid. If lots of wind power is added over the next decade or two, transmission infrastructure will need to be added to support that, but that will have to be included in the wind projects themselves.

Let me be clear about one thing: generation capacity is dangerously low in some locations, and in a few specific locations, transmission capacity is stretched dangerously thin. Those are local issues, and not a national problem. And one of the largest reasons why generating capacity is dangerously low in some locations is that building has been difficult due to political and legal resistance. It makes no sense for the same government that is preventing new generating capacity from being built to overbuild the transmission infrastructure, in the irrational hope that if you build it, the electrons will come.

In the next installment, I will discuss some things that will require immediate attention, but they’re not directly capacity related. They bear directly on the security of maintaining and operating a large and complicated grid.

Larry Reisinger is a licensed professional engineer in Chemical, Control Systems, and Electrical Engineering, with a Masters in Chemical. You can find his writing at www.theblogmocracy.com.
Read more by Larry Reisinger
SHOW COMMENTS