According to the political science students in Che gear who appear to write most of the MSMs copy, the “Red Shirts” who battled it out with the Thai police and army this weekend are rural poor, angry with the “Bangkok elites.”

This may be true in some respects, but former Prime Minister Thaksin Shinawatra, whose face is embroidered on the nice new red polo shirts they wear, was the ultimate “Bangkok elite.” 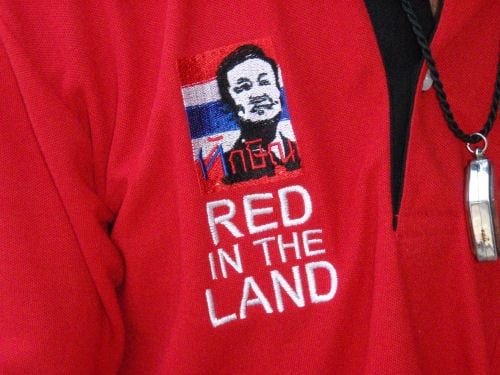 He has a net worth beyond the reckoning of most, and owned telecommunication companies and businesses throughout Asia before he entered politics. When he first came to power, everyone — including the so-called elites — loved him.

By 2004, Thaksin’s war on drugs, which resulted in over 2000 deaths in just a few months, prompted the beloved king to publicly inquire as to why so many of his subjects had been killed with out any sort of due process.

Media outlets that Thaskin didn’t directly own were censored and pressured. By 2006, the anti-Thaksin “Yellow Shirt” protests were in full swing — these were huge, largely peaceful, and non-disruptive. Thaksin did not take kindly to a nightly lampooning of himself and his family by actors performing a traditional Chinese-style opera.

When the 2006 coup initially occurred, most in Bangkok feared Thaksin was seizing more power. When it became apparent that the coup intended to overthrow him, the soldiers — who wore yellow ribbons as a sign of their loyalty to the king — were given food, water, and flowers by the locals.

Thaksin’s Red Shirts descended on the city this past month: well-funded, well-organized, and possibly the most mobile “protest group” ever. Via text messaging, the Red Shirts manage to suddenly occupy an area in huge numbers with amazing speed. They arrive in trucks, on motorcycles, and in tuk-tuks, shutting down a target area while the authorities scrambled to catch up.

Six weeks ago, news of the coming Red Shirt invasion made its way through “expat” circles in Bangkok. “A lot” of M-79 grenades disappeared from an armory, and shortly afterwards the police raided small machine shops, arresting the owners for manufacturing M-79 launchers.

But the actual arrival of the Red Shirts, in mid-April, seemed less ominous: waving banners, honking horns, and clacking noisemakers, while soldiers armed only with batons simply watched with everyone else. It was not until the second weekend of protest that the size and nature of the mob clarified. Mixed in with the Red Shirts were the black-shirted “gladiators,” whose function was to mix it up with security forces. 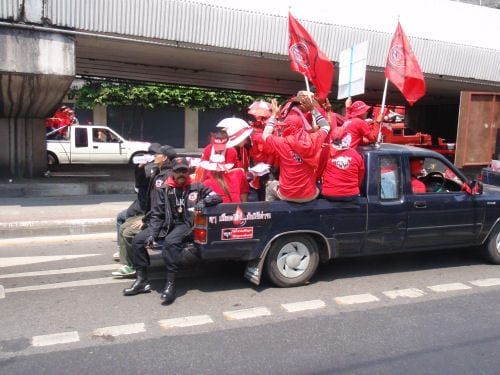 Still, the first two weekends passed with limited violence. Several soldiers had a grenade shot at them, and some locals confronting the mob left with broken noses, yet the violence everyone feared never materialized. For the most part, the soldiers disappeared from the streets and transit system, and over the course of the next few weeks the Red Shirts just became part of the scenery. Another curiosity for tourists, another annoyance for the locals. They received some international attention with their blood stunt, but not enough, and since they’d failed to provoke a confrontation it was assumed they’d dissipate and leave.

I actually expected it to “kick off,” as the British expats like to say, on Easter weekend. I had been at the now famous “Bangkok shopping district” (though I am unaware as to which part of Bangkok couldn’t be so named). This area has several malls built in close proximity, as well as hundreds of small shops, vendors, and kiosks selling clothing, food, and anything else. It is a central transfer point on the Bangkok transit system’s Skytrain. I exited one mall, the Siam Center, and was heading to another, when the Red Shirts arrived en masse on Sukumvit Road — in front of the mall and beneath the Skytrain tracks.

They were no longer parading but static, chanting, and becoming increasingly agitated by speeches piped out of their trucks. The mall security panicked — they frantically ushered tourists and locals out of the malls and up to the Skytrain while setting up barricades to block entry. The mall cops were well out of their element, their duties usually amounting to telling Europeans to extinguish their cigarettes. Some Red Shirt enforcers came near the doors of the upscale Siam Paragon Mall, likely seeking toilets, and the security guards were clearly afraid of them. I was swayed to leave the area as well; seeing “Gladiator” embroidered on their black jackets certainly encouraged my departure.

But nothing happened, and on this went. Red Shirts, cautious authorities, citizens complaining about both, and hot season getting hotter, with everyone looking forward to Songkran, the Thai water festival.

This weekend I went to the huge MBK discount mall, found what I needed, then mistakenly lingered before heading back to the BTS National Stadium Skytrain Station. On the platform, it was apparent something was up. The trains weren’t running with their usual frequency, the platform was packed, and when the train did arrive we sat awhile before going one stop to the Siam Station. Here everyone was ordered off the train.

I had intended to switch to the other line and take an eastbound train home, but the trains were no longer running that way, and beneath the station were frenzied Red Shirts. Locals scrambled to the lower platform to head in the other direction, and eventually a BTS supervisor explained in English that the tourists should do the same.

Tourist had no clue regarding the severity of the situation. A kind couple from the UK, on vacation with their child, latched on to me and rode the Skytrain north of the troubled area. I explained as best I could what was going on: they could attempt to take the “khlong,” or the canal boats that run east and west just north of the line we’d just been kicked off of, or they could take a taxi. I advised against the khlong as the canal would run under a bridge that I expected the Red Shirts would be occupying, so we agreed to take a taxi together and I would escort them to their hotel.

It took some time to find a willing taxi. We paid double the normal fare, but gladly. We drove along New Petchburi Road heading east towards Nana Road, and we crossed the elevated fly near the Central World Mall and we saw the Red Shirts gathered. I have seen many protests and mobs before, but never like this. There were thousands upon thousands of Red Shirts and a thin line of riot police. 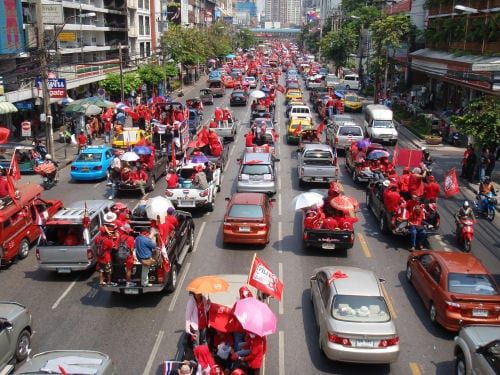 Sukhumvit Road between Nana Road and Asok is lined with little vendors and kiosks, many run by deaf mutes. They were scrambling to clear their goods and take down their stalls.  The Red Shirts had arrived and were setting up roadblocks on the westbound lane of Sukhumvit. 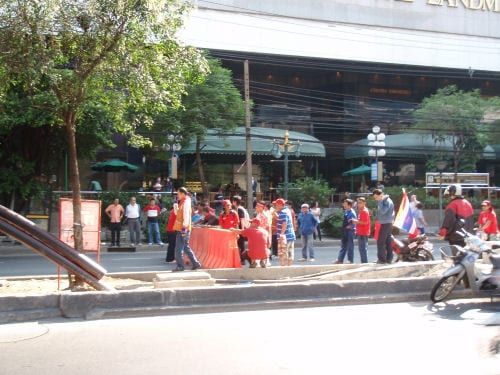 Throughout the trip I received text messages from friends, reminding me of Gangs of New York when the telegraph reports are read as narration:

I met other expats at a local American-owned eatery. Canucks, Brits, and other “Farang” with their Thai spouses, while four BTS stops away was raging hell. I walked to my apartment watching ambulance after ambulance. I walked past a young Thai couple on a moped, still in their red outfits, not bleeding or visibly hurt, but just staring blankly, perhaps in shock from what they had escaped.

I didn’t really know until I saw the local news coverage from home. Protesters beating cops and soldiers to the ground; terrified and outnumbered soldiers unloading their M16s as their armored car was swarmed. Frightened media, some bleeding, fleeing the Red Shirts, who viewed whichever news outlet they represented to be hostile to the cause. Red shirts carrying injured comrades out, women, people who looked like your local shop owner or hairdresser. Shot, beaten, bleeding, crying from clubs, bullets, tear gas, and the crush.

The soldiers are young, 18 and 19, conscripts unlucky enough to be drafted and probably fighting people from villages or towns no different than their own. I watched the heartbreak until 1:00 a.m.

Next morning, the papers told the tale of “events.” I had breakfast at a British pub and was advised by a delivery man who saw me with the Bangkok Post to not read it; it says the Red Shirts are bad.

The official death toll is around 15, including one AP photographer. Injured are reported near one thousand. I would suspect the actual death toll is much, much higher, as both sides had guns and both sides used “spray and pray.”

The Red Shirts came looking for violence, got what they wanted, and now use it as a rallying cry to overthrow the current government. The conflict is far from over, and we don’t know how bad it will it get and how quickly.

And, as of moments ago (Monday afternoon, EST):

The Election Commission decided on Monday evening with majority vote to dissolve the ruling Democrat Party in connection with donation cases.

Don’t expect this news to halt anything.

LD Thomson is a Canadian expatriate, writer, and electronic musician who has lived in Southeast Asia since 2000.
Read more by L.D. Thomson
SHOW COMMENTS