It is melancholy to contemplate how the noble arts of painting and sculpture, which once did so much to illuminate the life and times of humanity, have festered in near oblivion these many years. Indeed, while in the scientific and mechanic arts the practitioners of our age may rightly smile with amusement upon the quaint efforts of former times, the same can hardly be said of those who wield the brush and the chisel.

Indeed, were these moderns to present their paint-dribbled canvases and wreckage collections in contest against the works of Raphael and Michelangelo, the judgment of the spectators would likely be so severe as to have them whipped from the premises. This, methinks, is not the result of any lack of talent among the moderns. On the contrary, the very fact that they have managed to obtain high rewards and accolades while peddling such rubbish demonstrates a degree of natural capacity that is beyond dispute.

Rather, the problem has been that these men and women of talent have lacked proper subject matter for their efforts. Thus, while the field of depiction of great scenes of human triumph and tragedy provided so much ready material for the artists of former ages, it has been denied to those of our own time, as these must contend in their efforts against photographic machines through which in the merest second any oaf can set at nought the product of months of labor of genius.

But now, a singular event has occurred, which presents the chance to reverse this horrid devolution, and return the visual arts once again to their rightful hallowed place in the temple of the Muses. To this, credit can only go to the young Prince of America, who, demonstrating his decorous taste, has forbidden the release of the photographs showing the death of the celebrated villain, Osama bin Laden. What lover of Belle Artes cannot but rejoice at this pronouncement? For now, that which was cheaply taken has been returned to its rightful owners. Once again, it is through the eyes of artists, who can see things as they should have looked, rather than as they merely were, that history can be recorded.

Consider: had the Prince provided the mechanical simulacrums as demanded of him by various members of the mundane multitude, all that we would have to look upon would be some morbid montages of mutilated mortality. But with such poor substitutes for vision removed from interference, we may now enlist the aid of our artists, and bear witness not merely to the remains of Bin Laden, but to the actual scene of the blackguard’s demise.

Perhaps the dramatic scene of the action appeared thus: 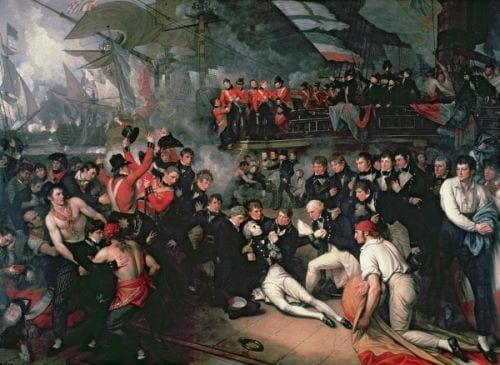 Death of Nelson, as depicted by Benjamin West

Is this not grand? Were our artists to give us something in this vein, we could verily watch Bin Laden fall whilst smelling the smoke and hearing the deafening reports of the musketry, and even so, listen with admiration to the whistle of the bullets as they fly past our ears, for truly there is something charming in the sound.

Yet, we need not be limited to this, for the same scene as envisaged by one servant of the Muse might be seen by another in a way entirely different, but still equally admirable. Thus, the last moments of Bin Laden might have occurred in this manner: 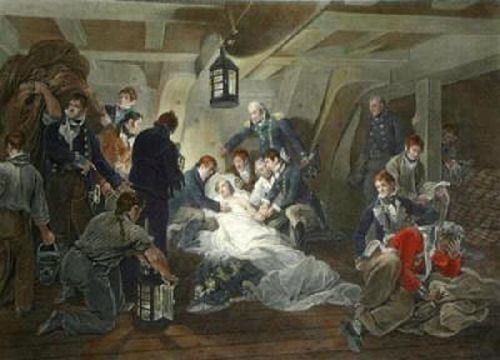 The Death of Nelson, as depicted by Andrew William Devis

See him there, in the cabin of a Ship of the Line, to which he had been taken wounded by Navy men, deeply concerned for his well-being. Oh the sorrow, the pity, that he could not be saved and brought to America, where he might have explained himself to one and all, assisted perhaps by the gentle hospitality of Piers Morgan or Rachel Maddow.

Yet, I must admit that the aforementioned works, while admirable enough in their way, lack a certain je ne sais quoi, in that they fail to present the protagonist in combination with his antagonist, and thus convey an incomplete and ultimately not fully satisfying representation of the drama in question. What is needed, rather, is a depiction in the style of the rightly classic work below, in which we see Darius and Alexander, each the paramount representative of their respective causes, confronting each other, as surely they should have, on the day of their decisive combat. 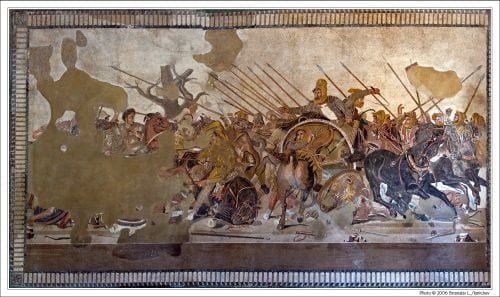 Alexander Encounters Darius at the Battle of Issus

Accepting this fine work as our model, we find without difficulty Bin Ladin as an excellent modern counterpart for Darius, but who can we have for Alexander? Surely none of the sailors sent to dispatch him will serve. For as useful as such stout fellows might be in a brawl, they are hardly suitable subjects for great art, in as much as they are mere nameless ruffians, and ugly ones at that, self-disfigured as they are by their savage war paint and their absurdly-styled Prussian hats.

No for Alexander, we should have a person of rank. Unfortunately, this cannot be the Prince himself, nor the craven rotundity who serves as his war minister, for both of these were caught by a photographer with several other leaders of the court sitting about amusing themselves by watching a sporting event upon the palace television screen at the very moment of the climax of the battle. And even were this not the case, neither of these dainty gentlemen would be well cast for the role in question.

Fortunately, however, the one among the palace retinue most known for warlike ardor was not to be seen in that now famous image of dissipation. I refer, of course, to my own countrywoman, Samantha Power, to whose courageous action in snatching away the Prince’s hashish cigarette long enough to delay the stupor through which he customarily contrives to endure war council meetings, the citizens of Benghazi now owe their lives. About this, much more could be said, and no doubt will be in time. For our purposes, however, it suffices to note that, whatever her other qualities may be, it can readily be seen that, among all the Prince’s generals, this brave spitfire manifestly possesses the highest degree of those attributes most necessary for great art. 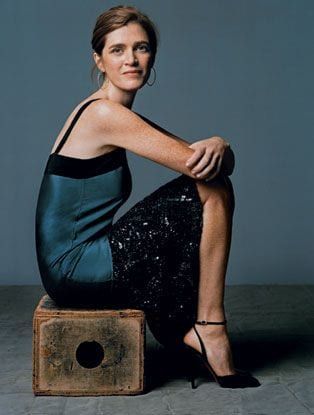 How then, might a true artist depict the death of Bin Laden at the hands of Samantha Power? One suitable model could be that of the scene of the demise of the brigand Jean-Paul Marat at the hand of that grand heroine, Charlotte Corday. 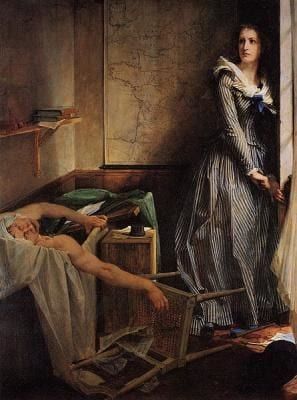 Death of Marat, as rendered by Jacques-Louis David

The merit of such an approach speaks for itself. Yet there are some defects, as while Marat and Bin Laden were both terroristic enemies of civilization, the politics of Ms. Power and Mademoiselle Corday are not fully congruent. Furthermore, Marat was slain in his bathing tub, an unlikely, if not impossible place to find Bin Laden. Finally, it must be said that were Ms. Power to be inserted in the above painting, it would fail to do justice to her most creditable and important feature, to wit her magnificent head of fiery red hair.

In this critical respect, the superb Italian master Sandro Botticelli does a much better job in his famous rendering of Judith with the head of the villain Holofernes. 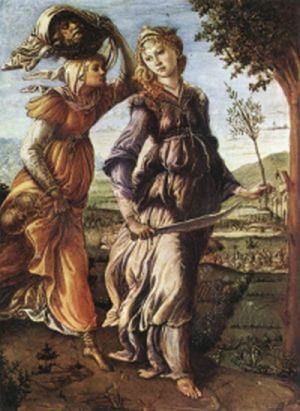 Judith with the Head of Holoferenes, as rendered by Sandro Botticelli

Except for the lack of sufficient force of grotesquerie in the detached head, this might well serve. This defect, however, is remedied in the work on the same theme by our own Cranach. 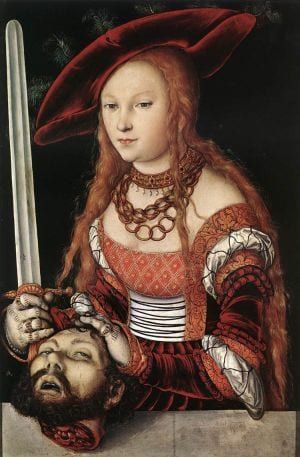 Judith with the Head of Holofernes, as rendered by Lucas the Younger Cranach

Of course, artistic renditions of grand events, while most conveniently done in paint, need not be limited to that medium. Thus, an excellent statue commemorating the death of Bin Laden could be done after the same model as that employed by the preceding canvases, as shown by the immortal Donatello. 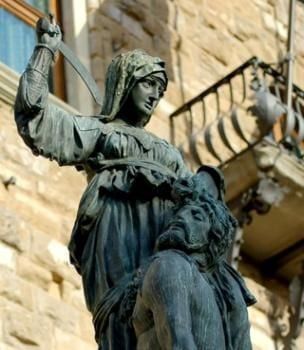 Judith with the Head of Holofernes, as rendered by Donatello

There will, however, be those who object to the depiction of Ms. Power in the guise of a heroine of the Israelites, in as much as she has indicated on a few rare occasions that she would prefer to see this nation removed from the surface of the Earth. To those who would make such complaint, I can only cry: have you no pity? Is it not clear that within the circle within which Ms. Power finds herself, that such views are de rigueur?

Consider but for a moment, that even whilst the King of Assyria was shocking the world though horrid massacres of those subject to him, the Prince himself chose the moment to set forth a plan to reward said tyrant through the return of the heights of the Golan, from whence his cannons might also rain doom down upon the Hebrews — the excuse being that said hills were owned by his father some forty-four years past.

Cast among such confederates, how could the fair Ms. Power embrace any other opinion and still hope to advance her career, so necessary to properly provide for her poor little boy, who without her support, would need to subsist upon the pitiful pittance provided by his father, a man who, without his palace post, would be a mere professor of law at Harvard?

But there will be those who fail to understand, and moreover, in their crude desire for literal realism, would insist upon placing not the beauteous Ms. Power, but the far less comely American navy men, at the scene of the event. In this extremity, a useful model might perhaps still be found in the statue below, albeit with the replacement of the flagstaff by a pike. This done, the imagination of the artist could be usefully employed in determining the instrument’s final address, and rendering the details of its insertion in a suitably sensuous fashion. 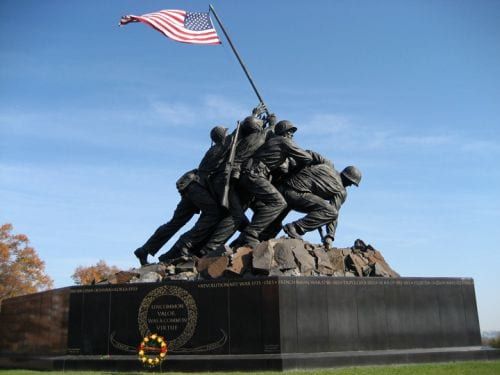 Were this carried out with proper attention to style, it might well provide a work worthy of remembrance, certain to be enjoyed for centuries to come by all the poor yokels and innocent children who come with eyes agog to see the grand monuments through which art, and only art, adorns, ennobles, and immortalizes the capital of a great nation.