Eric Holder Slides into the Depths of Race Politics 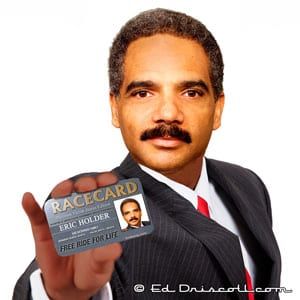 The nation has seen more than a few odd attorneys general over the years.  Among them have been the eccentric John Mitchell, Richard Nixon’s man at the Justice Department; Bill Clinton’s peculiar Janet Reno; and the personality-challenged John Ashcroft, who served under George W. Bush. Personal oddness or political partisanship is one thing, but an attorney general who plays the race card flirts with the ghosts of American history.

Since the days of President Lyndon Johnson’s crass racial attitudes, presidents and members of their administrations have understood the particularly destructive role that race has played in America’s past. Thus, they have generally avoided taking part in actions that inflame those wounds from a very ugly chapter of history.

Barack Obama and Eric Holder had the opportunity to help steer the nation toward race-neutral policies — perhaps into a post-racial era. Instead, the first black president has often dabbled in the politics of racial identity, and the first black attorney general has often shamelessly exposed his own solidarity with “his people.” This is the man who lectured us about America being a nation of racial cowards because white Americans haven’t engaged in sufficient “soul searching.”

However, this served as a lead-in to Holder’s reprehensible campaign to convince black Americans that their voting rights are under deliberate attack from “Republican-initiated” voter identification laws. Since last year, Holder has been on a tear, delivering this message to black audiences all across the country.

This divisive campaign has emerged on a short list of the Obama administration’s reelection tactics. Some other tactics are the claim that Republicans are waging a war on women and the class-warfare argument that wealthy Americans and Wall Street investment firms are getting richer on the backs of the 99 percent.

As the nation’s leading law enforcement figure, Eric Holder holds a great deal of political power. This makes his references to the existence of racially hostile political forces trying to rip away voting rights from black people all the more troubling and irresponsible. Holder is fully aware that blacks were forced to fight civil rights battles just to attain the right to vote in southern states. James Chaney, Andrew Goodman, and Michael Schwerner were murdered in 1964 by Mississippi racists while engaging in voter education and registration among poor blacks. Holder plays with fire by rhetorically tying contemporary voting issues to those dark days.

He has also coyly claimed that his concerns about voter ID laws are that they will place an undue burden on elderly, young, student, low-income, and minority voters. Yet most speeches given by Holder on this issue have been in front of largely black audiences.

Last December, he traveled to Austin, Texas, where he told an audience that voter ID laws harm racial minorities and that they are driven not by concerns about ballot integrity, but by racial animus.

Earlier this year, Holder cozied up to Al Sharpton at the annual convention of Sharpton’s National Action Network and praised him for “your partnership, your friendship, and your tireless efforts to speak out for the voiceless, to stand up for the powerless, and to shine a light on the problems we must solve and the promise we must fulfill.”

Holder’s next major salvo was in late May, when he addressed the Council of Black Churches. He pulled no punches, telling the black church leaders that their right to vote was under assault nationwide and claiming voter ID laws could keep minorities from casting ballots in the 2012 presidential election.

The absurdity of Holder’s arguments about the disproportionate unfairness of voter ID laws is revealed by this one fact: no one can enter Eric Holder’s Justice Department building in Washington, D.C., without presenting … a photo ID.

Luckily, most of us don’t often find ourselves trying to enter the Justice Department, but we do need to show a photo ID to get into almost any court or government building, as well as for all sorts of routine daily activities like making a bank deposit, buying a plane ticket or boarding a flight, checking into a hotel or motel, or buying an item with a credit card. Sensible people don’t believe they’ve faced discrimination when asked to produce ID in any of these circumstances. A polling place is perhaps one of the most important places to have you prove that you are who you say you are.

In order to limit voter fraud, nine states require a photo ID before voting and eighteen others allow a non-photo form of ID. Holder has used the Voting Rights Act to stop the implementation of voter ID requirements in Texas and South Carolina. Nonetheless, a Fox News opinion survey showed that 52 percent of Democrats, 87 percent of Republicans, and 78 percent of independents are in favor of voter ID laws.

While the Supreme Court upheld voter ID in a different context, Holder is on a crusade against it. In 2008 the Supreme Court ruled on Indiana’s voter ID law and a six-member majority upheld that state’s law, saying that Indiana’s law was not an undue burden under the Voting Rights Act and the Constitution.

Holder hasn’t acted alone. Other Democrats and Obama campaign surrogates have joined the attack. Among them is DNC Chair Debbie Wasserman Schultz.  In an interview with CNN’s Roland Martin, she argued that voter ID laws are an indication that Republicans want to drag the nation back to the days of Jim Crow laws. Democrat Congressman Jerrold Nadler said photo ID laws are a “deliberate plot by conservative Republicans to suppress votes.”

In one of the more outrageous moves last year, the NAACP delivered a petition to the United Nations seeking that organization’s help in investigating voting abuses in the United States. They argued that voter ID laws are a conscious effort to strip blacks and other minority groups of the right to vote.  This, like almost nothing else, showed how this once-proud civil rights group is completely irrelevant and long past its glory days.

The NAACP supported the dismissal of charges by Holder’s DOJ against two members of the New Black Panther party who stood outside a Philadelphia polling place in 2008 taunting white voters — with one wielding a nightstick. This case led to accusations that the DOJ under Obama and Holder is biased against white victims of voting rights abuses, preferring only to pursue cases involving black or other minority victims.

Much of this flap over voter ID laws might be easily dismissed if the people making claims about voter ID laws were outliers and kooky fringe activists.  However, in addition to well-known Democratic Party operatives and civil rights leaders, the key figure in this matter is the attorney general of the United States — the highest law enforcement official in the nation. Why is he lying to, scaring, and confusing black Americans about imaginary threats?

Although Holder’s views are mired deeply in leftist politics, he’s a sophisticated man who was once a leading attorney at a large and successful Washington, D.C., legal firm.  He must know his claim — that Republican racial animus lurks behind voter ID laws — is a lie.  This makes Holder’s cynicism all the more unforgivable.

(Photoshopped image of Holder and race card based on images from Shutterstock.com and Lindasog.com.)