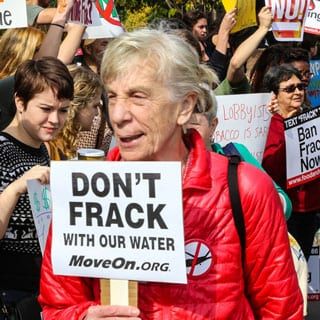 No country for young men.

Prior to each election cycle, one topic is sure to be raised in the debate for office seekers in every corner of the nation where energy exploration takes place. Where do you stand on fracking? Properly known as hydraulic fracturing, fracking is the liberal boogieman which is, according to environmental activists, responsible for everything from the rampant destruction of the wilderness to exploding sinks.

So popular is this allegedly common knowledge that The Daily Show’s Asif Mandvi did a “special report” on the subject this year. He highlighted the hazards posed to citizens residing near natural gas drilling rigs and lampooned industry experts who had the audacity to question the scientific accuracy of esteemed liberal studies on the subject such as the Matt Damon film, Promised Land.

As with most such displays of eco-warrior activism, a few pesky but pertinent details were left out of the Comedy Central analysis.  One of the chief accusations which was somewhat casually tossed into the report dealt with the commonly held belief on the Left that fluids used in the hydraulic fracturing process – along with the sought after natural gas itself – somehow migrate to the surface and contaminate the drinking water of those living nearby.  But do they?

No less of a Right Wing source than CBS News reported just last year that extensive studies in Pennsylvania had failed to provide proof of this allegation.  As part of an ongoing test, the drilling company agreed to inject unique chemical markers into their fracking fluid and allow the state Department of Energy to conduct regular tests of wells and ground water over a period of years to see if the markers were making their way to the surface. Not surprisingly, none were detected.

The fracking fluid is more than 98% water and sand, with the small remaining volume being a combination of chemicals used to free up the natural gas more easily. They are typically injected at depths greater than 8,000 feet under the ground, and to make it to the surface they would need to travel upwards in defiance of gravity, passing through several different geologic layers before reaching the aquifer above.  To date, studies have not indicated that this is happening.

But what of the Pennsylvania man who was able to set his tap water on fire in the fictional movie, Gasland? Surely that must mean something!

It does.  And to understand precisely what it signifies, we should take a brief detour to another location in the Keystone State.  The town of Centralia, or at least what remains of it, lies in the same geographic belt as the natural gas mining sites mentioned above.  If you go to Centralia you’ll find a ghost town, all but abandoned by man.  In various spots, steam and noxious gases rise from the ground with no obvious cause and the air is considered unfit for human habitation.

The reason for this strange, ghostly environment is that the town sat atop a coal mine. Back in the 1960’s, a fire started in one of the coal seams and the entire mine began to burn in a slow, smoldering fashion.  And as strange as it may sound, the fire is still burning today, more than 50 years later.

I mention this not as some indictment of the coal mining industry, but because it relates directly to the man with the flammable tap water. The central portion of Pennsylvania sits above one of the richest, deepest and most extensive supplies of fossil fuels in the nation, and in many spots these resources are very close to the surface. It’s the reason that some of the very first oil wells ever established in the United States were found in Pennsylvania.  If you drill down into the ground – sometimes only for a short distance – you’re going to hit fuel. People living in this area have been dealing with this issue for as long as the land has been inhabited… long before the invention of fracking.

The people with the flammable sinks do not have “city water” delivered by pipes. They drill wells and obtain their water right off their own land. And when you drill a well fifty or one hundred feet into the ground, you’re going to tap into some natural gas a majority of the time.  Several companies have done steady business in the area selling water filtration systems to remove the released gases for decades.

None of this, however, is allowed to penetrate the profitable storyline woven by environmental activists today. And in their efforts to shut down the flow of natural gas, they will hold the feet of politicians to the fire, asking them to continue bans on fracking such as are still in place in New York.  And with enough money flowing into campaign war chests, combined with a willingly gullible voter base, it will continue to work.

(Photo by A. Katz, Shutterstock.com.)

Jazz Shaw is a heretical, Northeastern former RINO and the weekend editor at HotAir.com He can be reached at [email protected] Or you can follow him on Twitter @JazzShaw
Read more by Jazz Shaw
SHOW COMMENTS