Reason is the fundamental element to keeping a republic viable. If the people lose their ability to reason, or their desire to reason, republicanism becomes obsolete. History has proven this over and over again.

Hence the reason John Adams said, “Liberty cannot be preserved without a general knowledge among the people.” Hence the challenge Benjamin Franklin gave Americans by stating they had given us a republic — if we could keep it.

The question today is if Americans really want to keep republicanism. Republicanism requires vigilance and passion, civic responsibility and reason.

Republicanism cannot be maintained by “letting other people do it.”

A good example is the story of the quarreling brothers. As the story goes, two young brothers were fighting over a peanut butter sandwich. Their mother stepped in and said, “Now boys, think about what Jesus would do. He would give his sandwich to the other.” The boys thought about this for a moment and then the older brother said to his sibling, “Ok, you be Jesus!”

Letting other people do all the work while enjoying the fruits of the labor is represented in many ways other than “spreading the wealth around.” Often in our republic people want to “spread the civic work away” – from them. Many people do not want to “get involved” in the responsibility of maintaining our republic.

This may manifest in an avid passion to destroy republicanism because they believe that flatlining life and lives is the answer, or it may manifest in the opposite way, which is seemingly innocent but just as destructive — by being politically correct.

The ideology of flatlining and the submission to political correctness both defy reason and reason is fundamental. The irony is that the left, with its desire to flatline life, and the right, with its desire to be quietly conservative and politically correct, are colliding in a ruin of republicanism.

Case in point — the question of where President Obama was born. This question is permeating the web in a radical way with the emergence of Obama’s former author bio, which states he was “born in Kenya.” This bio was a part of Obama’s persona until he began to run for president in 2007. 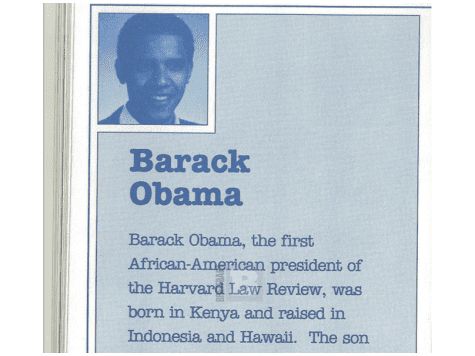 Yet, according to the left, anyone who is curious about the “Kenyan born” revelation is a racist. Meanwhile, the right, riddled with fear of being called  racist, is clamming up with political correctness.  Where is the reason in either approach? There isn’t any.

Obama manipulates the racist card often by stating that it is hard to get elected with a name like “Barack Hussein Obama.” What does that type of comment imply? It implies that most Americans are racist. He stabs the arrow deeper into the American heart he promised to heal.

Yet the law of the land, the United States Constitution, is very clear that the president of the United States should be American born. If this were a legal case in court, the book bio stating that Obama was “born in Kenya” would be taken into consideration. Yet if the American people question why a document would say something like this, suddenly they are racist, birthers, ignorant, or not being politically correct.

Political correctness is the subversive tool of the enemy — that is already in the field.

It is reasonable to wonder why Obama’s bio would say such a thing. I am an author. Book agents always submit pitches and bios to me for approval before they are distributed. If my bio were to state that I was born in another country such as France, I would most certainly correct the bio to state that I was born in America. Thus, it is reasonable to question why a Harvard-educated man, who was and is meticulous in detail regarding his persona, would allow his bio to say he was “born in Kenya.”

It is reasonable to question such a document, but where is reason?

The bio stating Obama was “born in Kenya” can be one of the following:

b)     Fabricated by Obama to create a mystique about himself

Reason sounds an alarm about President Obama on all three accounts:

a)     If it is correct, then our president is unconstitutionally elected.

Could it be that no one really wants to deal with this because it would be too difficult? If we become a nation that allows the precedent of breaking such a fundamental constitutional law, then our republic is surely doomed.

b)     If it was fabricated, then we have a president who is elusive and dishonest.

Could it be that no one wants to deal with the fact our president fabricated his image with a lie; that he is mercurial? If “we the people” are too politically correct to investigate and highlight such traits, then our republic is surely doomed.

c)      If it was simply a typo, then we have a president who is merely a front man.
Could it be that Obama is not willing to pay heed to the details of governing his own life? Then how can he pay heed to governing our country’s details? Could it be that Obama is just a front man who really has no desire to govern or deal with the “details” that a republic so desperately needs such as budgets and constitutional laws?

It is reasonable to question a bio of Obama that stated he was “born in Kenya.” It is unreasonable to not question it. The left is berating people who dare to consider the mystery of the bio, and the right is ignoring the implications of it in the name of political correctness or perhaps because it would just be too messy to unravel the truth.

Janine Turner is a longtime actress and a talk radio show host. She appears regularly on Friday editions of Fox News' The O'Reilly Factor.
Read more by Janine Turner