Deadly Delusions: A Review of Radicals: Portraits of a Destructive Passion by David Horowitz 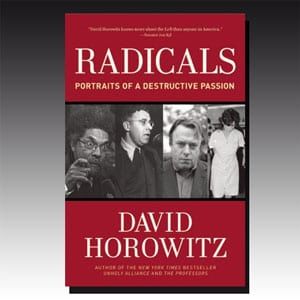 In the work of David Horowitz, personal history and political analysis are often conjoined. Horowitz’s memoir Radical Son told how as a Marxist intellectual and activist, he came to reject the revolutionary violence of progressivist ideology along with the utopian longings and commitments that inspired it. In works such as Destructive Generation: Second Thoughts About the Sixties (with Peter Collier) and Left Illusions, he exposed with first-hand passion the self-deceptions and cultural chaos generated by such utopian faiths. A significant segment of his work, including The Professors: The 101 Most Dangerous Academics in America and Indoctrination U: The Left’s War Against Academic Freedom, has investigated the corruption of American universities by radical politics; and even here, there is a personal element as he remembers the scrupulous professors, models of disinterested intellectual engagement, who taught him as an undergraduate at Columbia. His recent A Point in Time: The Search for Redemption in This Life and the Next is exemplary in its blending of personal and broadly philosophical discussion of the spiritual roots of totalitarianism.

Radicals: Portraits of a Destructive Passion continues this work of political reflection sharpened by autobiographical insight. It collects portraits of contemporary left-wing intellectuals, writers, and activists, all but one of whom embraced anti-American propaganda and its justification of violence, including journalist Christopher Hitchens, who worked for years at the rabidly anti-American paper The Nation, feted academic Cornell West, who has fawningly promoted the murderous Nation of Islam, and Saul Alinsky, who has embraced nihilistic destruction in the name of “the people.”

Each chapter focuses on the manner in which intelligent people accommodate the evident contradictions and brutal repressions of the ideologies to which they profess allegiance, and the personal deformations, moral compromises, and unacknowledged trauma that such allegiances often exacerbate. Red-diaper baby Bettina Aptheker, for example, endured bouts of self-hatred and Communist-inspired paranoia that never led to any thoroughgoing repudiation of the extreme causes to which she dedicated her life, and she has remained publicly unrepentant about her defense of Black Panther murders and other far-left atrocities. Becoming a radical feminist professor at UC Santa Cruz, she built a comfortable life preaching the moral equivalency between the United States and the totalitarian foes that seek its destruction. Professor Cornel West is also a successful far-left and anti-American academic, living well off books and talks that vent grievance-filled rage and obscene encomia to murderers. He has been able to elide the fact that the Nation of Islam executed his hero Malcolm X, such repression allowing him to declare his solidarity with “the fiery passion for racial justice and deep love for black people” of its leader Louis Farrakhan, who orchestrated the murder. The intensity of his hatred for white America leaves him unable to see anything good in his country or anything bad in his black brethren.

The degree of intimacy in the portraits varies, depending on the subject’s own capacity for honest self-reflection. One has little sense of psychological complexity in West’s glib self-aggrandizement, perhaps because there is none to be found or because he is someone for whom Horowitz has little personal knowledge and sympathy. More personally revealing is the portrait of Susan Lydon, product of the hippy counterculture who became famous for a widely cited feminist essay called “The Politics of Orgasm.” Lydon wrote a confessional account of her decades-long struggle with addiction and self-hatred, a struggle that led her far away from the self-destructive radicalism of her youth. Hers is the story of an individual who turned away from a damaging mindset and ultimately found some measure of personal peace.

As its title suggests, however, this is mainly a book about people who maintained their radical faith, recasting reality to fit their beliefs. Horowitz recounts attending a film and talk at a Santa Monica bookstore by released convict Linda Evans, of the Weather Underground, who had served less than half of a forty-year sentence for possession of explosives and terrorist organizing. Now she was attempting to generate sympathy for fellow criminals still in jail who needed public support. Horowitz is fascinated by the sanitized account she provided of the reasons for her allies’ incarceration as well as the warped vision that led her to label as “political prisoners” every person behind bars in America. How can one go on believing, in the midst of so much deliberate and often pointless violence (associates of Evans killed a young black police officer during a botched Brinks robbery), in the righteousness of one’s cause and the innocence of one’s fellow killers? As Horowitz shows, the remarkable upside-down logic is endemic to the hard left, in which nearly any level of violence is justifiable so long as it seeks to destabilize an evil America, seen as unparalleled in its malignancy.

Horowitz’s chapter on “Pardoned Bombers,” about Evans, Kathy Boudin, and Susan Rosenberg, all Weather Underground alumni, is a gripping story of violence, decades-long unrepentance on the part of the trio, and the collusion of journalists, politicians, left-wing do-gooders, and members of the intelligentsia such as Noam Chomsky to whitewash their crimes and massage public opinion. The three women, who sought for years to bring about so-called racial justice through bombing campaigns and armed struggle, continue to proclaim the rightness of their aims. Horowitz’s detailed analysis of Rosenberg’s self-pitying book An American Radical: A Political Prisoner in My Own Country details its failures of empathy and outright lies in a way the mainstream media, unaware of or unconcerned about the truth, has never done.

The final chapter of Radicals provides a detailed close reading of the political theory of Saul Alinsky, a man who idolized Al Capone, Fidel Castro, and rebel angel Lucifer, and who dedicated himself wholeheartedly to destroying his country. Horowitz’s reading shows clearly that the radical’s commitment to an unrealizable higher purpose — the earthly salvation of mankind — not only excuses but also mandates disregard for law and personal morality. Alinsky’s hatred of law-abiding liberals stemmed from the fact, as he stated, that they allowed conscience and principles, neither of which he believed in, to limit their work for fundamental change: “They do not ‘care enough’ for people to be ‘corrupted’ for them,” he charged, putting “corrupted” in quotation marks to show that he didn’t believe in such a scruple. Convinced that the overthrow of the American order was an end that justified any means, he advocated the infiltration of the Democratic Party by closet revolutionaries to radicalize it from within. That Barack Obama spent years working with Alinskyites in Chicago and even teaching Alinskyan methods during his tenure as a community organizer highlights the degree to which an anti-American radicalism is now inside the White House. This chapter is essential reading for anyone who wonders why Obama’s activist connections matter to the future of America.

The book’s tour de force is undoubtedly the chapter on “The Two Christophers,” an in-depth analysis of Christopher Hitchens’s memoir Hitch-22, interleaved with memories of Horowitz’s personal relationship with him. The reading is masterly in teasing out the blind-spots, half-truths, and evasions that fill this account by a one-time Marxist radical who was able to go only so far in repudiating his leftist dreams. In a superb reading designed to show that “Loyalty to bad commitments leads to moral incoherence,” Horowitz pores over the memoir to find both the overt contradictions of Hitchens’ self-congratulation — his pleasure in having marched in opposition to the Vietnam War, his hatred of Israel and Ronald Reagan, his love for defenders of totalitarianism — and also those moments in the text where the confessing self, in detailing his formative influences, crises, and political sea-changes, reveals more than he intends. Such moments come in verbal evasions, especially a crippling refusal to examine the human misery caused by the causes he supported and to explore the psychological roots of his residual salvationist fervor.

One is struck through this book by the depth and human forthrightness of Horowitz as man and as political commentator. Always incisive, elegant, and wise, his penetrating analyses of the perils of radicalism are tempered by sadness as much as anger, and leavened by the cautious belief — bedrock of all his writing — that human beings can rethink misguided commitments in the light of evidence and reasoned argument. Though exasperatedly impressed by the fact of “how little we human beings are able to learn collectively from our experience, how slowly we do learn, and how quickly we forget,” he has kept on writing in the tempered hope that readers’ nascent second thoughts can grow into a principled refusal of violence.