The 2011 Inaugural Ferrari Challenge at Infineon Raceway in Sonoma

Several years ago, when photo editing the automotive community section for a photo sharing website, a manager at a local track asked if I’d be shooting the Ferrari Challenge, as it seemed a good fit for our site. I jumped at the chance. Readers love Ferraris, and maybe, just maybe, I would get a chance to get a few shots of a driver working the track from inside the car, as these races are with production vehicles with passenger seats. That first event was memorable for more than just the racing and the popularity of the shots. It also marked my first time around the track in the 12-cylinder 599 GTB Fiorano:

Don’t be fooled by the dewy skin and beguiling smile – this is pure supercar.

My quest for the 2011 event was clear: Get the shots, get the story, and get a ride in the 599XX — the blistering fast, Nürburgring dominating variant of the GTB. The editor’s specific request: “Bring a flip cam.” 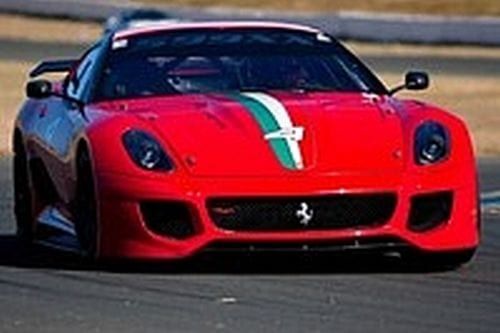 The Ferrari Challenge is the longest running event of its kind in North America, and while it may not enjoy the sort of ubiquity in the U.S. as NASCAR or IndyCar, it’s arguably more true to the original spirit of NASCAR than one might think in that the Challenge cars must not only begin life as production cars, they are required to run production engines, in production tune. The only changes permitted are the addition of safety equipment, slick tires, and some tweaks to the clutch and suspension. The car on the showroom floor is the car on the track.

In addition to the Challenge race itself, there are several other events which complete the weekend’s festivities, depending on the venue. There are the “Clienti” events, where Ferrari makes their championship F1 cars, the incredible FXX, or the aforementioned 599XX cars available to very qualified civilian candidates. Also, there’s the Shell Historic series, featuring some of the most legendary marques in Italian motorsport. And perhaps the most exciting event for Ferrari owners — the Sporting Class, where drivers can put on their helmets and run their street cars against fellow owners on the track for bragging rights and a rare opportunity to experience their cars at their full potential.

The incredible 458 debuts in race trim in the 2011 series; the FXX and the Sporting Class impressed drivers and spectators alike.

Ferrari’s 2011 season kicked off at Sonoma, California’s Infineon Raceway. Six more events will follow, including such storied tracks as Laguna Seca in Monterey, CA, and Lime Rock Park in Lakeville, CT.  Scott Tucker of Kansas won the inaugural race of 2011. He looked poised to be a spoiler in Sunday’s race two as well, but an off in qualifying found him starting from last in the field. Remarkably, Tucker made it into the top ten in race two with a car his team had only three hours to rebuild. Enzo Potoliccio was the pole sitter for both days and the winner of Sunday’s race two.

As for my assignment to bring a flip cam on a ride-along; it didn’t happen. It was opening weekend for the series, and there were many sponsors and silent heroes to thank. Perhaps at Laguna, I was reassured. That was all I needed to hear. Please watch for the next report from the second event in the series, and perhaps that video as well!