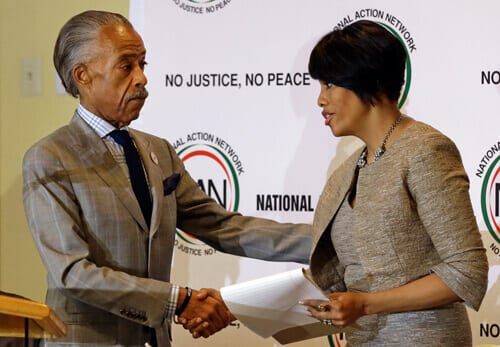 NBC’s Al Sharpton shakes hands with Baltimore Mayor Stephanie Rawlings-Blake as she prepares to speak at a summit to address issues surrounding the death of Freddie Gray and its aftermath at New Shiloh Baptist Church on April 30 in Baltimore. Note the “No Justice, No Peace” slogan behind them. (AP Photo/Patrick Semansky)

The slaughter in Baltimore continues apace.  So much so, in fact, that people reading the Baltimore Sun each morning check the latest homicide totals as they would the Orioles’ box score.  “Did you see the O’s dropped another one to Houston?” someone might ask a friend.  “Yeah,” comes the reply, “and two guys got dropped over at Lafayette and Monroe.”

The month of May closed with 43 homicides in Baltimore, the highest monthly total since 45 people were killed in August 1972, a time when the city had 200,000 more residents.  And it took less than a half-hour before the city recorded its first homicide victim in June.  Another would fall less than two hours later.  As of this writing, 119 people have been killed in Baltimore this year, and the number will surely be higher by the time you read this.

As grim as these numbers are, more discouraging still is the reaction to them displayed by those whose job it is to do something about the problem.  The Baltimore Sun reported Tuesday on Police Commissioner Anthony Batts’s appearance at a city council Public Safety Committee meeting, where he attempted to place at least some blame for the sudden outbreak in violence on a new deployment system in which officers work four 10-hour days each week rather than five 8-hour days as before.  The new system was implemented in January.   “We had some hiccups at the midnight shift,” Batts said, “when we should have had more officers out there.”

If these deployment “hiccups” are indeed a factor in Baltimore’s troubles, one would expect their impact to be greatest at the outset of the new system.  But the city saw 23 homicides in January, then 13 in February, and 15 in March.  April saw 22 homicides, which may seem like a significant increase until you compare it to the carnage that followed in May.  So, no, Commissioner Batts, it’s not the 4-10 schedule.  You could put twice the number of cops out there on the midnight shift, or for that matter ten times the number, but if those cops aren’t motivated to do the things necessary to restrain the murderous impulses apparently harbored by so many people in Baltimore, you’d see the bodies stacking up in the morgue just as quickly.

For anyone mystified as to what underlies all this bloodshed, the Baltimore Sun has published some helpful graphics that put the crime numbers in perspective.  It seems that as the number of arrests made by Baltimore officers has decreased, the number of violent incidents in the city has increased.  Who would have dared to imagine that?

Not Baltimore Mayor Stephanie Rawlings-Blake, apparently.  She told the Sun there were “a lot of reasons” for the rising crime, and that she and Commissioner Batts were “examining” whether the decline in arrests was a factor.  One must of course accept the fact that politicians are often in situations in which they have no choice but to lie or say stupid things.  This is not one of those situations.

Mayor Rawlings-Blake today oversees a city where the anti-police movement has reached full fruition, with the results being exactly as one should have expected.  Beginning with last year’s police shooting of Michael Brown in Ferguson, Mo., the movement has peddled the poisonous lie that the greatest danger to America’s young black men is being gunned down by a police officer for little reason or none at all.  Despite the fact that the Michael Brown shooting was found to be justified by local and federal investigators, it nonetheless served as a call to action for the nation’s grievance mongers, two of whom, sadly for Baltimore, hold elective office in that city.

The mayor, for all her manifest vapidity, is a towering intellect when compared to the Baltimore state’s attorney, Marilyn Mosby, who rushed to charge six Baltimore police officers in the death of Freddie Gray.  Appearing at a ceremony at which a street was named after McKenzie Elliot, who at age 3 was shot and killed last year, Mrs. Mosby utilized the same type of language and theatrical outrage she did when she announced the charges against the six officers last month.  “It’s going to take us as a community,” she said, “to recognize that there is [sic] more of us than there are of them and to step forward.  Our time to do it is now.”

Mrs. Mosby’s latest misstep was to (laughably) claim her personal Twitter account had been hacked when it came to light that she had “favorited” two tweets related to the Freddie Gray case.  One tweet referred to the six accused officers as “thugs,” the other praised her handling of the matter and said she “INFURIATES a certain kind of white person.”

The case against the officers is no more credible than the claim the Twitter account was hacked.  When the case collapses — as it will — it will be she who will bear much of the blame for the riots that follow — as they will.

But before that happens there will be much attention focused on Baltimore, little of it for anything uplifting.  Witness the controversy surrounding the alleged “special treatment” given to three of the six accused officers.  The Sun reported on May 28 that the three officers, Caesar Goodson Jr., William Porter and Edward Nero, were not handcuffed when they were seen exiting a police van at a Baltimore jail.  Adding to the outrage was the fact that one of them was “greeted with a hug” by an officer at the jail.  Horrors!  Perhaps Mrs. Mosby will find something to charge the offending hugger with as well.

As documented by Heather Mac Donald in the May 29 Wall Street Journal (subscription may be required), the effects of the anti-police fervor sweeping the nation are being felt most strongly in Baltimore, but cops everywhere are paying attention and responding accordingly.  Which is to say they are being circumspect in their enforcement efforts so as to minimize the chance of finding themselves in the same situation as the Baltimore Six.  “We all know we’re just one critical incident away from having our lives ruined,” a Los Angeles police officer told me this week.  “All it takes is one YouTube video and you’re done.  Why risk it?”

Why indeed?  I’m betting Baltimore will see 50 homicides before June comes to an end, and similar numbers all through the long, hot summer.  Anyone think I’m wrong?