Could Loretta Lynch Be a Worse Attorney General than Eric Holder? 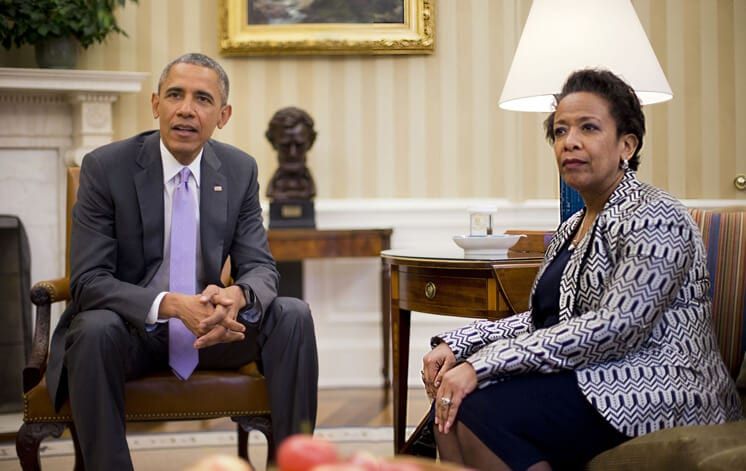 Last Thursday, the day Loretta Lynch was (lamentably) confirmed by the Senate as the new attorney general, the Los Angeles Times speculated on the relationships she might come to have with the various entities in American law enforcement, and whether she would inherit the “baggage” left by her predecessor, Eric Holder.  The Times quoted James Cole, who until recently was a deputy attorney general under Holder.  “She is in a good position,” he said, “because she has earned credibility with the law enforcement community to begin with.”

This is the sort of thing one would expect to hear from a Holder underling: a non-committal, vaguely optimistic assertion that everything will be just swell under Ms. Lynch because she has “credibility.”  No doubt Mr. Cole feels Eric Holder has credibility too, this despite his manifest lack of it.

For America’s police officers, there is little to celebrate in Ms. Lynch’s installation at the Justice Department save for the fact that it accompanies Eric Holder’s exit.  Things couldn’t possibly get any worse, it would seem.  But then, this is the Obama administration we’re talking about, so perhaps I shouldn’t make such a bold assertion.  It would be naïve to think that Ms. Lynch is any less committed to the president’s agenda than Mr. Holder was.  If she were, she wouldn’t have been considered for the post in the first place.  For the next two years or so, things can indeed get worse and, now that I’ve thought about it for a moment, probably will.

One of the advantages of growing older is gaining a better perspective on the swings of the societal pendulum.  When I became a police officer in the early 1980s, crime in America was on the upswing, reaching its zenith in the early ‘90s.  In Los Angeles, for example, the number of violent crimes reported to police in 1979 was 43,644.  By 1992 the number had more than doubled to 88,911.  In most cities across the country you would find a similar trend over the same period.

The crime wave brought calls for legislative action such as “three-strikes” laws that sought to punish criminal behavior more severely.  This in turn brought about lower crime rates, but at the cost of crowded and often dysfunctional prisons.  And now, with crime at what is widely perceived to be tolerable levels, laws are being enacted to ease some of the punishments so widely demanded just 20 years ago.  In California, the passage of Proposition 47 and AB 109 (discussed in a previous column here) have allowed thousands of convicted felons to be turned loose on their unsuspecting and unprepared neighbors.

And now the pendulum, having achieved the height of its arc, begins its reversal.  Los Angeles, the state’s largest city and therefore home to the greater share of its criminals, has seen violent crime increase by 28 percent over last year.  Robberies in the city are up by 19 percent, and aggravated assaults are up by 39 percent.  “And what are the cops going to do about it?” the people ask.  LAPD Chief Charlie Beck has vowed to address this increase by doubling the size of the elite Metropolitan Division, whose officers are deployed to those parts of the city where crime is highest.

But here’s the rub: deploying these extra cops to areas with lots of crime — and expecting them to do something about it — will of course bring them into contact with the people committing the crimes, and some of those contacts will turn violent.  And most of these criminals — trigger warning: frank discussion of race and crime ahead! — are black and Hispanic.  In 2014, over half of the murders in Los Angeles were committed in the four patrol divisions that cover the heavily black and Hispanic neighborhoods of South Los Angeles, an area whose population is only 17 percent of the city’s as a whole.

To its credit, the L.A. Times continues to publish its Homicide Report, which provides at least some details of every homicide committed in Los Angeles County, of which there have been 508 in the last 12 months.  Included in these details is the racial breakdown of the crimes, which are inconvenient for (and therefore ignored by) the Black Lives Matter movement. Forty-one percent of the victims have been black, 43 percent have been Hispanic, 13 percent have been white, and 3 percent have been Asian.  As homicide is almost entirely intra-racial, we may conclude that the perpetrators of these crimes break down along the same lines.  But looking at the county’s population, we see that it’s 71 percent white (which for the Census Bureau’s purposes includes the 48 percent who identify as Hispanic), 15 percent Asian, and 9 percent black, demonstrating that some ethnic groups are killing each other at a far greater rate than others.  Black lives matter, but only those taken by police officers.

This is not news, not in the literal sense and not in the sense that it’s deemed newsworthy by the local media.  Indeed, but for the modest attention given in the Homicide Report, few of these crimes have received any media attention at all.  These are facts not likely to be discussed at the Justice Department under Loretta Lynch, or under anyone else, for that matter, Democrat or Republican.

But facts are stubborn things, as they say, and police officers are asked to go out on the streets and confront them.  And when they do, people sometimes get hurt.  If that person happens to be black, no stone is left unturned in the effort to investigate the involved police officers and see them punished for even the slightest deviation from policy, even if that deviation exists only in the imagination of those who are so deluded as to think that the grittier areas of Los Angeles (or St. Louis or Chicago or Baltimore or any other city you could name) would be Edenic if it weren’t for all those cruel, racist cops running around.

This is not to say that police officers should not be held accountable for their transgressions.  Michael Slager, the former North Charleston police officer who earlier this month killed Walter Scott by shooting him in the back, has been charged with murder.  And while so severe a charge may turn out to be excessive, I have yet to meet a fellow cop who doesn’t feel Slager deserves to be punished for what, based on what we know today, appears to be a flagrant violation of the law.

But police officers know they need not violate any laws or even any department policies to find themselves in the dock with their lives in ruins.  Witness the fate of Darren Wilson, the former Ferguson, Mo., police officer who last August shot and killed Michael Brown.  Wilson was cleared of wrongdoing by every investigative body that examined the case, including a local grand jury and Eric Holder’s own Justice Department.  Nearly all of the evidence that exonerated Wilson was known within hours of the shooting, and most of the rest of it was known within a week, yet he still was forced to resign from his job, leave his home, and live in hiding while the poisonous Hands Up, Don’t Shoot myth was propagated 24 hours a day, seven days a week, for months.

Every cop America has Darren Wilson somewhere in the back of his mind as he heads out of the station to begin his work shift every day.  And every cop knows that when he goes to stop someone whose behavior has attracted his attention, the guy might run or he might fight, either of which presents at least as great a risk to the cop as it does to the criminal.  Why take that chance?  Why not just drive on?  It should come as no surprise that in Los Angeles, arrests for violent crime are down 13 percent even as violent crime itself is up 28 percent.

Eric Holder wasn’t able claim Darren Wilson’s scalp in the death of Michael Brown.  One could almost sense Holder’s disappointment in having to issue the DOJ report (PDF) that cleared Wilson, but he satisfied himself with the hit piece (PDF) his Civil Rights Division did on the Ferguson Police Department, which was released (coincidentally, I’m sure) the same day.

Is there anyone who believes that Loretta Lynch will be any less calculating in her stewardship of the Justice Department?