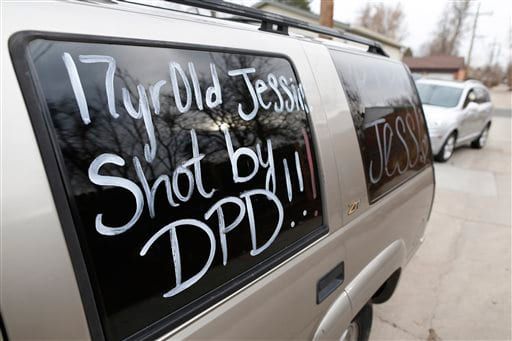 Gentle readers, we’ll get to the main topic in a moment, but first join me in a brief digression, a look behind the curtain and into the inner workings here at PJ Media.  On occasion, my intrepid editor will come across a news story that suggests you would be informed and entertained by my take on the events described.  He sends me a link to the story, I write the piece, and we both sit back and gauge your reaction in the hope that you are as informed and entertained as we would wish.

At other times, it is I who sees a news story and sends the intrepid editor the link, most often accompanied by the simple question, “Dunphy material?”  In due course he responds with a simple, “Yes, please.”  Such was the case when I came upon a story in the Feb. 4 edition of the Los Angeles Times.  The headline read, “Outrage follows Denver police shooting of Latina in stolen car.”  Well, to a cop who dabbles in opinion writing, this was like a batter eyeing a curve ball that didn’t break.  One scarcely had to read beyond that headline to know that what followed would surely provide rich fodder for a piece that would inform and entertain you, the discerning reader.

I emailed the link.  “Dunphy material?”

And came the response: “Yes, please.”

Obligations to the family and the day job are such that I write most of my pieces on the weekends, and it was with this plan in mind that I set off Friday evening for a monthly gathering of Los Angeles-area writers and entertainment professionals, most but not all of whom occupy the right side of the political spectrum.  The gathering has lately been organized by my friend and fellow contributor Michael Walsh.  Or perhaps he is better described as my former friend, for reasons which will soon become apparent.

“What are you working on?” asked a fellow writer upon my arrival, a common question we put to each other in the evening’s early stages.

“Well,” I said, “there was a story in the L.A. Times about a police shooting in Denver.  I’m working on something about it for PJ Media.”

At which point another of our members asked, “Did you see Mike Walsh’s piece on PJ Media today?”

But now I have.  Leaving aside the treachery of a supposed friend who would steal a topic he should by all rights have known was mine, he had the further crust to write his piece in a way that was far more informative and entertaining than anything I could have produced.  So much for friendship.  (Mr. Walsh is spending some time in Ireland these days.  Working on some writing projects, he claims, but I can’t rid myself of the suspicion he’s dodging a subpoena.)

I’ll settle scores with Mr. Walsh upon his return (if he dares), but petty rivalries aside, I recommend you read his piece for the dissection he offers of the classic example of grievance journalism that is the L.A. Times story on the death Jessica Hernandez.

Hernandez, 17, was shot to death on Jan. 17 by Denver police officers who found her at the wheel of a stolen Honda.  Police say Hernandez attempted to run over officers in attempt to escape.  Four other teenage girls were in the car at the time of the shooting, none of whom was injured.  One officer suffered a fractured leg in the incident, though accounts vary as to exactly when and how he sustained the injury.

We can of course agree that Hernandez’s death was unfortunate.  The violent death of someone so young is shocking under any circumstances.  It is especially so when it could so easily have been avoided.  This is not to suggest the police should have avoided shooting her, but rather that she should have surrendered when she was first stopped in the stolen car.  (Or, here’s a thought: maybe she shouldn’t have stolen the car in the first place.)  Like Michael Brown in Ferguson, like Eric Garner in Staten Island, like nearly everyone who dies at the hands of the police, Hernandez would be alive today if she had but given up when she was caught in the wrong.  But in America today it is only the actions of the police that are endlessly criticized; to judge the offender’s behavior is beyond the pale.  Indeed, as a so-called “youth organizer” quoted in the L.A. Times says, stealing cars is merely a “rite of passage for many teens.”

But I’ll leave the discussion of such leftist bilge to Mr. Walsh (curse him).  It remains for me to address the tactical and legal questions of the Denver shooting, both of which favor the officers.  First we’ll address the tactics.  The L.A. Times quoted two law enforcement experts who say shooting at a car’s driver is ill-advised, given the unintended consequences that may follow.  A moving car is hard to hit, the driver inside even more so.  Rounds can go astray and hit innocent bystanders or other police officers, and even if a round strikes the driver, it may not stop the movement of the car.

One of those experts, Geoffrey Alpert, professor of criminal justice at the University of South Carolina, told the Times, “Most progressive police departments in this country and around the world prohibit [shooting at moving cars], with the very small caveat of saying you can do it if you are trapped.”

All of which is true, but in the Hernandez shooting none of these unintended consequences occurred.  Of the five occupants of the Honda, only the driver was struck by gunfire, proving that the officers’ aim was true.  And though the stolen Honda crashed after the shooting, it happened at a sufficiently low speed that there were no injuries to Hernandez’s companions.

Professor Alpert’s description of the policy changes implemented at “most progressive police departments” omits one factor that, while almost never spoken of, contributed greatly to those changes, to wit, that the people most likely to run from the police, whether in a stolen car or for other reasons, are blacks and Hispanics.  And when blacks and Hispanics are shot by police officers, especially by white ones, great effort is made to find fault with the officers.

Such was the case in Los Angeles back in 2005, when Devin Brown, a13-year-old black boy driving a stolen car, was shot and killed by an LAPD officer.  As happened in the Hernandez shooting, Brown either tried to run down a police officer or was indifferent to the possibility he might do so in his attempted getaway.  The LAPD soon changed its policy on shooting at moving cars, all but eliminating the practice, and the involved officer went through a years-long ordeal before he was finally cleared of wrongdoing.  A similar ordeal surely awaits the Denver officers who shot Hernandez.

But all of that is politics, which has a way of creeping into police work and forcing officers to make political calculations when they should be making tactical ones.  The law has been clear for some years that officers may use deadly force to end a dangerous car chase, and it was made even more clear last year when the U.S. Supreme Court handed down its decision in Plumhoff v. Rickard (PDF), which held that officers had not acted unlawfully when they fired multiple shots at a car they had been pursuing at high speed.  Both the driver and passenger were killed.  In a unanimous ruling, the Court held that

In light of the circumstances we have discussed, it is beyond serious dispute that Rickard’s flight posed a grave public safety risk, and here, as in Scott, the police acted reasonably in using deadly force to end that risk.

Though it is true that Hernandez had not engaged the officers in a prolonged high-speed pursuit, thus distinguishing her case from Plumhoff, the fact remains that she showed reckless disregard for the safety of the officers trying to arrest her.  Had she not been stopped as she was, a high-speed chase, with all its attendant risks to the public, surely would have ensued.  Had she instead driven away only to crash later, injuring or killing one or more of her passengers or some innocent party, there would have been howls of protest about how the police should have stopped her sooner.

We will soon witness the effort to see Jessica Hernandez installed into the Left’s pantheon of heroes alongside recent inductees Michael Brown and Eric Garner, and figures of long standing like Mumia Abu Jamal and Tookie Williams.  Children in Denver yet unborn will perhaps one day attend an elementary school named in her honor.  Yes, it’s unfortunate that she died, but the fault for her death is hers alone.