The Economist Versus SWAT

On Monday morning, two LAPD officers responded to a reported incident of domestic violence in the Hollywood Hills, a neighborhood where violent crime is all but unheard of.  Radio calls of this nature can be harrowing, but as the officers approached the house there was nothing to indicate that this one was especially so.  Until the shooting started.

Once at the doorway the officers were met with gunfire, which wounded one of them.  They returned fire with uncertain results and held their ground until help arrived.  With the wounded officer removed to safety, additional officers surrounded the house and attempted to communicate with the gunman.  When repeated efforts to talk to the suspect went unanswered, a SWAT team was called in, and when they entered the house they found the man dead from a gunshot wound.  As of this writing it has not been determined if the suspect killed himself or was killed in the initial exchange of gunfire.

Few would argue that use of a SWAT team in these circumstances was unwarranted.  Here you had a suspect who had already shot at two officers, wounding one of them.  He was believed to be barricaded in the home with access to unknown numbers and types of firearms and ammunition.  The first officers to answer the domestic violence call, with no indication of what awaited them beyond the threshold, approached the door with their semiautomatic handguns holstered.  Their pump-action shotgun would have remained in their car, as would have the semiautomatic rifle that some officers are trained to use.  The patrol officers who responded after the gunfire would have been similarly armed.  And while the first officers taking up positions outside the house would have been wearing Kevlar helmets, their concealable body armor would have been viewed as insufficient for the task of engaging and arresting a suspect whose willingness to kill had already been demonstrated.  Furthermore, the officer-needs-help call was answered by officers from several police stations, few if any of whom had ever had the opportunity to train as a coordinated unit. 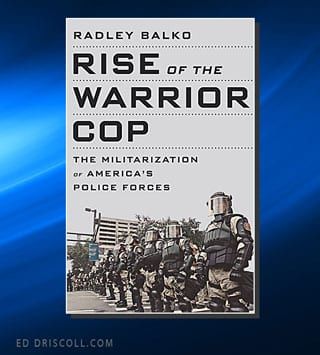 It is situations like this one that SWAT teams were created for, and in fact the LAPD was an early innovator of the concept — the department’s SWAT team was established in 1967.  But today some say that police SWAT teams and the paramilitary hardware they employ have become too widely used.  An article in the March 22 edition of The Economist makes this argument, and it is one that cannot be dismissed out of hand.  The article, “Cops or soldiers?” opens with an account of a police raid in Ankeny, Iowa.  “From the way police entered the house,” it begins, “helmeted and masked, guns drawn and shields in front, knocking down the door with a battering ram and rushing inside — you might think they were raiding a den of armed criminals.  In fact they were looking for $1,000-worth of clothes and electronics allegedly bought with a stolen credit card.  They found none of these things, but arrested two people in the house on unrelated charges.”  And the piece goes on to describe how tragedy was narrowly avoided: The homeowner’s son, “a disabled ex-serviceman,” reached for his gun on hearing the intruders, but secured it on realizing they were police officers.

As anecdotes go, this one is unpersuasive in the campaign against the proliferation of SWAT teams.  Yes, the crime involved here was relatively minor and non-violent, but as the article discloses, one of the suspects arrested had three assault charges on his record and was found with a knife.  If writer Jon Fasman’s intent was to portray the police tactics employed in the raid as overkill, he fell short of the mark.  Sometimes an overwhelming show of force is the best way to avoid using it.

Which is not to undermine the premise of the article.  In the August 16, 2013 issue of National Review, I reviewed Radley Balko’s Rise of the Warrior Cop: The Militarization of America’s Police Forces. (My review is online behind the NR paywall, alas.)  Balko is an outspoken libertarian whose opposition to the “war on drugs” is made clear throughout the book.  I’ve been a minor player in this so-called war for more than 30 years now, so the reader should weigh my opinions with this in mind.  That said, I was struck at how much I found to agree with in Balko’s book, and in the article in The Economist.

Some years ago I participated in a large-scale operation that targeted a particular street gang in South Los Angeles.  In addition to the LAPD, the FBI, ATF, and DEA were involved, and when it came time to serve the many search and arrest warrants on the wanted suspects’ homes, the locations were divided up among the various agencies.  When I arrived at the command post prior to sunrise on warrant day, I was amazed at the array of armored vehicles the feds had assembled for the day’s task.  Some of them were enormous, and most were painted in the military-style scheme that reflected their desert war heritage.  As both Balko and Fasman point out, since the 9/11 attacks and the onset of the War on Terror, federal and local law enforcement agencies have received great quantities of military surplus equipment, and on this particular morning the feds saw fit to put some of it to use, no matter how unnecessarily.

Further, the federal agents who manned these vehicles, unlike their blue-uniformed counterparts from the LAPD, were wearing tan, military-style uniforms more suited to a battlefield than to a police operation in the middle of America’s second-largest city.  I point this out not to impugn the federal agents who participated in the operation that morning, but merely to illustrate what both Balko in his book and Fasman in his article describe as “mission creep.”  Fasman cites Peter Kraska, professor at Eastern Kentucky University’s School of Justice Studies, who estimates that in 1980, SWAT teams were deployed about 3,000 times across America but are now used 50,000 times a year, many of them in circumstances that would not appear to demand heavy firepower.  The cities of Baltimore and Dallas, Fasman writes, have used SWAT teams to break up illegal poker games.  The thinking within some departments seems to be, “We paid for the stuff, we might as well use it.”

If one accepts, as I do, the premise that SWAT teams are often misused, it’s important to understand why this is so.  One explanation that occurs to me may at first seem counterintuitive: the availability of military-style hardware has the effect of rewarding timidity on the part of police managers.  For example, when I first began participating in search warrants in the mid-1980s, the oversight for warrant preparation and service within the LAPD was minimal, with only my immediate supervisor and the lieutenant above him providing input under ordinary circumstances.  The tactical plans we drew up in preparation for warrant service were one or two pages, and the process of receiving information, verifying it, and then preparing and serving a search warrant might be accomplished inside of a few hours.

Today, the LAPD’s search warrant tactical plan is nine pages long, and the approval process, even before a warrant is presented to a judge, can go up the chain of command all the way to a deputy chief.  As in most police departments, one does not ordinarily advance in the ranks of the LAPD by being a seasoned investigator or tactical officer, but rather by avoiding these jobs.  So, when presented with a proposed search warrant, the timorous manager, knowing that his name will now be associated with the operation, asks himself two questions: What can go wrong, and how can I avoid being blamed for it when it does?  He then satisfies himself by directing that every available resource be devoted to the operation, whether tactically necessary or not.

But sometimes common sense is allowed to prevail.  On one occasion some of my coworkers pursued and captured a wanted armed robber, then prepared to search the man’s house under the terms of his probation.  Nothing in our investigation suggested even the possibility that any additional dangerous people lived at the home, which the robber shared with his grandmother.  A superior asked me if we were going to “tac up,” i.e. put on our helmets and heavy body armor and deploy our rifles, for the search.  I told him we were not.  “And why not?” he asked.  “Because we’d look like idiots,” I said.

I was blessed at the time to have a superior for whom this was a good enough reason.  I wish it were always so.