(Editor’s note: J. Christian Adams’ Crimes Against the Republic is available free for a limited time only, exclusively through the PJ Store.)

A Greenpeace activist supporting Senator Mark Udall has been caught on undercover video by James O’Keefe claiming “Ghetto Aurora” is a great town in which to commit voter fraud. I can’t find Ghetto Aurora on a map, but the activist says it is in Colorado.

It’s no surprise that the best place to commit voter fraud is Colorado.

If you deliberately tried to design an election system to aid fraud, here’s how you’d do it: you’d put ballots in the hands of folks that you have some indication no longer live where they did long ago. You’d make sure folks got ballots, even if many of the counties had more people on the voter rolls than people alive. Then you’d make sure that voting is decentralized, out of the sight of election officials, so that there is no way to know who is really voting on the ballots.

One of the first things Democrats did when they turned Colorado blue was to change the election system to all-mail.  Not content to just mail ballots upon request, Colorado took large numbers of voters who were inactive, and presto, converted them to active status. Everyone gets a ballot in the mail, whether they requested one or not.

Vote-by-mail puts our elections in the hands of the people who bring you your neighbors’ mail: the United States Postal Service. Remember that soaking wet pile of pulp they delivered once? Maybe next time it’s your ballot. Vote-by-mail advocates and Democrats (but I repeat myself) will tell you voting by mail is easier, and better, and sugar plums and unicorns. What they don’t tell you is that vote-by-mail is a system that empowers the criminal element.

The culture of lawlessness that exists in many parts of American life loves vote-by-mail.

James O’Keefe captured some of that lawless culture on tape. The “Happening Girl,” so familiar with “Ghetto Aurora” and how it might be a good place to find unused ballots, is part of that culture. We’ll get to her not-so-hidden racism in a moment. But Happening Girl wasn’t offended or shocked by the prospect of someone dumpster diving to vote multiple times. 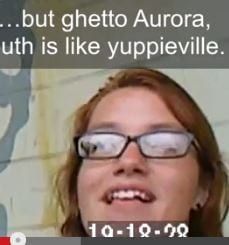 Vote-by-mail will send ballots out to people who no longer live where they are registered to vote. Vote-by-mail empowers left-wing ballot harvesters to go door-to-door, to not only collect ballots but to stand over voters and “help” them vote.

Nobody will see it. Nobody will be able to prove it happened very easily.

I had to prove identical circumstances once in a voter trial. Notaries in Mississippi were harvesting illegal votes in people’s homes.  It takes enormous time, resources, and luck to find voters willing to say they let someone else vote their ballot.

We proved it in Mississippi. I can assure you it is now happening in Colorado.

Villains always find a way to manipulate the system. Election systems should be designed to mitigate criminal lawlessness. So next time you hear someone say how great vote-by-mail is, and it should be adopted everywhere, remember: it unleashes the darker nature of many in America, and our elections will suffer.

Back to Happening Girl: remember she said that Ghetto Aurora is a prime location for dumpster diving for ballots?  Let’s unpack what she was really saying.

First, and you already knew this, Happening Girl called it Ghetto Aurora because she was referring to the racial minorities that live in Aurora, Colorado. It is 16 percent black and 29 percent Hispanic. Whites alone (meaning no mixed race) comprise only 47% of Aurora. She was saying that if you want to find ballots being sent to people who no longer live there or just get thrown into the trash, go to black or Hispanic neighborhoods.

We all knew what Happening Girl really meant — she was saying something that any conservative or Republican would make national news for saying. (I can see the headline now: “Rick Scott Worker Says ‘Ghetto Jacksonville!'”  “Thad Cochran Aide Calls Jackson ‘Blackson!'” “Mississippi Senator Praises Senator Thurmond’s Long Tenure” … oh, wait.) Happening Girl shows how charges of racism only travel in one direction across the political landscape.

But you already knew that.

Second, she reveals an undercurrent of lawlessness which voter “reformers” either ignore … or crave. When the election system is set up as it is in Colorado, bad things happen.  Progressives proposing election reforms that will result in lawlessness place too much faith in the goodness of people; realists know otherwise.

I am always amused by election “reformers” who crow: “Why would someone risk jail to commit voter fraud?” Prisons are full of people who did stupid things for little or no gain. Welcome to Earth.

Elections in Colorado are now vulnerable to the base natures of the people outside of prison.