Two Trillion and Counting: The Fed and the Magma Chart

The “magma chart” is the name that, according to a post on the New York Times’s Economix blog, is being given to a chart on the Web site of the Federal Reserve Bank of Cleveland that shows the Federal Reserve’s balance sheet growing to about $2 trillion from less than $1 trillion before the economic crisis.

The name probably refers to the shape of the chart, which looks something like a wall of magma or lava flowing downhill (President Obama, with his Hawaii background, should be able to relate). The striations indicating the various asset classes also look a little like one of those images in an Earth Science textbook showing the layers of the earth’s crust and core. 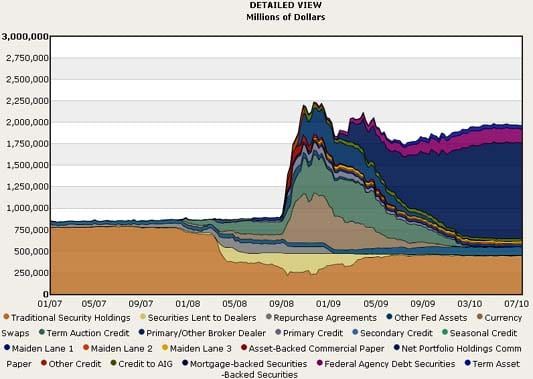 But so long as we are talking about molten rock, to me the real significance of the chart (along with the downward stock index charts since the Fed’s statement Tuesday afternoon) is the potentially volcanic political impact. Think of it — $2 trillion in government money, more than the entire annual spending of the entire federal government in 2001 — thoroughly insulated from the control of elected officials. The Fed is not funded by Congress, and its governors are not elected by the public. Rather, they are appointed for 14-year terms, during which they “may not be removed from office for their policy views.” The governors almost all have advanced degrees from fancy colleges; Chairman Ben Bernanke is a summa cum laude graduate of Harvard who got his Ph.D. at MIT and was a professor at Princeton (along with Nobel laureate Paul Krugman).

One of the emerging themes of the 2010 election, and the 2012 one, has been the rebellion against the rule of “experts.” The Wall Street Journal’s William McGurn summed it up the other day in a column linking together a bunch of different issues: “Whether it’s a federal judge declaring there exists no rational opposition to same-sex marriage, a mayor railing against those who would like a mosque moved a few blocks from Ground Zero, a Speaker of the House effectively likening the majority of her countrymen who did not want her health-care bill to Nazis, or a State Department official who brings up the Arizona law on immigration in a human-rights discussion with a Chinese delegation, the chorus is the same: You can’t trust ordinary Americans.”

In an article in the July-August American Spectator that attracted a lot of attention, including having excerpts read aloud on Rush Limbaugh’s radio show, Angelo Codevilla described the dichotomy between what he called “the ruling class” and the “country class.” The Fed is ruling class.

And so what about the possibility that it isn’t such a good idea to have a bunch of unelected, unaccountable Ph.Ds controlling $2 trillion worth of assets that they aren’t really personally on the hook for and didn’t earn?

The Fed’s actions are supposed to help the economy — the claim is that Bernanke and Co. have saved us from another Great Depression — but in the moment, with sagging stock prices and 9.5% unemployment, it doesn’t feel like a huge success.

Until now, skepticism of the Fed has been the province mostly of the left (Rolling Stone writer William Greider’s “Secrets of the Temple“) and of Ron Paul and his sometimes cultlike, conspiracy-minded followers (End the Fed).

But if the Fed is caught up in the broader populist revolt against the “ruling class” — a Congress that passes ObamaCare even as polls show most Americans oppose it, a judge that orders gay marriage even though Californians voted against it, a judge that suspends the Arizona immigration law even though the state government there approved it, a mayor that supports a mosque near Ground Zero even though it’s unpopular — watch out.

Sometimes unpopular laws or institutions or court rulings are necessary, even just ones. And sometimes decisions that are unpopular or controversial become less so over time as their wisdom is recognized.

But in cases where anger or frustration is justified and sustained, our political system usually provides an opportunity to rectify the situation. Voters can choose not to re-elect President Obama, or to make sure that Nancy Pelosi is minority leader rather than speaker of the House.

The really scary thing about that $2 trillion, though, is that it’s pretty much out of the voters’ control. Mr. Bernanke, appointed by President Bush, is still Federal Reserve chairman under President Obama, who reappointed him while promoting his colleague Timothy Geithner, who had headed the New York Fed, to Treasury secretary.

When Mr. Geithner, now working for Mr. Obama, proposed a public review of the Fed’s structure and governance, the Fed told him to get lost. Short of a legal challenge to the Fed’s constitutionality (getting unelected elites to overrule other unelected elites), all voters concerned about the magma chart can do is try to elect members of Congress who want to tackle the problem.

Since having someone else to blame for the economy’s performance is actually rather convenient for a member of Congress, and since voters have had quite enough “comprehensive reform” already, this is hardly a slam-dunk politically. But buried in the 2000+ pages of the Dodd-Frank financial regulatory overhaul was an “audit the fed” provision that could be the first stirring of Congress asserting its authority. Plenty of volcanic eruptions just start with a little bit of magma flow.