Soon after the Aurora mass murder, Washington Post columnist Ezra Klein waded into the fray, citing curious data to “prove” that we need more gun control to make society safer. But what he said and how he said things show he’s just another anti-rights elitist using tragedy to advance his agenda.

Klein displayed bias by claiming that not politicizing the Aurora shooting is only to halt discussing gun control:

The aftermath of the Aurora, Colorado shootings has been thick with calls to avoid “politicizing” the tragedy. That is code, essentially, for “don’t talk about reforming our gun control laws.”

His assumption is code for “the only desirable outcome here is more gun control.” Klein’s politicizing is okay; your desire to have a viable self-defense tool—and not be held accountable for a murderer’s actions—is not.

Mr. Klein, why has the civil right of self-defense become political?

Klein attempts to make six major points in his defense of gun control.

1. America is an unusually violent country.

Klein supports this assumption by citing a researcher’s graph of assault deaths in Organisation for Economic Co-operation and Development (OECD) countries. By conveniently ignoring most of the dataset, he made it appear that America is much more violent than any other country.

The latest United Nations homicide data show that America tied Argentina for the 50th most violent country, again using murder as an indicator. Like Klein’s graph, this dataset consists of OECD member countries, except for Tajikistan, which had a lower murder rate and didn’t affect our ranking. 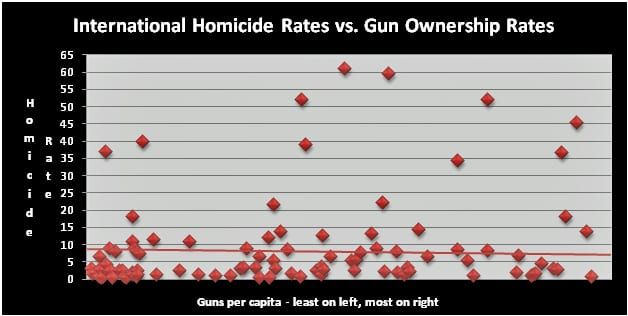 Curiously, Klein considers a country like Syria “less violent” because its murder rate is lower than ours. Government agencies provide crime data, and murders that are carried out by government are legal and therefore not crimes. So when Syrian security forces killed 44 protestors last fall—or when the UN says “more than 5,000 people have died in the uprising since March [2011]”— according to Klein, that’s not violence. But those 5,000 victims mean Syria’s murder rate was about 22 per 100,000 population in 2011, not the 3 per 100k reported by the UN.

This would tie it with Brazil for the 12th highest murder rate in the world. Acknowledging these truths would undercut Klein’s goal of politicizing a mass murder to build more reliance on government, because it’s government that murders the most people. University of Hawaii Professor Emeritus Rudy Rummel studied government-sponsored mass murder, and concluded that governments murdered 262 million people in the twentieth century. Totalitarian countries that disarm their subjects are the most violent.

2. The South is the most violent region in the United States.

Here’s one fact Klein had right. The FBI divides America into four regions: Northeast, Midwest, South, and West. In 2010, the South accounted for 41.5% of all violent crimes reported to the FBI. But Klein ignores relevant issues to create a simplistic conclusion.

In Florida, a Haitian illegal immigrant with a long rap sheet and deportation order murdered three people in their North Miami home. After Haiti’s 2010 earthquake, the president put deportations on hold, so ICE put him back on the street.

Obviously, illegal immigrants commit violence in other parts of the country. But simply saying the South is more violent ignores the impact of policies created by the government Klein believes will make us safer.

3. Gun ownership in the United States is declining overall.

Klein cited surveys by the National Opinion Research Center (NORC) and Gallup as evidence that gun ownership is declining in America.

NORC received $300,000 from the Joyce Foundation in 2011. Joyce also gave the Violence Policy Center $500,000, and VPC is proven to manipulate data to advance their agenda. Joyce’s “gun violence” grantees are all demonstrably committed to gun control.

The Gallup survey shows that since 1991, gun ownership declined about 3%. But it also shows that ownership is the highest since 1996. Gallup recently found that support for bans on handguns and semi-automatic rifles reached an historical low.

The National Rifle Association estimates there were about 65 million gun owners in 2000 and 100 million by 2010. But there’s a major piece missing in Klein’s discussion: gun ownership grew from 31% to 43% of the voting population.

CBS reported: “More women than ever are picking up rifles, shotguns, and handguns. And target shooting is one of the fastest-growing female sports.”

Women are also concerned about personal protection. From Florida ABC affiliate WTLV: “The number of women with a concealed carry permit in Florida was around 48,000 in 2004. By 2011 that number grew to 146,000.”

The Austin Statesman wrote: “According to the Texas Department of Public Safety, the number of women who got their concealed handgun license grew by 65 percent between 2006 and 2010, the latest year that data was available.”

After the Aurora shooting, the Denver Post reported an increase in gun sales. Said one gun store employee: “A lot of it is people saying, I didn’t think I needed a gun, but now I do.” 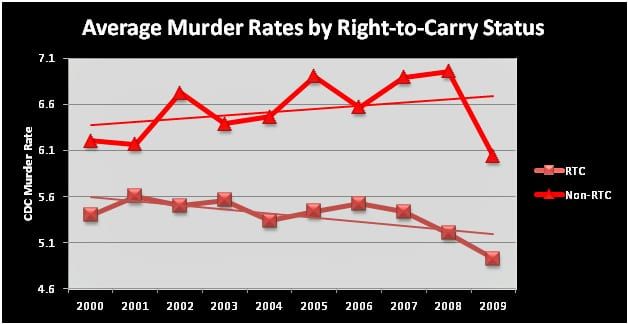 States with the most gun control had the lowest gun ownership, the highest violent crime and murder rates, and the highest non-firearms murder rates. In short, they’re the most dangerous places to live.

To arrive at this conclusion, Klein included suicides. But suicide is not violence. For example, law enforcement doesn’t charge attempted suicides with any violent crime unless there was an assault on another (e.g. murder/suicide).

6. Gun control is not politically popular.

That’s because gun control fails to work as advertised. Since the 1990s, pro-rights writers have been accomplishing top-notch research and getting the word out, resulting in more gun ownership and less stigma attached to being a gun owner.

There are 100 million gun owners of voting age, and they tend to be politically active. For example, many Democrats believe the Clinton gun ban was why Gore lost the presidential election.

Klein didn’t perform an objective analysis of all the data; his “research” is an op/ed. He simply wanted to complain that we’re minimizing the Aurora tragedy for political purposes. But the truth is: he’s promoting gun control, and his column was nothing more than an attempt to grab the moral high ground and shame people into exchanging liberty for the unproven fantasy that government makes us safer.