In a new report, the Centers for Disease Control (CDC) attempted to link firearms with violence, especially against children. The authors wrote: “Gun violence historically has been a problem in cities, and youths have been affected disproportionately.”

Finally, in 1996, Congress cut off gun control funding for the CDC — mainly because the NRA demonstrated to legislators the CDC was buying political misinformation rather than science.

Since then, they’ve attempted to reframe their agenda into “gun safety.” In the early 2000s, the CDC performed national gun ownership surveys. The survey’s codebook had interviewers asking people if firearms in the home were loaded and locked. The assumption was that a loaded, ready firearm was dangerous.

Numerous sources have concluded that street gangs have a significant influence on violent crime. A U.S. Department of Justice (DOJ) report noted:

At present, more than 20,000 gangs consisting of approximately 1 million members exist in the United States. Gangs are present in all 50 states, the District of Columbia, and all U.S. territories.

University of South Florida researchers reported a 20% increase in law enforcement agencies reporting gang problems between 2002 and 2005, with most of the growth in suburban and rural counties across America.

Massachusetts State Police dispersed 1,000 “youths” for fighting from Carson Beach in South Boston. The Boston Globe, which used the term “youth” 11 times in their article, reported “the troublemakers were mostly 14 to 19 years old” and that many were “gang members.”

Charlotte, North Carolina, experienced “many fights” and one person was killed. “In all, 70 people were arrested — including 15 juveniles.” Many flashed gang signs.

In Nashville, a water park shut down after a “significant number of kids grew impatient” and started causing trouble, including “several fights.” WTVF video shows that most of the trouble involved what CDC calls “youth.”

The CDC report covers “youths age 10-19 years.” Anti-rights researchers include real children (under age 15) with older teenagers and young adults, obfuscating this by calling them “youths.” Few children get murdered, but the image of thousands of children getting shot evokes readers’ strongest emotional response.

By mixing children ages 10-14 with older juveniles and young adults more likely to be in gangs, they leave room for misinterpretation. In 2007, there were 2,161 firearms homicide victims ages 0-19. Some interpret that as “6 kids a day murdered by firearms.” Of that total, 264 were children. While still serious, “0.7 children a day” doesn’t sound as dramatic.

Firearms homicide rates for children, already low at 0.95, dropped 54.7% between 1993 and 2007, to 0.43. The smallest rate decrease was in the population group outside this CDC study, age 20+. Children and juveniles saw greater-than-average rate decreases.

For ages 0-19, non-firearms suicide rates are higher than firearms rates, 1.19 and 0.82, respectively. Since 1993, the overall firearm suicide rate declined 23.2%, but the non-firearms rate climbed 16.3%. This increase included all age groups except children. If these trends continue, non-firearms rates may comprise over 50% of all suicides when the CDC releases their 2008 mortality data (see graph below). 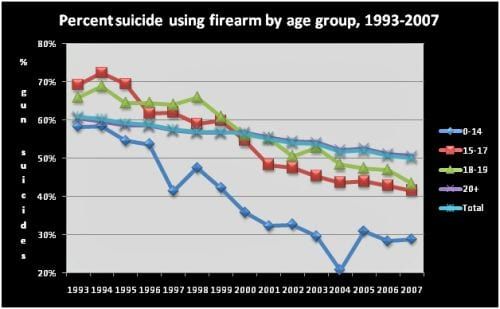 While any child’s death is an important concern, these CDC data indicate that when it comes to firearms-related violence, children have become much safer over time. 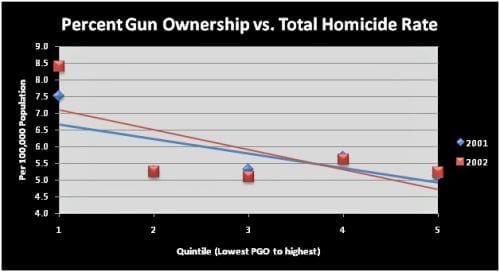 Regarding firearms homicide rates, Blacks benefited the most from living in high-PGO states. Spearman’s values were -0.90 in 2001 and 1.00 in 2002, strong and perfect negative correlations, respectively (more guns, lower homicide rates).

Data from the Bureau of Alcohol, Tobacco, Firearms, and Explosives indicate that between 1993 and 2007, about 79 million firearms were sold in the U.S. About 35 million of these were handguns. During the same time, CDC data show the national firearms homicide rate declined 40.4%, and the firearms suicide rate declined 23.2%.

The CDC persists in hiding their anti-rights agenda within their “gun safety” research, but they haven’t bothered to learn from their own data.