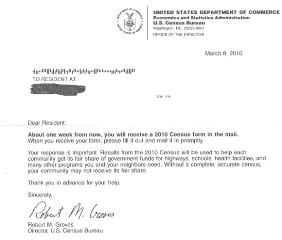 By now, perhaps you have received your “warning” letter from the Census Bureau. For those without eagle eyes to discern the picture above, here’s what it says:

About one week from now, you will receive a 2010 Census form in the mail. When you receive your form, please fill it out and mail it in promptly.

Your response is important. Results from the 2010 Census will be used to help each community get its fair share of government funds for highways, schools, health facilities, and many other programs you and your neighbors need. Without a complete, accurate census, your community may not receive its fair share.

You might wonder why a gun rights writer wants to venture into this topic, but remember that taxation is another way to ban guns, by reducing disposable income available for self-defense tools and training. Certainly, the anti-gun Brady Campaign understands this.

“About one week from now, you will receive a 2010 Census form in the mail.”

We’re spending millions of your tax dollars on a letter telling you that an important letter will be arriving soon. If we could have figured out how to send out a warning letter for this warning letter, we would have done it. After all, it’s not our money.

First we took your earnings as taxes. Next, we gave as much as we could justify to our corporate sponsors, and now we want to fool you into believing we care about you by throwing the remaining crumbs your way with great fanfare.

But first, you must grovel for it by giving us private information about your family. Forget that at tax time, we knew exactly who you are and where you live. That was a different computer system, and since it costs more to maintain multiple separate systems, we can justify raising taxes to cover the extra expense.

“… government funds for highways, schools, health facilities, and many other programs you and your neighbors need.”

We know it was originally your money, and you could have built schools and hospitals more economically had you maintained local control of it. If you don’t like it, tough [deleted expletive]. Besides, you didn’t spend hundreds of millions of dollars in campaign contributions in the last election, so you didn’t qualify for bailout money.

“Without a complete, accurate census, your community may not receive its fair share.”

If we divide the American people down to the community level and pit them against each other, they will be so busy fighting over the crumbs that we can continue splitting the pie between us and our corporate sponsors. Divide and conquer!!!

“Thank you in advance for your help.”

We were going to put a shorter word in front of “you” but decided to feign civility.