Covering Up the Real Storm that Has Destroyed Cuba

When the weather turns sour, most people tune into The Weather Channel. While the outlet usually does a good job covering meteorological phenomena and their human toll, what it’s shown over the last few days is that it is no better than the mainstream media when it comes to covering anything having to do with Cuba.

With much fanfare, The Weather Channel announced that for the first time in its 30-year history it had a correspondent reporting from Cuba. The man they sent is Mike Seidel, a longtime Weather Channel veteran.

At about noon EDT on Saturday, while watching The Weather Channel for an update on possible landfall of Tropical Storm Isaac in Florida, I was treated to an incredible piece of unjournalism. There was Seidel standing on the beach at an all-inclusive resort reserved for foreigners in Varadero, on Cuba’s northwest coast, despite the fact that Isaac was going to make landfall on Cuba’s southeast coast. Seidel assured us that “we picked Varadero because of meteorological reasons and are lucky because we’re staying at a resort with all the creature comforts of home.”

Seidel’s stand-up piece featured what he referred to as a “Cubano pool boy” dragging in and securing the lounge chairs. The video has since been purged from The Weather Channel’s website. 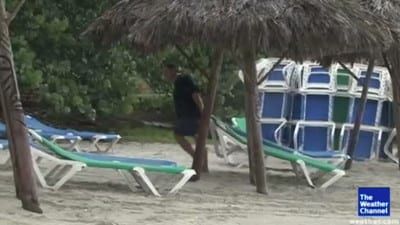 Over the course of the weekend, Seidel assured us that the Cuban military takes tropical storms and hurricanes seriously and is known for its “large-scale evacuations.” In speaking about the Cuban government, Seidel dutifully parroted the regime’s propaganda. “They tend to over-prepare, they don’t mess around. Fidel Castro’s mantra has been, really, we don’t want to lose any lives,” Seidel said. Of course, in Cuba the only legal arbiter of who lives and dies is Castro himself. It should be noted that Seidel gives no basis for these judgments and that he was making them from several hundred kilometers away, probably while enjoying a nice Havana Club Mojito.

When the storm’s effects were felt in Varadero, Seidel treated us to riveting footage of an overturned tiki hut. Oh, the humanity! At the other end of the island, however, the pictures tell a different story. In an a rare act of accidental journalism from Cuba, the Associated Press released these photographs.

Meanwhile, by comparison, The Weather Channel’s coverage from Haiti included a phone interview with representative from the International Red Cross who discussed threat of cholera, the state of danger for citizenry, and the ongoing humanitarian crisis. What’s notable is that in Cuba the Castro regime routinely restricts movement of members of NGOs like the International Red Cross, if they are even allowed to enter the island in the first place. Also, Cuba is in the midst of a cholera outbreak of its own, though we don’t know its extent because of the same cloud of propaganda and media controls. And cholera isn’t Cuba’s only ongoing health scare. The recent outbreaks of dengue and yellow fever will presumably worsen in the aftermath of any major storm. The Weather Channel was silent on the matter.

The truth about Cuba is that the state of infrastructure is disastrous, much of it predating the Castro reign. Fifty-three years of communist-style neglect has left most dwellings extremely susceptible to inclement weather. If buildings in Cuba collapse under their own weight on sunny days, what’s going to keep them up in a hurricane? And those buses and large-scale evaluations the military is famous for? Well, the file footage (no doubt provided by Seidel’s Castroite handlers) doesn’t show the devastation of previous storms and how the citizenry was left to fend for itself (like it did in these photos from the aftermath of Hurricane Ike in 2008).

If the regime can’t provide food and shelter under normal circumstances, how are we to believe that it can do so in an emergency? It simply doesn’t meet the smell test.

The Weather Channel is just the latest media outlet to agree to a Faustian bargain with the Castro regime, in which they consent to give away any journalistic integrity they may have had in order to maintain official access. Real journalism would have required making clandestine contacts on the island and using the citizen journalists who risk their lives every day to smuggle the truth about Cuba out of Cuba. But most media outlets are too lazy, unoriginal, and ideologically sympathetic to challenge the regime.

Incidentally, The Weather Channel is owned by NBC/Universal, which has an accredited bureau in Havana that brings such important stories as the world record-holding Cuban head bouncer and the 11-foot bicycle built by and ridden by a Cuban man. Wouldn’t want to risk their fake news bureau by reporting actual news, would they?