Look at the girl in the center of this picture. She’s Deng Linlin. Does she look 16 to you? To be eligible for the ongoing Olympics in Beijing, a female gymnast must turn that age no later than sometime this year. In gymnastics, prepubescent female competitors have a distinct advantage over older ones — their bones are more supple, they are lighter, they have less fear. 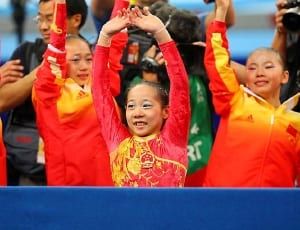 Deng in the picture is all smiles. She and her comrades made history by winning gold last Wednesday, edging out the slightly favored Americans in the women’s team gymnastics competition. Officially, the sweet Ms. Deng was born on April 21, 1992. But the 4-foot-6, 68 pound wisp may have come into this world on May 22, 1993 — or perhaps even later.

Ms. Deng is not the only Chinese gymnast with multiple birthdates. In fact, the spotlight this year has fallen on three of her teammates: Jiang Yuyuan, Yang Yilin, and the especially infamous He Kexin. China’s official Xinhua News Agency listed Ms. He’s age as 13 on its website just nine months before the Olympics began. China Daily, the country’s official English-language paper, said on May 23 she was 14. Records on an official Chinese website show that Ms. He was born on January 1, 1994. Liu Peng, director of general administration of sport in China, last November publicly said that she was 13. Of course, none of this matters now — during the middle of February Beijing issued to Ms. He a passport showing her date of birth as January 1, 1992, thus making her eligible to compete. And a Chinese gymnastic official dismisses the Xinhua report as “a mistake.”

Yet there is no mistaking what we can see with our own eyes. Chinese coaches tried to hide the ages of the girls with “enough makeup to shame a drag queen,” but no amount of lipstick and eyeliner can hide the fact that the American gymnasts have curves and breasts and the Chinese ones don’t. On average, the girls on the Chinese team are 3.5 inches shorter and 30 pounds lighter than their American counterparts. Bela Karolyi, the legendary coach of gold-medalists Nadia Comaneci of Romania and Mary Lou Retton of the United States, calls the members of China’s team “half-people.” They still have their baby teeth, he points out. Take a close look at the picture of the charming Ms. Deng, and you will find that she’s missing a tooth — her permanent ones have not all grown in. Yet she too is now listed in official records as — don’t be surprised — 16.

Age limits are never a problem for China. Yang Yun, who took home two bronze medals from the Sydney Olympics in 2000, admitted afterwards on Chinese television that she was 14 when she competed and that both she and her coaches deliberately fibbed about her age. As Karolyi exclaims, “What arrogance!” The Chinese don’t have to mess with stop-growth hormones; they just brazenly send in girls fresh from elementary school. Yet we should not be shocked by the audacity of Communist Party cadres. Since 1949 when they seized power, China’s leaders have sought to create an alternate reality for the Chinese people. Now, they think themselves so powerful that they expect the rest of the world to meekly accept their fabrications.

Will we? Said Liang Chow, the coach of disappointed American gymnast Shawn Johnson, “I believe the officials will deal with it.” Well, actually, they will not. The International Olympic Committee won’t get involved. Its spineless president, Jacques Rogge, initially said enforcement of the age limit was up to the Chinese gymnastics federation. When the controversy became too big to ignore, the International Gymnastics Federation examined the passports of the Chinese girls and said it was satisfied. Bruno Grandi, the federation’s president, said that not even a confession from the Chinese gymnasts would trigger a reopening of the eligibility question. Nobody, it seems, wants to offend the great nation of China.

Yet there is something that can be done. Chinese officials can forge birth certificates and issue new travel documents, but they cannot hide the girls themselves. 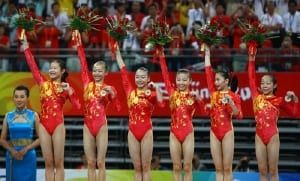 Sanjay Gupta, CNN’s chief medical correspondent, noted that medical tests can determine the age of children. “You could get X-rays, for example, of the hands, of the hips,” he said on Thursday. “There are growth plates which aren’t fully fused yet at a certain age. So, you can’t tell to a particular day. But within a few months or a year, probably get a pretty good sense how old somebody is if they wanted to investigate that.”

The IOC’s Rogge had no problem investigating and then condemning American track star Marion Jones because of doping. In December, the then-courageous official rightly took away the three golds and two bronzes she had won in Sydney in 2000.

Will Rogge change course and show the same strength of character now? There is nothing to suggest he will. And if his IOC won’t examine Deng, Jiang, Yang, and He, then I recommend that the committee just award all the women’s gymnastics medals from the London Games in 2012 to the Chinese at this time. The Chinese admitted to cheating in Sydney, and they are clearly cheating now. Why bother to hold the 2012 competitions in these circumstances? At least an advance award of medals would let people know what is really going on.

China has shamed itself. And so has the IOC.

Gordon G. Chang is the author of Nuclear Showdown: North Korea Takes On the World and The Coming Collapse of China.
Read more by Gordon G. Chang