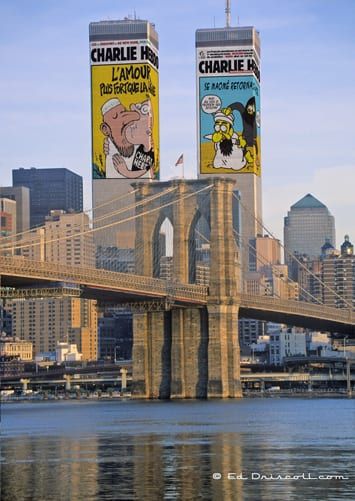 My friend Barbara Kay recently published a moving column mourning the twelve people killed at Charlie Hebdo. “Historically,” she writes, “the Islamist terror attack on Charlie Hebdo — I already think of it as 1/07 — will be seen as more devastating than 9/11.” The reason is that “those 12 people represented an institution that cannot be replaced with bricks and mortar. Those twelve iconoclasts were not collateral damage. They were the very spirit of freedom of speech, the pillar of democracy and free peoples everywhere. Spirits are not so easily rebuilt.”

It is a stirring piece expressing an unimpeachable sentiment. But the assault on Charlie Hebdo by no means marked a turning point, as she appeared to suggest. Far from a unique event, the Muslim campaign against free speech has been going on for many years now. Freedom, the right to dissent, the satirical genre — all have been dying for some time.

It’s been a long time since most ordinary or even celebrated people would dare to represent Mohammed or say anything mocking or even critical about the religion of hate. Our pusillanimous leaders and members of the intelligentsia buckled under to Islamic triumphalism some years back and evince a growing tendency to Sharia-compliance. If, after the Danish cartoon controversy, every single intellectual or public figure of any note had posted the cartoons, we would be in a different place today. But instead they joined in the chorus about responsibility and not unnecessarily offending pious people.

My own country, Canada, is traveling the same route to cultural perdition. Anti-Islamic firebrand Eric Brazeau, just sentenced to a year and a half in jail for reading out the Koran on a subway train, marks the same watershed. And the much maligned Ezra Levant, one of the few courageous journalists who actually printed the Danish cartoons as legitimate news depicting what the violence was all about, was sued by an offended imam, lost his magazine The Western Standard, found himself over $100,000 poorer, and is once again fighting in court. Few of us can approximate to his moral stature and his willingness to put himself on the line for an essential cause.

Meanwhile, the hundreds of journalists around the world wearing Je Suis Charlie banners don’t have the cojones to show what Stephane Charbonnier and his colleagues died for. And how many of our news outlets have actually reported the whole story, cartoons and all? The failure to defend our freedoms began ages ago when almost no one had the clarity of vision and the moral courage — certainly not our journalists, our politicos, our academics, our intellectuals, our entertainers — to man the barricades and fight against those who would deprive us of our rights. In fact, many of these pundits and news outlets saw fit to blame the victims for provoking the jihadists. This isn’t just a paradox; it’s bad faith, cowardice, hypocrisy and a form of cultural treason of the highest magnitude.

We are told ad nauseam that the terrorist atrocities we are witnessing on an almost daily basis have nothing to do with Islam — this despite the 25,000-plus Islamic-inspired terrorist attacks since the slaughter of 9/11. As for the bloodbath at Charlie Hebdo, the disavowals quickly set in. French president Francois Hollande lost no time flogging the tired mantra, assuring us with a straight face that the Charlie Hebdo perpetrators were “fanatics who have nothing to do with Islam.” Assem Shalaby, president of the Arab Publishers Association, has condemned “this vicious attack that contravenes the principles of Islam and the message of its prophet” — which it manifestly does not, as anyone even passably familiar with Islamic scripture, jurisprudence and orthodox commentary is immediately aware. Clearly, Josh Earnest, President Obama’s press secretary, is not, deponing on CNN that the Paris murders violate “the tenets of an otherwise peaceful religion” — unless, of course, like his master, he is lying through his teeth. At the same time, to cite Honest Reporting, “Conspiracy theorists and anti-Semites claim Israel is responsible for the Charlie Hebdo terror attack. The International Business Times supplies the oxygen” — as does CNN and, of course, the ever dependable Ron Paul. True to form, plying a double disclaimer, the BBC described the event as “an apparent Islamist attack.” A win-win for Islam.

Indeed, the expression of official horror over the Paris tragedy and the discharge of mass sympathy for its victims were only convenient forms of evasive self-flattery in the absence of both foresight and political action that might have prevented this atrocity, as well as so many others. How much more bracing and honest the response of Israeli author Bat Zion Susskind-Sacks, who writes of the Paris Unity March (“this dog and pony show”) attended by international criminals and jihad sponsors like Turkish prime minister Ahmet Davutoğlu and Palestinian president Mahmoud Abbas: “NO, I am NOT Charlie! I am the four Jews who died in the hostage situation in Paris on Friday; I am the four praying Rabbis who were slaughtered in their Synagogue in Nof Yofeh in Yerushalayim last November; I am the little baby who was killed at the stop of the Light rail, when a terrorist drove his car directly and purposely into the crowd waiting for the tram to arrive; I am the 3 Yeshiva students who were kidnapped and slaughtered in cold blood by Hamas Islamist Jihadists in Judea last Summer.” Her point is unexceptionable. I have not seen anyone marching in Paris wearing an apron reading Je Suis Hyper Cacher.

Freedom of expression is on life support and the powers that be are ready to pull the plug. The moral qualities of honesty and courage — honor as traditionally understood — now languish atavistically in the cultural and political wasteland of the West. The dark continent of Europe, the Commonwealth nations, and America seem prepared to extinguish themselves as they promote the erosion of values that once sustained them — in iconic terms, the triumph of a fatuous grotesquery like Michael Moore over manly duty represented by Chris Kyle. We live in an “official” culture in which cowards call heroes cowards and alien prophets are welcomed as benefactors. The only ray of optimism in this desolate landscape emanates from the small but illustrious band of truth-tellers still active among us. It’s not much, but it’s all we have.

David Solway is a Canadian poet and essayist. He is the author of The Big Lie: On Terror, Antisemitism, and Identity, and is currently working on a sequel, Living in the Valley of Shmoon. His new book on Jewish and Israeli themes, Hear, O Israel!, was released by Mantua Books. His latest book is The Boxthorn Tree, published in December 2012. Visit his Website at www.davidsolway.com and his Facebook page here.
Read more by David Solway