A Great Reckoning in a Little Room 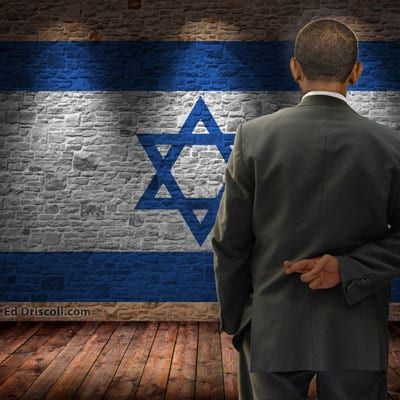 Back in July of 2008, presidential candidate Barack Obama visited Sderot, the southern Israeli city battered by rocket fire from Gaza, and delivered a speech emphasizing Israel’s right to defend itself and stressing that “peace should not undermine its security.” He vowed that he would not, as president, force Israel to make dangerous concessions and warned that “the world must prevent Iran from obtaining a nuclear weapon.” The Israeli leadership — not least the irresponsible and spineless Ehud Olmert — and many of the country’s citizens, including the leftist, anti-Zionist newspaper Haaretz, could scarcely restrain their enthusiasm for the fine words and noble sentiments expressed by the president-in-waiting.

The speech was a stirring one for those who had not tracked Obama’s less-than-stellar record to that date, who had not examined his chequered past and problematic mentors and acquaintances, and who wanted desperately to believe in the empty mantra of “hope and change.” As I watched the YouTube* clip of Obama’s address and listened to those familiar sinusoidal cadences, I knew instantly that the man did not mean a word he said, a conclusion that anyone who had done his homework would have reached. Regrettably, it has taken much of the world five more years to realize that Obama is a trained prevaricator of the first water, whether the issue is government transparency, receding oceans, competitive bidding, citizen surveillance, deficit cutting, the closing of Gitmo, unilateral military action, Fast and Furious, Obamacare, and, in the realm of foreign policy, Iran and Israel. Obama’s evasions and hollow assurances on this latter file demonstrably imperil the future of the Middle East and, quite possibly, the safety of the planet. It certainly spells imminent danger for Israel.

A recent article by Jerusalem Post columnist Caroline Glick claims that the nuclear deal reached with Iran, eagerly pursued by the Americans, was “not just to prevent Iran from becoming a nuclear power…the goal of Obama’s foreign policy is to weaken the state of Israel.” Her thesis is cogently argued and based on persuasive evidence. Behind-the-scenes negotiations have been going on for an entire year, “yet the deal reflects Iran’s opening position.” Since nothing had changed from day one, why did Obama wait until the present moment to conclude an agreement?

The answer Glick provides makes considerable sense. Obama needed the year to marginalize the Jewish state, to work against its interests by portraying it as a belligerent nation trying to conscript the U.S. into an unnecessary war, and compelling it once again to enter negotiations with the Palestinian Authority “engineered to weaken Israel strategically and diplomatically” and furnishing support to the European Union’s propaganda blitz and economic war against it. Obama knew full well that Israel’s inevitable rejection of the Palestinians’ outrageous and unacceptable demands would make the country look intractable and bellicose to a denunciatory world. Within that portico time-frame, Obama gave his blessing to the anti-Zionist Jewish organization J Street, appointed anti-Israeli officials to key positions, and managed to embarrass the pro-Israel lobby group AIPAC. “When we consider Obama’s decision,” Glick writes, “to wait a year to sign the deal that enables Iran to become a nuclear power in the context of his main activities over the past year, we understand his foreign policy.”

Glick’s analysis should not come as a surprise. One recalls the contemptuous usage Obama meted out to Benjamin Netanyahu in their March 2010 encounter in the White House, with the Israeli prime minister ushered in furtively through the back door, left to stew in a room while Obama dined with his family, and unceremoniously ushered out minus a photo session and a joint statement between heads of state. It should have been clear by then, if not years earlier, that Obama’s geopolitical intention was to box Israel in and to treat the Jewish state as an international pariah. The humiliation suffered by Netanyahu was a kind of tableau vivant, a metaphor or analogy of the treatment Obama had in store for the country itself.

The interim agreement signed in Geneva was implicit in that vulgar White House drama, establishing a political homology that was to play itself out three years later. The relation between Obama and Netanyahu in the White House meeting reflected and prefigured the relation between the U.S. and Israel on the international and diplomatic stage, culminating in an agreement with Iran in which Israel had no part and was effectively ostracized. To say that Obama has no love for Israel is to put it mildly.

It would be interesting in this context to see the Khalidi/Obama video squirreled away by the Los Angeles Times. Rashid Khalidi, a former PLO spokesman and current Edward Said Professor of Modern Arab Studies at Columbia University, makes no secret of his hatred for Israel. Obama and Khalidi were good friends, and as Discover the Networks reports, “In 2003 Obama would attend a farewell party in Khalidi’s honor when the latter was leaving the University of Chicago to embark on his new position at Columbia.” The event was filmed and one may plausibly wonder what revelation the LAT is suppressing with regard to Obama’s participation, especially as Obama had praised Khalidi for having “challenged my thinking.” Israpundit’s Ted Belman puts it succinctly: “What was said at this event was presumably so damaging to Obama’s political career that the LA Times, that liberal bastion, who came into possession of a tape of the event, refused to release it.”

In any case, everything Obama has done vis à vis the Jewish state — favoring anti-Zionist rabbis and organizations, inveighing against housing construction in its own capital city, supporting the Palestinians in fruitless rounds of “peace talks,” insisting that Israel retreat to its indefensible pre-1967 borders, leaking military secrets about Israeli pre-emptive actions against Syria and Hezbollah — indicates that Obama would like to see Israel confined to a tiny sliver of land, boxed in between the sea and the Arabs, reduced to a rump state at the mercy of its enemies, and eventually ushered out of the corridors of history. This puts him in league with the ayatollahs. This is Obama’s version of the knockout game.

Obama, of course, is programmatically deaf to the reasoned arguments advanced by Netanyahu: that the Palestinians are practiced deceivers and that their historical narrative of origins is provably false; that building in Jerusalem and the E1 area is verifiably legal; that retaining a portion of the Israeli ancestral and mandated homeland in Judea and Samaria, in particular the Jordan Valley and Judean Hills, as determined by no less an authority than the U.S. Joint Chiefs of Staff, is necessary for defensive purposes (the memorandum and map were declassified on March 30, 1983); that an emboldened and nuclear Iran is bad for Israel, the U.S and the world; that functioning sanctions against Iran should not be dismantled without an ironclad guarantee of nuclear shutdown and foolproof monitoring; and that Israeli strength and Israeli technology benefit America. Netanyahu must feel somewhat like Touchstone in Shakespeare’s As You Like It: “When a man’s verses cannot be understood nor a man’s good wit seconded with the forward child, understanding, it strikes a man more dead than a great reckoning in a little room.” (This “great reckoning in a little room” refers to the murder of Christopher Marlowe, struck down in a tavern under mysterious circumstances.)

If Iran crosses the nuclear threshold, these premonitory words will apply to Israel as well.

*This is a truncated version of Obama’s Sderot speech; I was unable, several years later, to find the complete video clip.