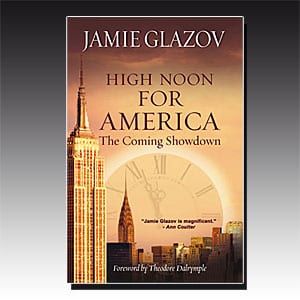 Jamie Glazov’s previous book, Showdown with Evil, was a collection of interviews he’d conducted over the years with resonant figures in the political world and authors of international standing. Glazov has now followed suit with High Noon for America: The Coming Showdown, a collection of symposia, dating from 2008 to 2011, which he hosted and then compiled. These consist in the main of erudite and compelling discussions treating of the major issues of the day: the threat of radical Islam (a blatant pleonasm), Communism and the heritage Left, the waning of American power and influence, and the gradual but accelerating atrophy of the Judeo-Christian faith community which formed the bedrock of Western civilization.

High Noon is a compendium that deals with “the really big ideas,” as Daniel Greenfield writes in his review of the book, which are in effect “too big for answers, only for observations.” Big ideas, we might add, do not typically beget small responses or narrow perspectives—except, of course, from the terminally deficient—and the vistas these symposia open on the history of political thought and practice encompass horizons of provocative reflection. They traverse the contemporary via dolorosa from the misnamed “Arab Spring” (“really,” Glazov says, “just an Islamic supremacist Winter”), to the resurgence of “the Evil Empire” controlled by KGB thug Vladimir Putin, to the tragedy of the politically correct, self-constraining, defeatist culture of the West that refuses to even name the enemy that plots its destruction, to the demonic nature of the ideological Left making common cause with a ruthless and dedicated adversary, to questions of economic independence and spiritual authenticity.

Some of the symposia are retrospective, examining the forces that have driven the events we are now experiencing (“The Red Arabs”; “The Shadow of the KGB”). Others are almost uncannily prospective, if not prophetic, as, for example, the discussion on “The Mismanaged War Against Libya,” in which the participants point out that the aftermath of the revolution may eventually prompt us to regard the murdered Gaddafi with nostalgia. Recent events in Benghazi confirm their prescience.

The volume, then, is distinguished not only by its archival substance and empirical wisdom (a synonym for clear-sightedness and common sense), but by the impressive variety of its subjects, arguments, insights, and sources of authority. Naturally, given the diversity of the dramatis personae and the fact that these installments are essentially conversations, there will be some unevenness in quality, tone, and rhetorical elegance, and several tend to range beyond the titular subject of the book, but the level of debate and reasoned formulation remains consistently arresting. And a number of the symposia are virtual knockouts, theatrical-like performances that merit extension, as I imagine, into the genre of the “philosophical film,” like “My Dinner with Andre,” “The Quarrel,” and “Mind Walk.” This, to my mind, constitutes the book’s peculiar and distinctive strength. The symposia that fit into this category each generate a kind of storyline and create a sense of intellectual tension, modulated in talk, that render the comparison apt.

Michael Ledeen comments in Symposium 2 (“The Red Arabs”) that “this conversation could easily be expanded into an invaluable little book.” Indeed, many of these discussions could be developed and transposed, as I have suggested, into an interesting dialogic documentary or “philosophical film,” unveiling the secrets of the Soviet influences on the Middle East or the roots of the Arab Spring that spell disaster for the West, all in the give-and-take of spirited discourse. It is the dramatic element inherent in these exchanges that imparts a cinematic aspect to the proceedings, reminding us that words and ideas can have kinetic power. One can visualize the protagonists, as in My Dinner with Andre, sitting around a restaurant table, engaged in earnest parley replete with lofty speculation, suspenseful pauses, personal revelations—embellished, perhaps, with a subtle soundtrack and occasional flashbacks—as the stagecraft of ideas plays out under Glazov’s adroit direction. There is something vivid and immediate about many of these productions, and the insights they provoke are richly instructive and often riveting.

In Symposium 12 (“Radical Son: The Ten Year Anniversary”), for example, Philip Terzian proposes that radical leftism “constitutes a mental, rather than political, syndrome, explained better by psychiatry than philosophy”; and Paul Hollander broaches the “ancient question” of the inexplicable differences in people’s “moral sensibilities, or thresholds of moral indignation.” Glazov introduces Symposium 8 (“The Fear that Wilders Is Right”) by pointing out what should be obvious but is generally suppressed or denied, namely,  that “‘moderate Islam’ is nowhere to be found; no school of Islamic jurisprudence exists that counsels Muslims to renounce the Qu’ran’s teaching on Islamic supremacism and the obligation of violent jihad”; and by attempting to explain why such stalwart conservative figures like Glenn Beck and Charles Krauthammer have attacked the noble and embattled Geert Wilders. In Symposium 11 (“The World’s Most Wanted: A ‘Moderate Islam’”), Danish psychologist Nicolai Sennels documents the perverse sexual trends in the Muslim world, the devaluation of women, and the striking frequency of pedophilia, rape, and bestiality, concluding that “no other culture prevents emotional maturity more than the Muslim.” The polite dispute in Symposium 6 (“The End of a Superpower?”) on the much-feared military and economic decline of the U.S. pits James Carafano, who warns of the danger of complacence in three key trouble spots—security, science and immigration—against the sunnier-tempered Robert Lieber, who stresses American resilience and innovation: the unspoken assumption is that they can’t both be right and a degree of restiveness is detectable beneath the veneer of mutual cordiality.

These instances represent merely a brief selection of the disclosures and reflections that await the political consumer, who may find himself slowly beginning to feel less like a reader poring over a book and more like a viewer watching a verbal drama unfold before his eyes. In sum, High Noon for America is a volume whose “scenes” are, in the words of Steven Emerson, “so intellectually fascinating that you will be glued to your seat.” It is well worth the price of the ticket.